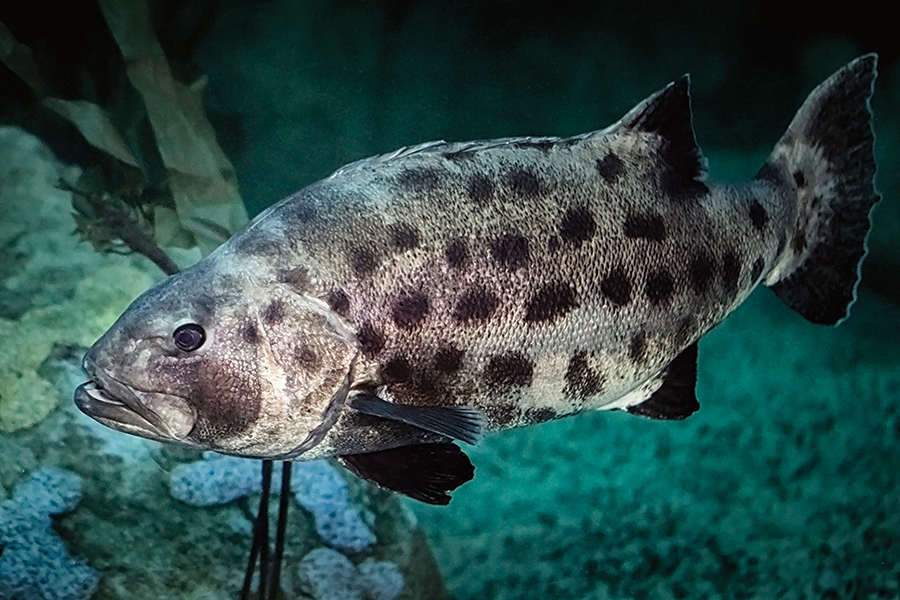 Scientists at the University of California, Santa Barbara (UCSB), have developed a website that will gather photos of giant sea bass to track these endangered fish and answer questions about their habitat, movements, and other information. Spotting Giant Sea Bass is a citizen science project that will allow the public to get involved in conservation and gather data to help scientists studying this species. The Aquarium is helping to spread the word about this program and encouraging divers, fishers, and snorkelers to submit photos to the site.

Capable of growing bigger than an average-sized grizzly bear, and as imperiled as the black rhino, giant sea bass are the largest bony coastal fish in California. They can live to be 75 years old and can exceed 7 feet and 500 pounds. Most importantly, their ecological contributions as an apex predator in kelp forest ecosystems likely help to shape how these underwater forests work. To effectively recover this species, which is categorized as critically endangered by the International Union for Conservation of Nature’s Red List, marine biologists need more and better data.

The idea for the project was born when two UCSB undergraduates, Conner Jainese and Katelin Seeto, discovered that each giant sea bass carries its own unique spot pattern that can be read like a barcode to identify individuals. The Spotting Giant Sea Bass website makes matches by using pattern recognition algorithms first developed by astrophysicists to spot patterns in star constellations and later used by NASA on the Hubble Space Telescope.

Giant sea bass spots form a miniature “constellation” on their flanks. The program leverages the unique spot pattern of each giant sea bass recorded to match up fish sighted on different days and in different places. Divers who upload a photo of a giant sea bass can receive notifications when “their” fish is spotted by another diver.

Data collected from the project help marine biologists better track the ups and downs of the giant sea bass population, determine whether they are using marine protected areas, identify their spawning grounds, calculate how far these fish move, and identify the threats they encounter on their travels.