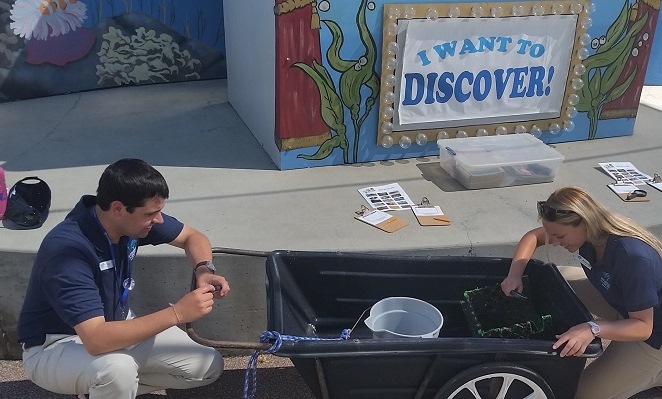 Nico Heyning and Ali Patton handle a specimen sample during the Critter in a Crate show. Aquarium of the Pacific

Using a citizen science website and app maintained by the California Academy of Sciences called iNaturalist, Aquarium visitors and staff members are logging their observations of local marine life as part of its shows in the Marine Life Theater. The Aquarium’s education department added this element to its Critter in a Crate shows, which give visitors the chance to see animals, algae, and other organisms in a specimen sample collected daily from nearby Rainbow Harbor.

About two years ago, the Aquarium began suspending milk crates on a length of rope in the water at the end of Dock 2, where the daily whale watch boats depart. After a period of time, the crates are brought up with an accumulation of diverse marine life typically found on dock pilings and the undersides of boats. These organisms are collected and brought to the Marine Life Theater for Critter on a Crate, allowing the audience to see the various ocean animals that live right outside the Aquarium.