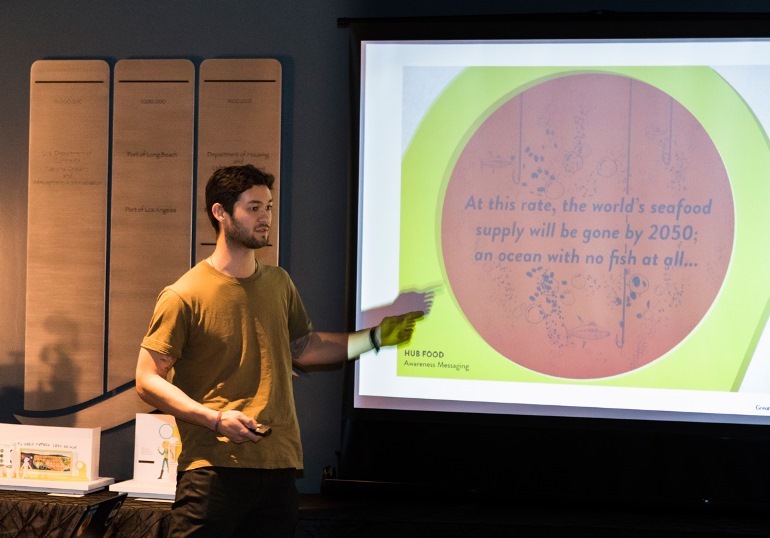 Three prototyped installations were presented to Aquarium staff members at the mid-term.

The Aquarium has partnered with the ArtCenter College of Design in Pasadena, California, for nearly a decade. Students in the Designmatters program work with Aquarium experts to learn about ocean and environmental topics to create design projects that address these issues. In 2016 the two partner institutions were awarded a grant from the National Endowment for the Arts to develop projects focusing on climate change and coastal resiliency.

The Aquarium and ArtCenter developed the Resilient Coastal Cities Studio to challenge students to conceptualize, design, and create an exhibit that would effectively communicate a call to action for the residents of Long Beach and other coastal cities for resiliency in the face of climate change.

During the course of the term, students visited the Aquarium to observe visitors and learn the facility’s layout. They worked with the Aquarium’s education staff to learn more about climate resiliency and what local residents can do to contribute.

Divided into teams, students worked on three distinct exhibition ideas – concepts that would eventually be merged into one unified exhibition including graphic panels, media/film, interactives and 3D models within a modular, expandable exhibit system.

Three prototyped installations were presented to Aquarium staff members at the mid-term. Students gathered feedback and incorporated it into a shared vision project which was presented at the final. A select group of students will continue the design process in a Development Seminar during the spring 2017 term. The outcome of this seminar will be used in future exhibits at the Aquarium.