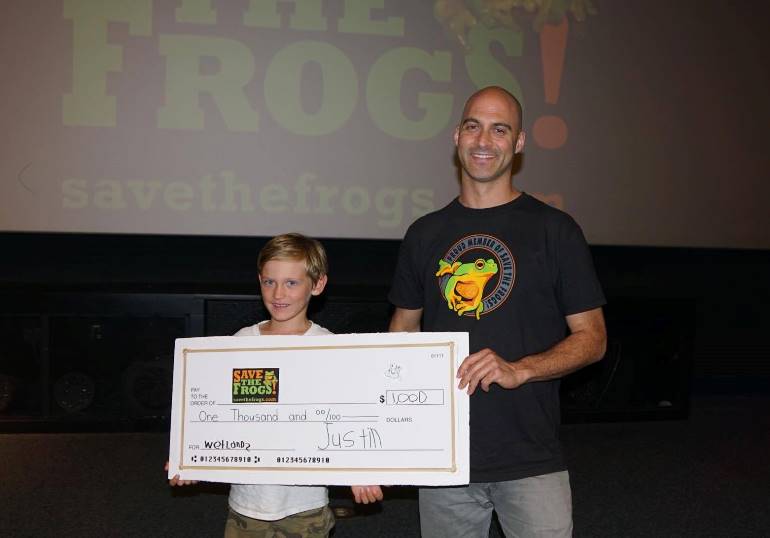 Six-year-old Justin Sather presents a check for $1,000 to Dr. Kerry Kriger, founder and executive director of Save the Frogs!

Justin Sather is six years old and has loved frogs for most of his life (his favorite frog species is the strawberry poison dart frog). When he learned that about one-third of frog species are threatened with extinction, he wanted to take action. His parents looked online for an organization working to benefit frogs and found Save the Frogs! Justin wanted to raise money to benefit Save the Frogs! and its mission to “re-frog America” by selling frog toys.

Justin also wanted to help two local threatened frog species, California red-legged frogs and foothill yellow-legged frogs. Justin teamed up with the shoe company Go PLAE and persuaded them to donate a portion of their sales to his frog fund as part of their PLAE-it-Forward Program. Justin used this program to raise money to build more wetlands in California.

When Justin’s family learned that Save the Frogs! founder and Executive Director Dr. Kerry Kriger would be speaking at the Aquarium in August, they contacted him and ended up offering to pick him up at the airport and give him a ride to the Aquarium. During the ride, Justin was able to interview Dr. Kriger and learn even more about his favorite animals.

After the lecture, Justin presented a check to Dr. Kriger for $1,000 for Save the Frogs! An Aquarium frog keeper on hand at the lecture ended the night by providing Justin and his family a private behind-the-scenes tour of the FROGS: Dazzling and Disappearing exhibit, which they had visited right after it opened.

To learn more about his fundraising campaign or make a contribution, visit Justin’s donation page.