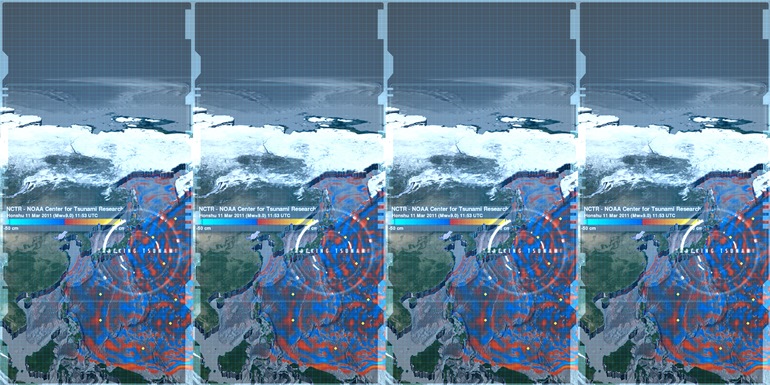 This still from the show, Fukushima and Our Radioactive Ocean, illustrates the tsunami that struck Japan in 2011 and caused the nuclear power plant accident.

On March 11, 2015, the fourth anniversary of the Japanese earthquake and tsunami, the Aquarium debuted a new show about the Fukushima nuclear accident and its impacts on humans and marine life. The show was developed in collaboration with scientists from the Woods Hole Oceanographic Institution (WHOI) and plays daily in the Aquarium’s Ocean Science Center. The show created for the National Oceanic and Atmospheric Administration’s Science on a Sphere® aims to educate the public about sources of naturally occurring and man-made radioactivity in the ocean, as well as how much radioactivity was added by the Fukushima accident.

In March 2011 one of the largest earthquakes ever recorded shook Japan for nearly six minutes, creating a devastating tsunami that engulfed more than 200 miles of Japan’s coastline. Nearly 16,000 people died. The tsunami also damaged the Fukushima Daiichi nuclear power plant, resulting in the largest accidental release of radioactivity into the ocean in history.

This collaborative project was funded by a grant to WHOI from the Gordon and Betty Moore Foundation.