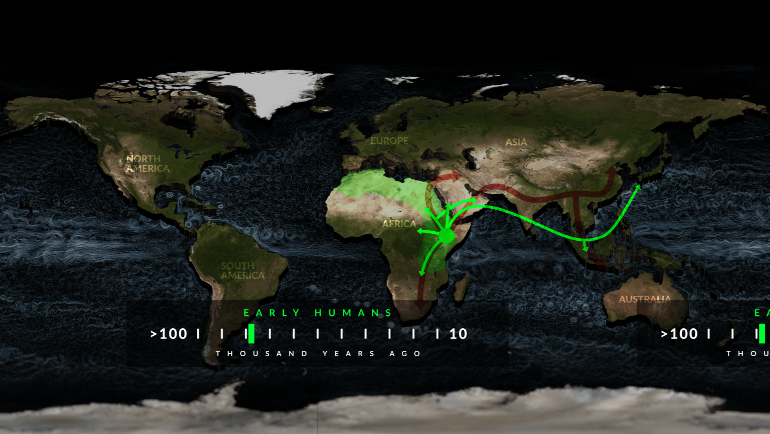 We Are All Related: The Dispersal of Humans Across the World movie still Aquarium of the Pacific

The Aquarium of the Pacific has developed a new show for the National Oceanic and Atmospheric Administration’s (NOAA) Science on a Sphere®. Playing daily in the Aquarium’s Ocean Science Center, the show traces human history from our species’ origins in Africa 300,000 years ago to our current population of 7.5 billion. It details how humans dispersed out of Africa and how changes in climate and environment affected populations’ movements and increasing diversity. It also reflects on the growing impact of humans’ on the environment with the hope for creating a more sustainable future for generations to come.

The new show is titled We are All Related: The Dispersal of Humans Across the World and is funded by a gift from John Molina, Aquarium board member. It was created by the Aquarium’s in-house audio visual staff with music by Icarus Music. The show was written by Agustin Fuentes, Aquarium of the Pacific President and CEO Dr. Jerry Schubel, and Margaret Schubel. Fuentes is a professor and chair of anthropology at the University of Notre Dame. It is the Aquarium’s fifteenth original show created for NOAA’s Science on a Sphere, all of which are available to the more than 100 institutions around the world that house a Science on a Sphere.