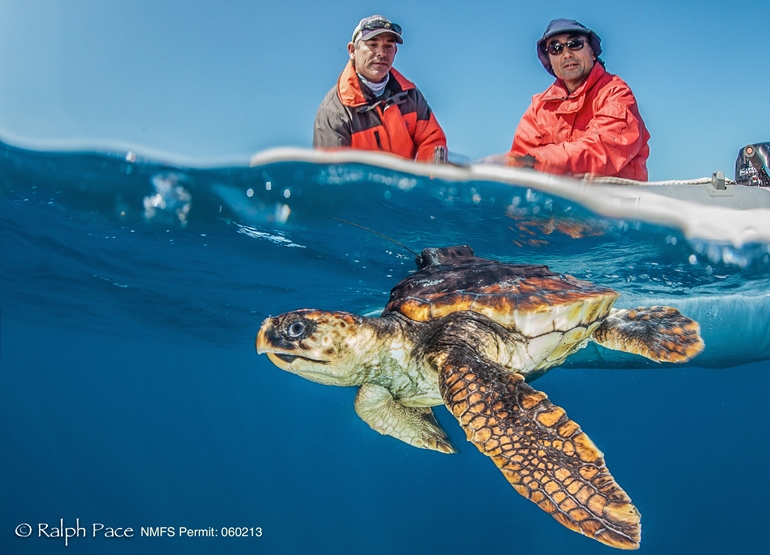 The first-ever loggerhead sea turtle to be tagged off the U.S. West Coast, along with two of the NOAA Fisheries scientists who tagged him, Jeff Seminoff (left) and Tomo Eguchi. NOAA

A juvenile loggerhead turtle rehabilitated at the Aquarium was released by National Oceanic and Atmospheric Administration (NOAA) Fisheries scientists off the coast of San Diego in April. The turtle, a male, was the first loggerhead to be fitted with a satellite tag to track its movements.

The location data provided by the transmitter will help answer questions about loggerhead habitat. Previously, this has been a mystery because the juvenile turtles are small and difficult to spot in the wild, scientists say. This new information will also help NOAA Fisheries to better protect these turtles. Scientists applied the tag to the turtle with a new method that will accommodate its growth as it matures.

The juvenile loggerhead was first picked up by a U.S. Coast Guard vessel early in spring. After receiving medical attention at the Aquarium, the turtle was deemed healthy and fit for release. As of May 29, the turtle had traveled more than 120 miles since its release, first heading north between the Channel Islands toward the coast of Santa Barbara before heading south to the waters off Baja California, Mexico. To see the latest maps tracking the turtle’s movements, visit seaturtle.org.