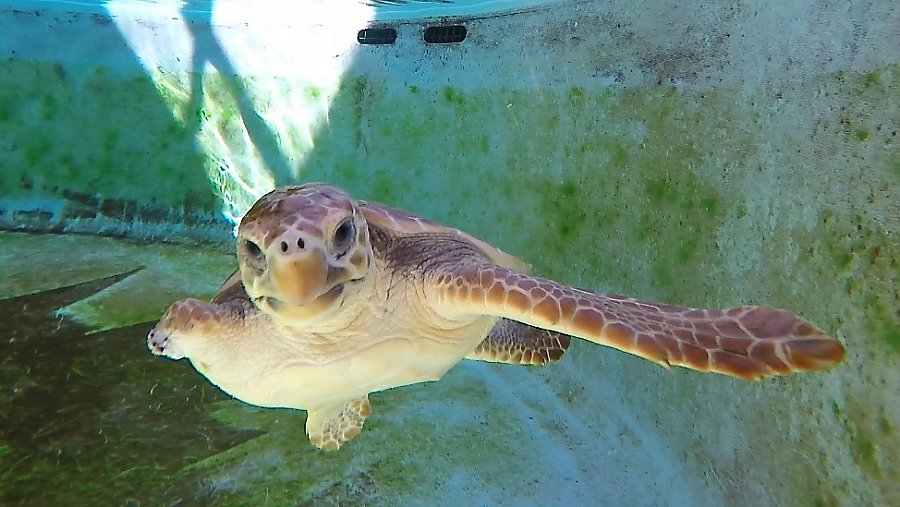 Char Char recuperated after surgery in a holding tank at the Aquarium. Hugh Ryono

A juvenile loggerhead sea turtle that came to the Aquarium in September with an injury was rehabilitated by the veterinary staff and released back into the ocean in November. The sea turtle was named Char Char after a Pokemon character. Because of the turtle’s size, experts estimate it to be around two or three years old.

The National Oceanic and Atmospheric Administration’s National Marine Fisheries Service (NMFS) officials asked if the Aquarium would provide housing and care for the injured sea turtle. Aquarium Veterinarian Dr. Lance Adams placed it in a behind-the-scenes holding tank. While the turtle appeared to be in good health, it had a dislocated right front flipper, apparently due to some previous injury. Dr. Adams determined that the flipper would never function and in fact impeded its ability to swim properly. He made the decision to amputate the flipper at the elbow joint. The turtle made a full recovery from the surgery and NMFS biologists determined an appropriate release date and location.

Char Char was equipped with a SPOT-5 satellite transmitter affixed to the shell via the ‘Seney and Mansfield’ technique, which used flexible neoprene as a middle layer to allow for rapid shell growth as expected in small juvenile turtles. Char Char was released on the east side of Catalina Island on November 15. In just a couple days, Char Char had traveled about 30 miles south to San Clemente Island. A map recording Char Char’s movements is available on seaturtle.org, a website providing satellite tag data from sea turtles and other animals around the world.

Jeffrey Seminoff, who leads the NMFS Marine Turtle Ecology and Assessment Program, applied the tag and reports unprecedented numbers of loggerheads in Southern California waters in recent years. He attributes their abundance to warm water temperatures off the coast. In 2011 his team counted zero loggerheads during aerial surveys conducted by NMFS. In the last year, they have counted over 300, which means there could be tens of thousands of loggerheads in ocean waters off the coast between Santa Barbara and Mexico.

Char Char is only the third loggerhead to be fitted with a satellite tag in Southern California. The other two, Coco and Matteo (released in April and July, respectively), can also be tracked on seaturtle.org. Seminoff expects the satellite tag to stay affixed to Char Char’s shell for up to a month or more. The data collected by the tag will help him and other researchers determine how long loggerhead sea turtles typically stay in the Southern California area, whether they swim with or against ocean currents, whether they stay inside or outside of the Channel Islands, and other questions. Typically, loggerheads live in the central North Pacific around the Hawaiian islands and their only nesting grounds are located in Japan.

Will Char Char still have a long and healthy life and good mobility while missing a front flipper? Seminoff reports that it is common for sea turtles, particularly around Australia where they are more prone to attacks from sharks, to survive and thrive with just one front flipper. While their swim stroke is slightly different, their migratory paths are indistinguishable from those of turtles with two front flippers. 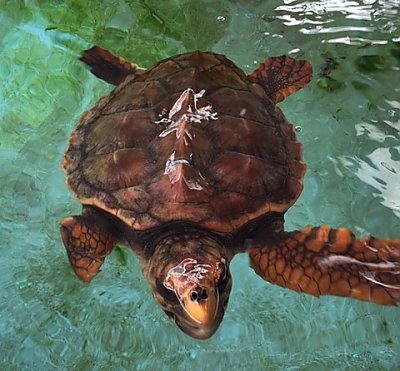 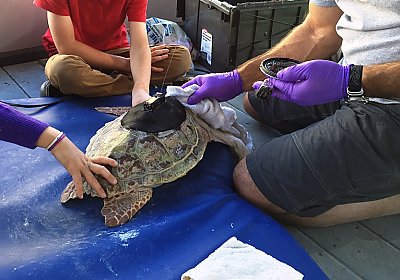 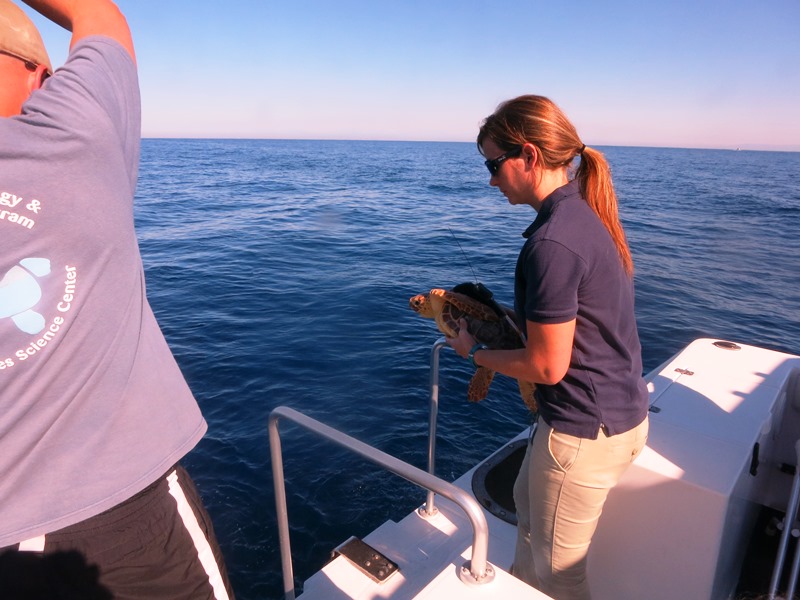 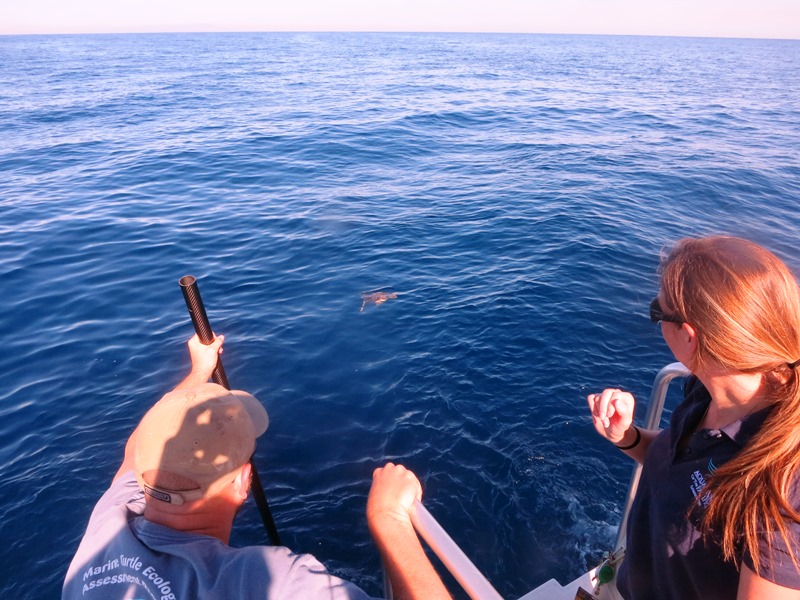 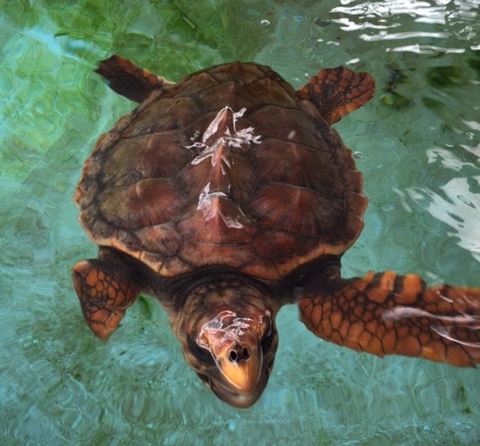 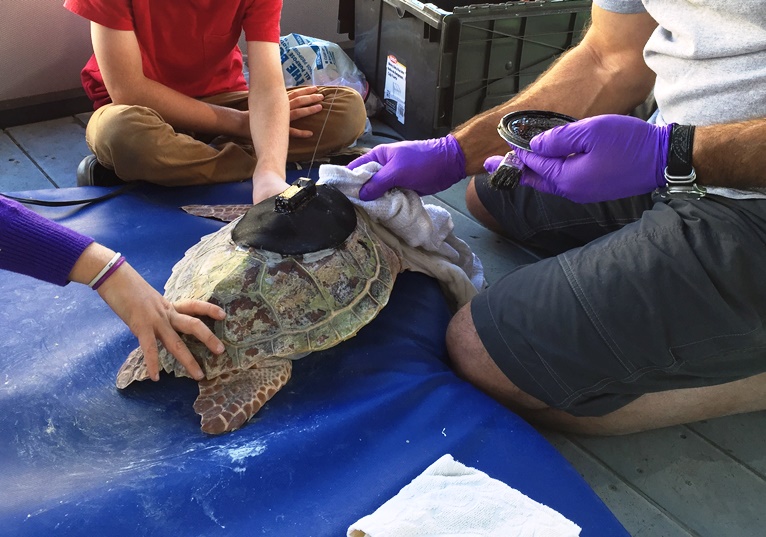 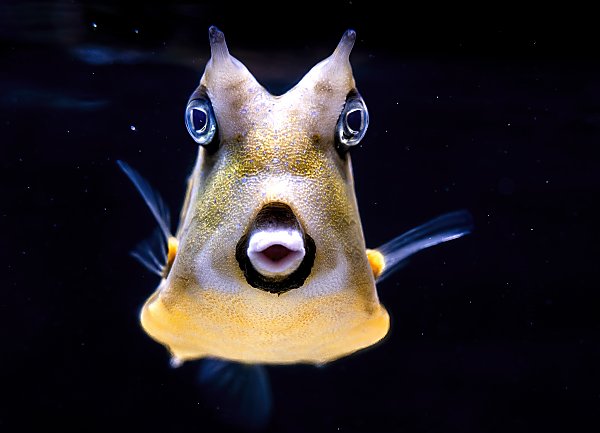