White abalone, an endangered species once abundant off the coast of California, is getting an opportunity to rebound. 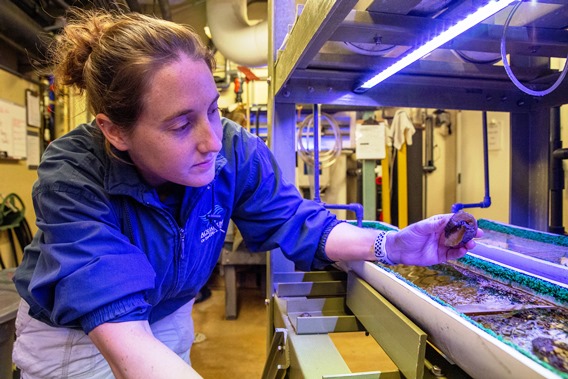 Aquarist Alex Lawlor examines a white abalone in the Aquarium's abalone culture lab behind the scenes.

The National Oceanic and Atmospheric Administration (NOAA) in collaboration with the Aquarium of the Pacific, the UC Davis Bodega Marine Laboratory, the Bay Foundation, Paua Marine Research Group (PMRG), the California Department of Fish and Wildlife, and various other partners have been working together to help save the white abalone from extinction. This is the first time in history that this federally protected species is being released into the wild.

The Aquarium is a founding partner of the White Abalone Recovery Program and has been working with NOAA for the past eleven years on this project. It is the only public aquarium involved in field activities and research on this species. White abalones reared at the UC Davis Bodega Marine Laboratory as part of this collaboration will be released into the wild in mid-November at undisclosed locations off Southern California. The release locations will be kept confidential among the project partners, allowing the white abalones to settle in the ocean. Scientific divers from the Aquarium of the Pacific along with divers from NOAA, CDFW, the Bay Foundation, and PMRG will release the white abalones from holding boxes, which were placed in their underwater locations at the end of October.

The Aquarium of the Pacific was one of a small number of facilities that received brood stock (adults that would become “parents”) to jump-start the breeding program under human care. The breeding program has produced thousands of offspring that are being prepared for eventual release. In addition to spawning white abalones in its lab, the Aquarium has assisted with additional research on this species and surveying local waters by its scientific divers to determine release sites.

White abalones were listed as endangered under the Endangered Species Act in 2001. Abalones are shellfish in the phylum Mollusca, which also includes clams, scallops, sea slugs, octopuses, and squid. Abalones have a single, flat-shaped shell and are part of the genus Haliotis, meaning “sea ear,” which refers to the shape of their shell.