The Aquarium of the Pacific has been assisting with recent efforts to rescue elegant tern chicks in the Long Beach Harbor. 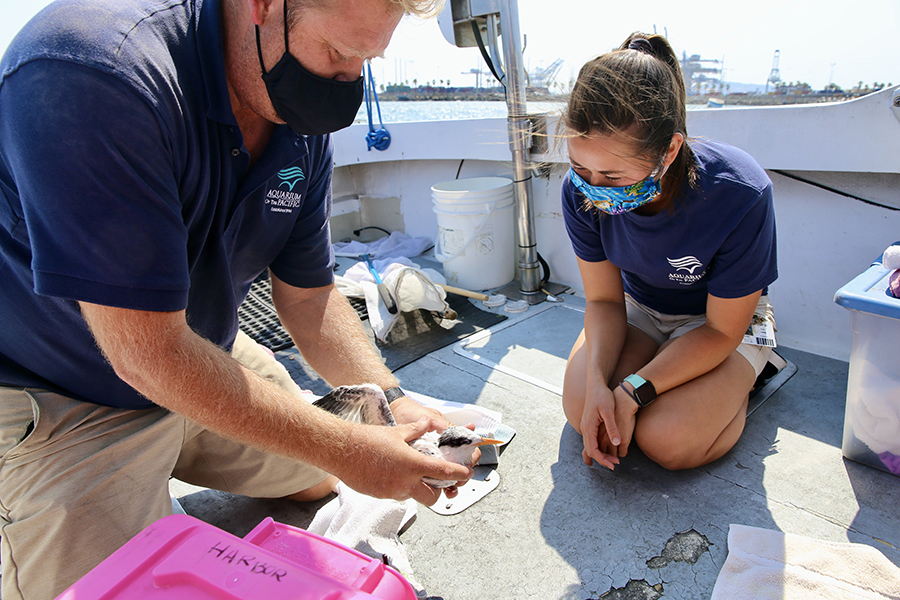 ​Updated 7/30/21–The Aquarium of the Pacific has been assisting with recent efforts to rescue elegant tern chicks in the Long Beach Harbor. The birds have formed a colony on two barges in the harbor, and unfortunately, chicks have been falling into the water. Because they have not fledged yet, meaning they have not grown their adult watertight feathers, the chicks will drown unless they are rescued.

Staff members from the Aquarium have been going out on their boat daily to retrieve chicks from the water. The chicks are then transported to the clinic at International Bird Rescue (IBR) in San Pedro, where they are stabilized and hand-fed. Organizations involved in this rescue effort now include the Aquarium of the Pacific, IBR, the Oiled Wildlife Care Network (OWCN), California Department of Fish and Wildlife, California Science Center, Heal the Bay Aquarium, and Los Cerritos Wetlands Stewards.

The Aquarium of the Pacific has contributed its boat and several of its animal care staff members, who are searching the waters in the vicinity of the colony throughout the day to help retrieve chicks from the water. The Aquarium of the Pacific and partners’ participation has allowed the staff at IBR and OWCN to focus on other mitigation efforts and rehabilitation at IBR’s clinic. As of July 30 more than 580 chicks had been rescued and brought to the clinic, and IBR estimates that about 2,000 birds have been saved thanks to the addition of floating platforms installed by the barges to help the birds get out of the water safely. Aquarium staff members report that they retrieved about thirty-five chicks each day.

The partner organizations involved in this effort are asking the public to contribute donations to help feed and house the chicks by visiting birdrescue.org. They are also asking people to keep their distance from these barges and reduce speeds when boating in the harbor.