What is a Sea Jelly?

Jellies and comb jellies have lived on Earth for at least 500 million years, making them three times as old as dinosaurs. Sea jellies survive without a heart, brain, or lungs. They are 95 percent water, and their movements are governed by the flow of the water they live in. 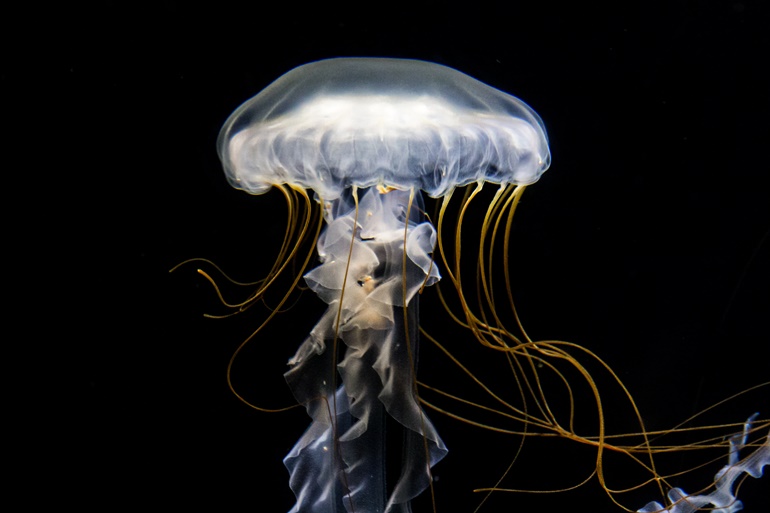 The ocean is home to many species of gelatinous animals, from sea jellies to comb jellies, as well as some tunicates, gastropods, and worms, which can all have translucent bodies similar to sea jellies.

Sea jellies are members of the phylum Cnidaria (pronounced nigh-DARE-ee-uh). Within this phylum is the class Scyphozoa, which includes the most familiar types of sea jellies, with bell-shaped bodies and tentacles or oral arms. This includes moon jellies, purple-striped jellies, Pacific sea nettles, and many other species. Other classes of sea jellies in the phylum include: Hydrozoa (small, usually transparent species like umbrella and crystal jellies; this class also includes the Portuguese Man-o-War, which is actually a colony of jellies in their medusa and polyp forms), Cubozoa (box jellies and sea wasps), and Staurozoa (stalked jellies that live attached to rocks and other surfaces).

Together, there are several thousand species of jellies in the Cnidarian branch of the animal family tree. At the Aquarium, jellyfish are referred to as sea jellies because technically they are not fish.

While they have similarly translucent bodies, live in the same waters, and eat the same kinds of food, the jellies described above are members of a different phylum from comb jellies, or ctenophores. There are at least 100 species in this phylum, Ctenophora (Greek for combbearers and pronounced teen-o-for-uh). Scientists at one time categorized sea jellies and ctenophores in the same phylum, but the differences between these groups have now been well characterized. The most notable is that instead of tentacles armed with stinging cells, comb jellies have sticky cells called colloblasts that do not sting and eight rows of cilia, or combs, that propel them through the water and produce a flickering rainbow-like appearance with their movements. Both jellies and comb jellies are on display at the Aquarium.

Jellies and comb jellies have lived on Earth for at least 500 million years, making them three times as old as dinosaurs. They are the earliest known animals to have organized tissues and to swim using muscles instead of drifting. These animals vary widely in size, from tiny medusae and comb jellies smaller than a pea to the lion’s mane jelly, which occasionally reaches 6 feet in width with tentacles up to 100 feet long.

As Cnidarians, jellies are related to corals and anemones. They all possess stinging cells called nematocysts, or cnidae. This word comes from the Greek word cnidos, meaning stinging nettle. In addition to nematocysts, Cnidarians have several other characteristics in common, including a similar method of capturing food and an oftentimes complex life cycle.

Sea jellies survive without a heart, brain, or lungs. They are 95 percent water, and their movements are governed by the flow of the water they live in. Although they contract their bells to propel themselves, jellies are planktonic animals, meaning that they drift with currents, being too weak to swim against them.

While they lack organs, Cnidarians have a net of sensory nerve cells, tentacles or oral arms, gonads that produce reproductive cells, and a gastrovascular cavity, where digestion takes place. The cavity opening is also used to expel waste and release reproductive cells.

Jellies have the simplest-known nervous system among multicellular animals. Nerves in the jelly’s external layer form a nerve net. The nerves generate pulses that contract the jelly’s bell, allowing it to swim. The nerves also detect changes in water chemistry and can sense touch. Jellies in the class Cubozoa even have complex eyes and can respond by swimming toward or away from the light and dark they see. The jelly’s circulation system is made up of canals filled with fluid that transports food and distributes nutrients.

Jellies use their stinging cells to capture food, which mostly consists of zooplankton and other sea jellies. These stinging cells are primarily located along feeding tentacles and sometimes on the bell itself. If the food gets stung by the nematocysts, those cells will hold onto and incapacitate the prey with venom. The tentacles then pull the food into the gastrovascular cavity where it is digested.