While sea jellies have the simplest anatomy of almost any animal, they have complex and varying lifecycles and reproduce both sexually and asexually. Different jelly species reproduce in different ways. 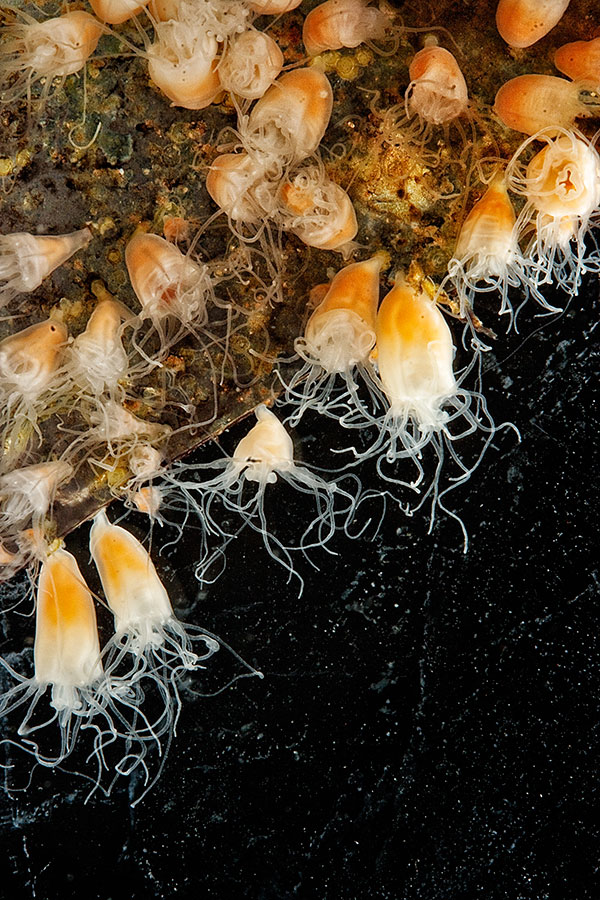 Most adult Scyphozoans release sperm, eggs, or both into the sea. Fertilized eggs develop into a planula, a flattened, free-swimming, larval-stage organism. The planula settles on a suitable surface, such as a rock, shell, dock, or piece of driftwood, and then develops into the polyp stage. A jelly in its polyp stage looks like a tiny sea anemone and feeds in the same way. With adequate food and space to develop, the polyp will divide asexually forming a stack. Suitable water conditions cause the polyps to pulsate and bud off the stacks. They become free-swimming ephyrae, the juvenile version of sea jellies. The ephyrae drift and eat, soon metamorphosing into the small stages of what is later the sexually mature adult or medusa.

Cubozoans reproduce sexually, with the male passing sperm to the female, who either hosts or releases fertilized eggs as they become larvae. The settled polyps can then reproduce asexually by budding. Hydrozoans and Staurozoans also have both sexual and asexual methods of reproduction.

A jelly bloom occurs when an abundance of nutrients and other conditions allows many jellies to reproduce at once. This often occurs when temperate waters are warmed by sunlight in the spring, leading to an abundance of phytoplankton, or tiny plants in the surface waters. These plants feed tiny animals called zooplankton, triggering an abundance of food for jellies, which provides them the excess energy to grow and reproduce.

Different species reproduce at different times of the year. Small species generally have short lifecycles ranging from as little as an hour or two to perhaps three to four months. Jellies can die because they are eaten by predators and other jellies; because they are damaged over time by rough waves, boat propellors, or bacteria; or because of lack of food.

Comb jellies have a much simpler reproductive process. Most are hermaphrodites, with individuals carrying both male and female sexual organs. After they grow to a certain size, they release eggs and sperm daily, which drift in the water for minutes to hours until they are able to fertilize and grow into new comb jellies. If conditions become unsuitable for reproduction, for example, due to a lack of food, comb jellies can refrain from releasing these reproductive cells and may shrink in body size until conditions improve.