Humans have found many uses for sea jellies, but human activity is changing ocean ecosystems, affecting jelly reproduction and habitats and potentially reducing their populations in the wild. Jellies are important for a healthy and balanced ecosystem. 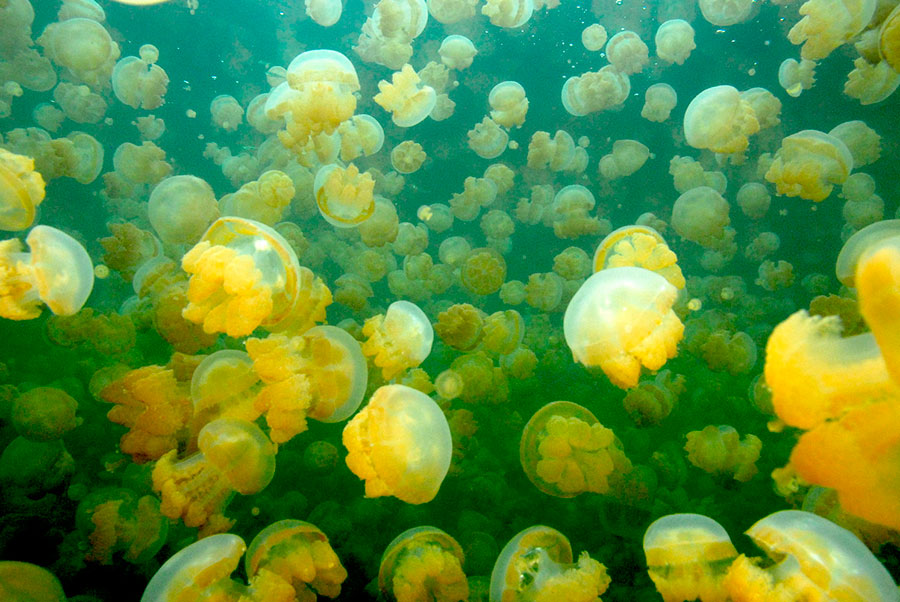 An abundance of jellies is seen by some scientists as a signal that an ocean ecosystem is out of balance. As humans have removed fish from the food web by overfishing certain species, there is less competition for the zooplankton jellies feed on, so their numbers may have grown. Another human activity that may lead to higher numbers of jellies is fertilizers entering the ocean through runoff. Fertilizers cause algae to bloom, which quickly depletes oxygen from the water, creating what are known as dead zones. Some jellies thrive in low-oxygen environments.

A changing climate and warming ocean are also likely to affect sea jellies. Those that thrive in warmer waters may increase in number, while those that live in cold-water habitats may diminish. Large jelly blooms can pose problems for ocean swimmers because of the danger of being stung by some species. They can also clog cooling water pumps at coastal power plants, causing regional power outages.

Pollution and trash in the ocean pose major threats to ocean life. For example, sea turtles and other animals sometimes mistake plastic bags for jellies. If these animals eat the plastic bags they find in the ocean, it can be extremely harmful to them, even deadly.

Assessing human impacts on jelly populations is difficult because of a lack of available data. Some species seem to have disappeared for several years at a time, but returned later. Some species of jellies were more abundant in San Francisco Bay at a time when waters there were more polluted. Conversely, while the waters around the San Juan Islands in the Pacific Northwest appear to be relatively pristine, jellies populations there have decreased over recent decades. The causes for these changes have yet to be confirmed. In order to best understand sea jellies, the changes to their populations, and our impacts, more research needs to be done.

What Can You Do?

The public can help track jellies as citizen scientists. At jellywatch.org, people can learn about the jellies they see along the coast while providing important scientific data. Jelly blooms are not currently tracked in any permanent record. Citizens can help scientists by reporting their observations.