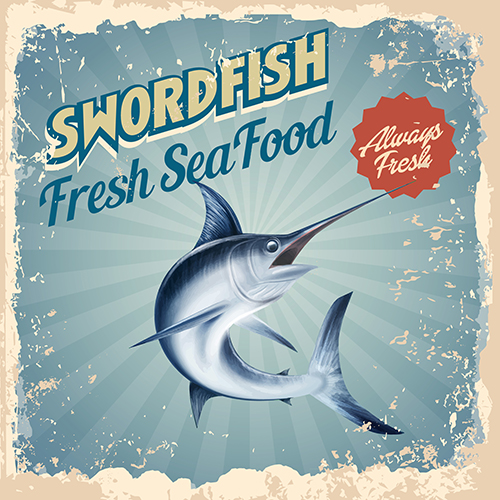 Peak season for local swordfish is September through January. Swordfish meat is firm, with a moderately high oil content, and is moist and slightly sweet. When raw, the color varies from white and ivory to pink and orange. When cooked, swordfish meat turns beige.

Swordfish is a high source of selenium, niacin, vitamin B12, and a moderate source of zinc. It may contain amounts of methylmercury that may be above the Food and Drug Administration’s recommended limits for women who may become pregnant, are pregnant, nursing mothers, and young children. Mercury is a natural element found in seafood. Concern over mercury in seafood has been the subject of much research and discussion.

While all seafood has small amounts of mercury, researchers have found that the benefits of eating seafood outweigh the risks. Visit Seafoodhealthfacts.org for more information.

A case study of the closure and subsequent re-opening of the Hawaiian longline fishery (Chan & Pan 2016) assessed the impact of these actions on protected species. The fishery re-opened in in 2004 with mandatory use of circle hooks, mackerel-type bait instead of squid (a sea turtle favorite), 100 percent observer coverage, and set annual limits (hard caps) per species on the number of bycatch interactions allowable for the fishery. These requirements were designed to reduce bycatch and bring the fishery into compliance with the Endangered Species and Marine Mammal Protection Acts.

With these regulatory changes in place, the fishery reduced the bycatch of loggerhead sea turtles by 90 percent and leatherback sea turtles by 83 percent. The changes also resulted in a 50 percent reduction in swordfish catch. The study found that, if the Hawaiian longline fleet had continued to supply their peak level of swordfish landings (pre-closure), instead of allowing other countries to fill the production gap, there would be 260 fewer sea turtle bycatch per year, globally.

Trade tracking programs monitor the international trade of swordfish and require that imported swordfish products come with details documenting when, where, and with which gear the fish were caught to provide U.S. consumers with information about the seafood they purchase.

As of 2016, NOAA Fisheries also established the Marine Mammal Protection Act Import Provision Rule, which aims to reduce marine mammal bycatch associated with imported seafood products. NOAA Fisheries has established criteria for evaluating a nation’s regulatory program for reducing marine mammal bycatch and proceedures for importing seafood products into the U.S. Any harvesting nation that imports seafood into the U.S. must apply for and receive a finding that their export products meet the same standards to protect marine mammals as U.S. commercial fishing operations in order to continue to export product into the U.S. by 2022. 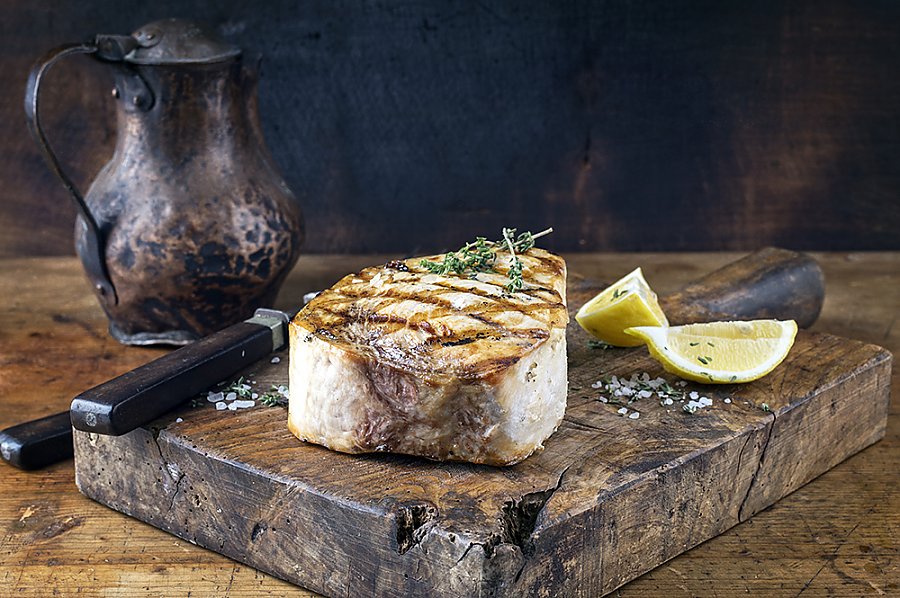 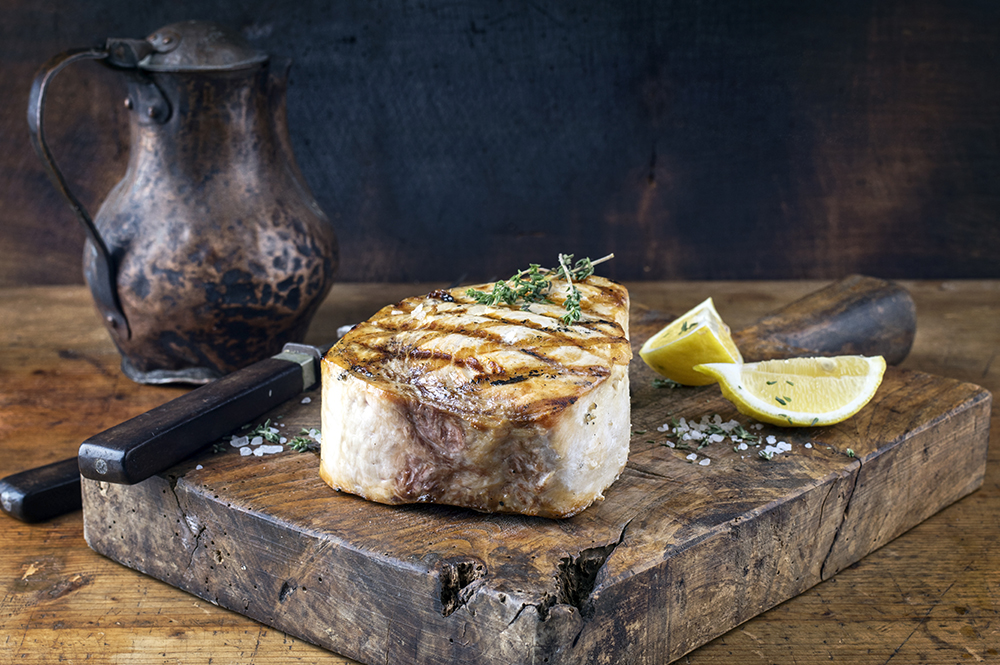 Swordfish is a popular seafood choice!

Americans like swordfish. Consumption of swordfish in the U.S. has hovered between 33 million pounds and 55 million pounds since 2004. Imported sources provide the majority of the swordfish Americans consume, about 80 percent by weight (Helvey et al 2017). Ecuador provides the largest share of swordfish by weight to the U.S. market, accounting for more than 50 percent of the total (NOAA Fisheries Statistics and Economics Division). 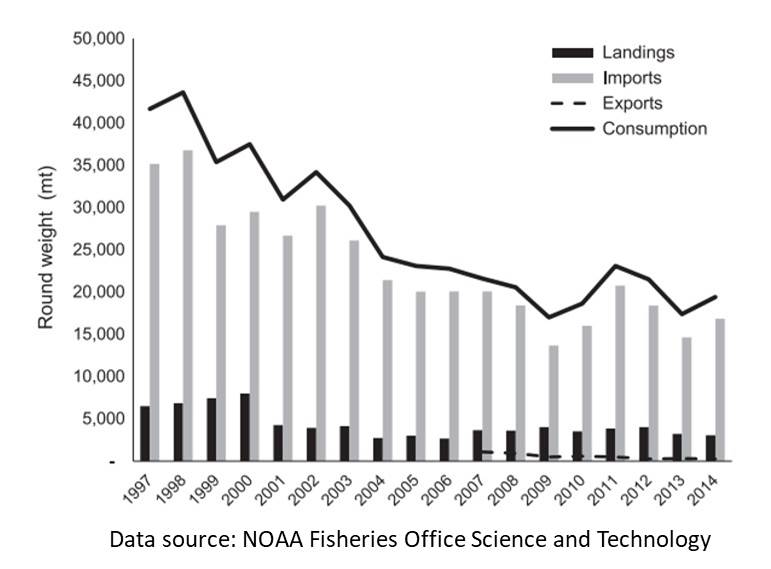 California swordfish is available at restaurants and retailers throughout Southern California, primarily during peak season (September - January). Most of the swordfish caught in California stays in the state. 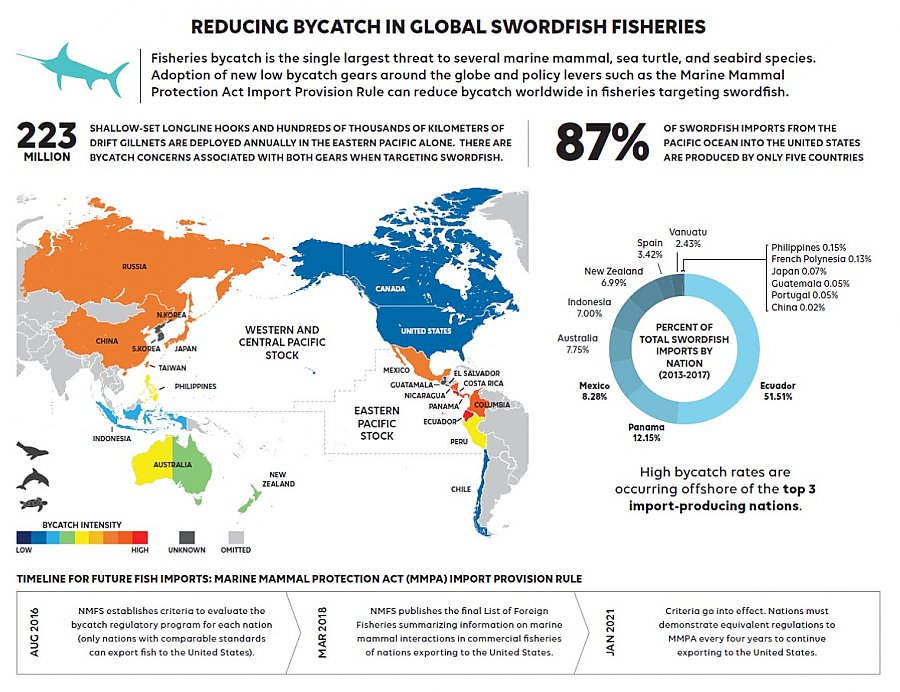 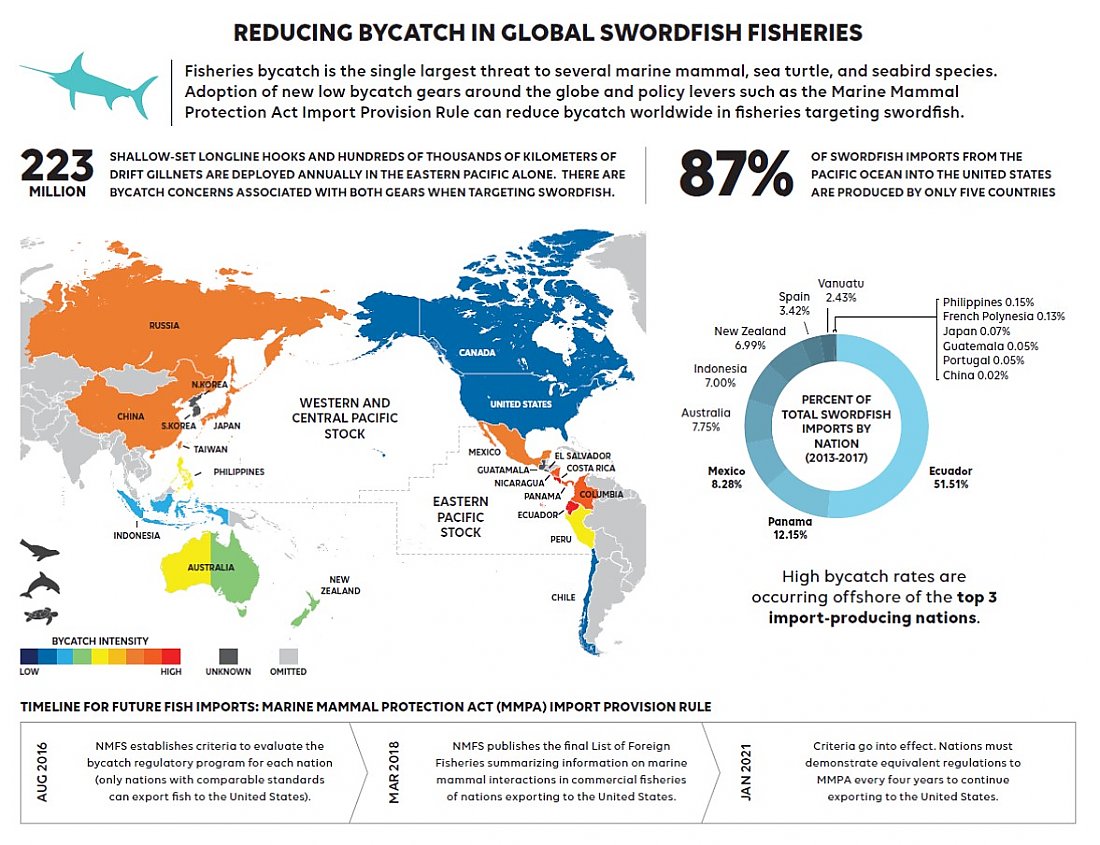 The U.S. has strict regulations to control the levels of bycatch allowed by domestic fishermen. These restrictions, along with other factors, have reduced the volume of swordfish U.S. fishermen supply to the domestic seafood market since peak landings in the 1980s. When U.S. fishing activity is restricted to reduce bycatch, the demand for the product does not go away. Instead, consumers rely more on imports to meet the demand. However, fishermen in many countries are subject to less stringent regulations and bycatch restrictions than U.S. fishermen.

Studies have shown that this shift in supply from well-managed U.S. fisheries to foreign fisheries that may or may not adhere to similar bycatch restrictions can actually increase bycatch globally. This process is called a ‘transfer effect.’ The concept of transfer effects is not new. It has been studied in the context of agriculture and timber for years.

On California’s side of the Pacific, a 2017 study assessed, among other things, the impacts of the time-area closure of the Pacific Leatherback Conservation Area (Helvey et al 2017). They found that the closure area resulted in increased imports of swordfish from other Pacific nations and estimated that it increased the level of bycatch in foreign fisheries by 1,457 endangered turtles over the 2001-2010 period, compared to the 45 turtles that were modeled to have been affected if the area remained open to fishermen operating under stringent U.S. regulations.

Workshop Report - Transfer Effect Research: Understanding True Conservation Costs and Benefits in a Globalized Economy
Participants at a 2016 workshop hosted by Environmental Defense Fund and the Bren School of Environmental Science and Management agreed that there is value in U.S. fishery/seafood policy leaders considering transfer effects as a potential outcome of conservation policies involving species that are internationally managed. They also agreed that stronger international and cross-sector collaboration and additional research is needed to better understand transfer effects and how they can impact conservation in a globalized economy. 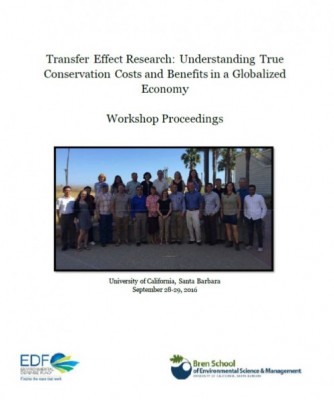