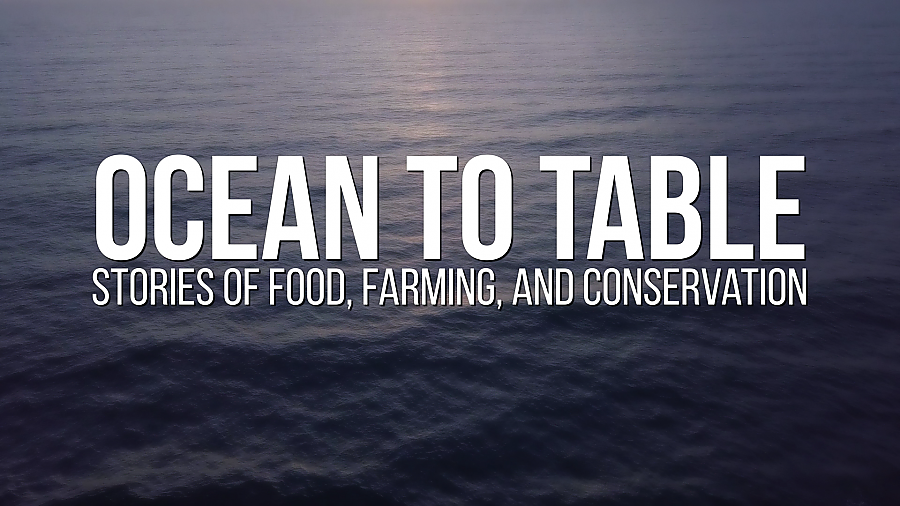 NOTE: Views shared by the people featured in the series regarding a specific product are theirs and not an endorsement by the Aquarium of the Pacific, Seafood for the Future, or USC Sea Grant.

In this episode we travel to Tomales Bay in California to meet farmers Terry Sawyer and John Finger at Hog Island Oyster Company. They are joined by Chef Stuart Brioza from State Bird Provisions & The Progress, and scientists Sarah Lummis from UC Santa Cruz and Sarah Newkirk from The Nature Conservancy to talk about their collaborative efforts to research the relationship between eelgrass and oyster farms. Brioza, Sawyer, and John also share a simple recipe for grilled oysters.

In this segment, we travel to the Big Island of Hawaii to explore the only offshore fish farm in the U.S.—Blue Ocean Mariculture. Farmer Tyler joins James and Colin talk about aquaculture’s role in Hawaiian culture and marine finfish farming’s role in conservation. Tyler also shares his favorite kanpachi poke recipe.

In this segment, we are joined by Briana Warner from Ocean Approved at Island Creek Oyster: The Shop in Portland, Maine. She is joined by Sebastian and Barton to discuss the important role that responsibly farmed seafood can play in local communities. Bri also shares a recipe for her favorite seaweed smoothie.

In this segment, we travel to Lady’s Island Oyster Inc in South Carolina. Frank and Julie are joined by their good friend, Chef John Marshall to talk about farming oysters to meet specific culinary tastes and why it can be good for the environment. They also share tips for shucking oysters.

In this segment, Chef Barton Seaver joins farmer Matt Moretti and Halley Froehlich to talk about the community and social elements of marine aquaculture and its role in local economies. Seaver and Froehlich also share some pro tips to buy and prepare mussels for a quick meal for cooking novices and pros.