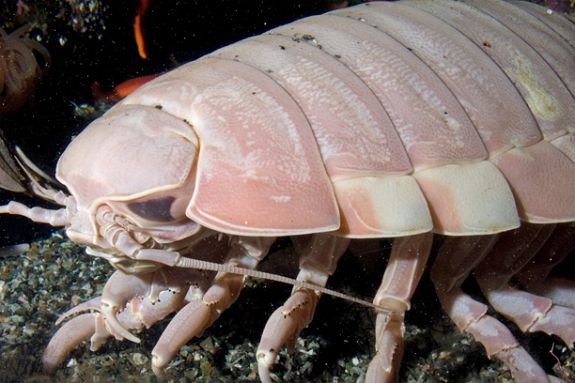 One of our giant isopods in its benthic habitat. | Perry Hampton, Aquarium of Pacific 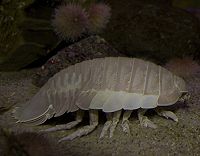 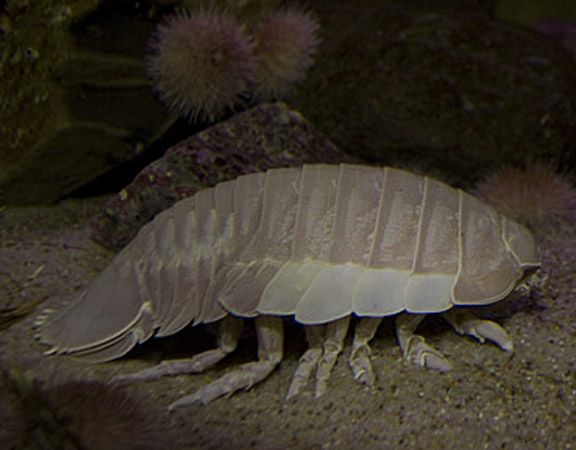 The gigantism of the giant isopod is believed to be an adaptation to for living under the extreme pressure of the deep sea.

Alice Hsieh, Aquarium of the Pacific

Found in most regions of the World Ocean.

Giant isopods are invertebrates with dorso-ventrally compressed bodies that are protected by thick and strong calcareous exoskeletons composed of overlapping segments. The first shell segment is fused to the head and most posterior segments are often fused to their body, forming a caudal shield over the abdomen. The top of the first shell segment protrudes out over the isopod’s large, fixed eyes. These compound eyes are spaced far apart and have over 4,000 individual facets. Light bounces off a reflective layer at the back of the eyes called the tapetum, making the eyes appear to glow.

The giant isopod has seven pairs of pereopods (legs) that have a single branch. The first pair of pereopods is modified to help move food to the isopod’s four sets of jaws. The complex mouths are modified for cutting and tearing the giant isopod’s prey. They have two pairs of antennae, one small and one large, located at the front of its body. The abdomen has five segments called pleonites, each with two branches. These are modified into legs adapted for swimming (natatory legs) and rami, flat respiratory structures acting as gills.

Giant isopods are brown or pale lilac in color.

Giant isopods are carnivores. It is widely believed that they are scavengers; however, there is some evidence that they are also facultative predators, feeding on both live and dead animals. They are known to feed on fish, crab, shrimp, squid, sponges, and whale carcasses that fall to the seafloor as a whale falls. They are also known to attack trawl catches.

These isopods can go for long periods of time without eating. They have been known to survive for four years without food when kept in a protected environment such as an aquarium. When a significant source of food is encountered, giant isopods gorge themselves to the point of compromising their locomotive ability. It is suggested that to find prey, they rely mainly on chemoreception and possibly mechanoreception, a sensory receptor that responds to mechanical pressure or distortion.

Analysis of the stomach contents of three specimens collected north of the Yucatan Peninsula in the southern Gulf of Mexico uncovered large quantities of plastic.

It is believed that the reproductive cycle of giant isopods peaks in the spring and winter months because food is more available then it is in the summer. Giant isopods reproduce by laying eggs. The females develop a pouch above her stomach and internal organs known as a marsupium where 20 to 30 eggs are stored until hatched. These eggs, up to 13 mm (0.51 in) in diameter, are thought to be the largest eggs of all the marine invertebrates. Females do not feed when brooding, they seem to bury themselves in the sediment to reduce energy expenditure during brooding, and insulate and protect the egg from predators. The hatchlings are fully formed miniatures of the adults. They are up to 6 cm (3.4 in) in length and almost fully developed, lacking only the last pair of pereopods. At this stage, they are known as manca.

Like the pillbugs when threatened, giant isopods have the ability to curl up into a ball so that only the tough exterior shell is exposed and the sensitive interior is protected. While giant isopods spend most of their time on the deep seafloor scavenging for food, they are free-swimming and capable of gliding through the water. Given that some have been found at 170 meters (550 feet), it is possible that they may exhibit vertical migration.

They burrow into the sediment for shelter and are always in a state of semi-hibernation. Since they do not know when they will be able to eat next, they limit their expenditure of the energy needed for movement and breathing.

Giant isopods have developed large antennae that they use to find their way and prey as they crawl along the dark seafloor. They are an example of deep sea gigantism, the ability of deep sea creatures to grow much larger than their relatives in shallow waters. Scientists do not know why this occurs, but some believe gigantism may help a deep ocean organism withstand the extreme pressure under which it lives. Others suggest gigantism is a result of adaptations to scarce food resources in the deep ocean, delaying sexual maturity and resulting in greater size. It has also been suggested that to be due to Bergmann’s rule, which states that populations and species of larger size are found in colder environments, and species of smaller size are found in warmer regions. Decreasing temperature is thought to result in increased cell size and increased life span, both of which lead to an increase in maximum body size.

Studies have found that giant isopods from different locations around the world were almost identical, indicating a lack of evolution. This has been attributed to the extremely low light levels of their habitat.

From the fossil record, it is thought that giant isopods existed more than 160 million years ago, before the break-up of the supercontinent Pangaea.

A giant isopod at the Toba Aquarium in Japan was fed a horse mackerel in January of 2009. While it pokes and rubs its face in food it has been offered, as if it is pretending to eat, it has not eaten since 2009. Nonetheless, its health does not appear to have suffered from the lack of food.

The gigantism of the giant isopod may be an adaptation to the extreme pressure of the deep ocean they inhabit.

Giant isopods are one of the largest crustaceans and the largest known member of the isopod family, a group of crustaceans that are closely related to shrimp and crabs. The giant isopod is also related to terrestrial crustaceans, such as Armadillidium vulgare, commonly known as the pillbug or roly-poly. The enormous size of giant isopods is a result of a phenomenon known as deep sea gigantism or abyssal gigantism, the tendency of deep sea animals to grow to a much larger size than similar species in shallower waters.