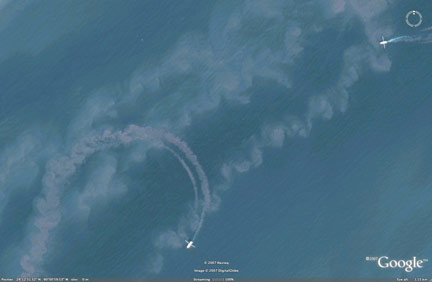 Two trawlers and their suspended solids plumes near the Mississippi River. Google Earth™

Pollution in the marine environment is a complex subject and can be viewed several different ways. It can be viewed as pollution types or classes, specific pollutants or from the source-and-fate viewpoint.

In this site, we will view the problem from the source-and-fate viewpoint. This viewpoint often ends up with a variety of types of pollution with different fates and behaviors being lumped into one area. For example, river runoff in Southern California is associated with high levels of solid waste, ranging from non-degradable plastics to microscopic bacterial contaminations which are then combined with soluble nutrient and pesticide runoff.

For an overview of all the pollutants going into the Southern California Bight, consult the research reports from SCCWRP (Southern California Coastal Water Research Project). This organization has been conducting high level research on all the sources of pollution and their impacts for many decades.

This source of pollution is the one that citizens have the most direct control over. At the present time, there are few pollution control devices between the street in front of your house and the ocean. When it rains, all the litter, dirt, waste, excess nutrients, pesticides, oils and animal fecal material, etc. that are in your yard or street will end up in the ocean. Infrequent rain in Southern California means these pollutants will accumulate on land until that big rain event when it heads towards the ocean. The pollutant concentrations in the initial storm water are very high.

Detailed analysis of the composition of storm water can by found in many scientific journal references, but these usually require a subscription. A public study can be found at the SCCWRP website.

Floating materials, like plastic or wood litter, will often be blown back onto the beach after the storm. In most of our beach areas, this material is picked up by the beach cleanup crews. In other areas various volunteer efforts in litter cleanup accomplish the task.

Sinking materials, such as sand, dense plastics, and dirt, will flow out the discharges (often river mouths) with the fresh storm waters forming surface plumes that can extend many km up and down the coast. The fast sinking material will fall to the bottom, while the mixture of slow sinking dirt, clays, animal fecal material and a mix of chemicals attached to small particles will stay in suspension. The high volume of fresh water entering the higher density seawater will tend to make a lower density layer on the surface, which contains all the dirt, fecal materials and turbidity entering with the runoff. This surface layer of highly polluted and turbid waters can often be seen from shore after storms and near the discharge points. These contaminated waters can exceed the health limits for bacterial contamination with fecal materials. Eventually these waters get mixed into the bulk of the ocean and the suspended solids creating the turbidity will sink to the bottom.

Research is being conducted on methods of controlling or treating these storm discharges. The best initial solution is to minimize the amounts of pollutants in the initial runoff by anti-litter activities, street sweeping and yard maintenance to prevent runoff to the street.

The impacts of sewerage on the ocean depends upon where the discharge is located, the local and regional hydrology, the degree of treatment of the sewerage, the local ecology, and the volume. The pollutants from sewerage are generally measured as settleable solids, suspended solids, BOD (biochemical oxygen demand), COD (Chemical Oxygen demand), TAN (total ammonia nitrogen), Phosphate and the bacterial/viral concentrations. Each of these parameters has different impacts under different conditions.

In Southern California, we are lucky to have deep water close to shore and have very high volume currents moving through the area. All the treatment systems along this coast remove the fast settling solids for land disposal prior to discharge, which eliminates this factor as a potential impact. The discharge depth is usually great enough for the discharge plume to become totally mixed in the deeper water column and not reach the surface. This results in eliminating the impact associated with bacteria in the discharge contacting swimmers at the beach. Most bacterial issues in in Southern California are traceable to river discharges (including broken pipes discharging into rivers or creeks) or animal waste including seabirds, seals, etc.

One problem with sewerage discharges around the world is related to the oxygen demand as measured by BOD on the oxygen levels of the receiving waters. Again, in our Southern California basin, our large currents provide adequate oxygen and eliminate this potential impact. Hard coral species have been shown to be impacted by BOD components even when oxygen is not an issue, but this area doesn’t have that type of ecology.

Another issue is nutrient discharges in the form of phosphate and TAN and their contribution to eutrophication. With the large currents in the local area, the amount of nutrients naturally in these currents is so large that even our high population doesn’t make a significant change. The same amount of nutrients discharged into a shallow basin with poor circulation would have major problem with overgrowth of algae.

In the past, we have had major discharges of persistent organic pollutants (POP) such as DDT from the Palos Verdes discharge. The EPA website provides a starting link on this topic. This material does not degrade in a reasonable time scale and is still contaminating our local ecology. The discharge was stopped decades ago, but there are still warnings about eating white croaker from the Palos Verdes area. The present discharges of POP’s and other chemicals of concern from sewerage discharges are significantly reduced.

With our offshore oil rigs and extensity of oil tanker traffic, oil spills are an obvious concern in Southern California.

The best solution to the oil spill problem is prevention. However, once a significant spill occurs, true cleanup is very difficult. In general, only a small percentage of any major spill can be recovered. Nature’s bacterial decomposition of the oil is usually the main cleanup agent, however this takes time. In the mean time, birds, mammals with fur insulation, surf zone animals, air breathing animals and others that interact with the surface or bottom are at great risk.

With all our natural and anthropogenic oil seeps in the area, nature already has a wide variety of oil decomposing bacteria in our waters. One would expect these bacterial populations to respond faster that would be the case in areas without continual small inputs to maintain seed cultures.

With the expansion of the mandatory use of ethanol in gasoline, the volume is increasing to the point where shipment by tanker and barge will become common. This means that the risk of a major spill is non-zero. Ethanol has a very low toxicity and large quantities of ethanol entering the water will not have any immediate impact. However, ethanol is highly biodegradable and the bacteria that will eat ethanol will use the oxygen from the water. If even a relative small spill (less than 1000 gal) of ethanol occurs in a slow mixing water basin such as a harbor, the resulting bacterial bloom can use up all the oxygen and kill every non air breathing organism in the area.

At the time the California Legislature required replacing MTBE as a fuel oxygenate with ethanol, a health/environmental study was conducted by Lawrence Livermore Laboratories. These studies did not include the risk of low oxygen from biodegradation of ethanol. (http://www-erd.llnl.gov/ethanol/etohdoc/index.html#vol4 and http://www-erd.llnl.gov/ethanol) Their models of the fate of ethanol from bulk spills did include biodegradation to account for the destruction of the ethanol but left out the fact that this degradation will use oxygen from the water.

With the lower water velocities in harbors, estuaries, river mouths and sheltered marine areas, there is a natural buildup of sediments. For navigation and other reasons, it is sometimes necessary to remove these deposits. If the sediments are just clean sand, they have been deposited onto beaches as sand. However, there is usually some clay and dirt in most deposits and these can create muddy water near the beach where the material is being deposited. As these are periodic events, these turbid waters only have an impact for a short time.

Harbor dredging usually has sediments that are not clean sand and are transported by barge to specific dredge disposal sites. This sites have been well studied. With the point source discharge of these sediments, you end up with a suspended solids plume produced from the fine components and organic components of the sediments being dredged. This plume will disperse from the disposal side by dilution with clean water and settling. Being a point source, this dispersion will depend upon the square or high power of the distance. This means that at any significant distances, the plume will become non-detectable.

Bottom trawling is a fishing method that consists of dragging a very wide net on the sea bottom to catch fish (flatfish like halibut in California), shrimp (pink shrimp fishery in California), sea cucumbers, scallops, mussels and specialized dredges for clams.

The nets often use “doors” or large plates of steel to hold the net open on the bottom using the hydraulic forces from the forward movement of the boat. There is a chain/cable that goes between the doors just ahead of or as the part of the net, whose purpose is to get the target animals into the water column and the net. It is this chain/cable that is in contact with the bottom and cuts a few cm into the bottom.

The doors cut groves into the bottom that can be seen for decades and in the process stir up sediments into the water column. The chains/cables and nets themselves also put more suspended solids into the water column. In areas without strong thermoclines or other denisity layers, this suspended solids pollution can reach the surface and become visible from space. Using Google Earth™ software to fly along the Gulf areas, one can find some high resolution areas where trawlers are visible.

The amount of suspended solids put into the water column by one trawler per hour is much grater than all the rivers, sewerage plants, industrial discharges and dredge disposal in Southern California combined.

The suspended solids from bottom trawlers can drift many miles with the currents and impact light levels on the bottom. This can be relevant for kelp along the California coast. It won’t impact adult plants, but young plants just getting started may be impacted. This can impact recovery of kelp beds.

This area of suspended solids pollution from trawlers is being actively investigated by United Anglers of Southern California. A detailed white paper on the subject will be available in 2008.