Climate Change and the Ocean

How Will the Ocean Respond to Warming? 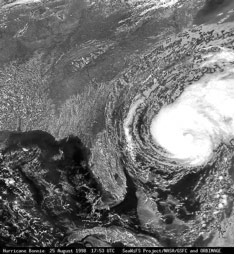 Fig. 1. Tropical storms are powered by the heat of surface waters of the sea. Thus, warming increases risks concerning occurrence and power of such storms. (Shown: NASA image of Hurricane Bonnie east of South Carolina, August 1998.)

Our planet has life because of greenhouse gases in the air. They keep Earth warm, so that water can flow and clouds can form to bring rain. Without these gases, most of the planet would be covered with thick masses of ice and the air would be dry.

The two most important greenhouse gases are water vapor and carbon dioxide. Molecules of these gases intercept heat radiation that attempts to leave the planet. As a result, the planet’s radiation balance is achieved several kilometers up in the atmosphere, and the ground and lower atmosphere, where we live, are pleasantly warm and suitable for growing things.

Within the last several decades, where we live has been getting warmer. Greenhouse gases have considerably increased since the industrial revolution. Each year, the burning of fossil fuels produces additional carbon dioxide – roughly one percent of what is in the air already. The ocean takes up a large portion of it, but nevertheless the atmospheric content of this gas increases by almost 0.5% annually. Methane, another greenhouse gas, also has been increasing substantially. In response to these changes, Earth is warming. Countervailing effects – heat uptake by the ocean, shading by effects from air pollution – are slowing the process somewhat, but warming continues.

The physical interactions between the various elements of the climate system are very complex, and therefore projections of future warming effects are subject to considerable uncertainty – things could change more, or they could change less than indicated by the best guesses offered by experts. The uncertainties (but not the fact that man-made greenhouse gases produce warming) are the subject of much research and discussion among active geophysicists.

One would like to know how the ocean will respond to warming. Since the ongoing warming is greater in high northern latitudes than in low latitudes, temperature gradients in the northern hemisphere will decrease, zonal winds will decrease correspondingly, and mixing and upwelling will decrease as a result. Productivity will drop. What will happen in the south is less clear: enormous ice masses on Antarctica are resistant to removal, which stabilizes the existing situation. In any case, sealevel will continue to rise globally, and the rise might well accelerate to rates considerably higher than those of the 20th century. On the whole, the weather will become less predictable. In addition, with continued warming from burning coal and petroleum, the risk of unanticipated and troublesome events will keep increasing: a warm sea surface feeds energy to tropical storms (Fig. 1).

W.H. Berger, Ocean – Reflections on a Century of Exploration. University of California Press, Berkeley (in the press).