The Pike at Queensway Bay

In 1992, the Disney Corporation decided not to bring the DisneySea theme park and development to the Long Beach urban waterfront. As a result, the City of Long Beach took it upon itself to make a plan to develop its under-utilized downtown shoreline.

The City hired the internationally known architectural firm, Ehrenkrantz & Eckstut, to prepare a master plan. The plan had three components: Rainbow Harbor, the Aquarium of the Pacific, and the Pike at Queensway Bay. With a $40 million loan from the Economic Development Administration of the federal government, Rainbow Harbor was dredged and a wonderful esplanade and docks created. The Board of Directors of the Aquarium of the Pacific sold $120 million in revenue bonds and partnered with Kajima Urban Development to open the Aquarium in 1998. The Pike at Queensway Bay has been the most difficult component to successfully complete. 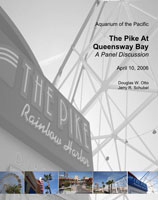