In the past several years a number of reports about the ocean and its problems and surveys on environmental literacy have pointed out that while people love the ocean, many neither know much about it nor believe that their actions affect its health.

The U.S. Commission on Ocean Policy (USCOP) and the Pew Oceans Commission reports state a need to broaden ocean education and awareness at all levels of society from pre-schoolers to senior citizens so that, whether they live on the coast or in middle America, all will understand the impact the ocean has on them and the impact they have on the ocean. The goal—an “ocean literate” public. Ocean literacy is defined by the National Science Foundation’s Centers for Ocean Sciences Education Excellence (COSEE) and the National Marine Educators Association (NMEA) as “understanding the ocean’s influence on you and your influence on the ocean”. What ocean science does the public need to know and understand and what are the best strategies and methods for turning the science into messages and stories that make it not only memorable and understandable to the audience, but also result in stewardship of the ocean? 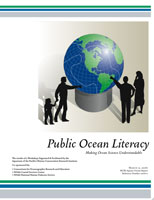