Marine Finfish Aquaculture in the U.S. and California

A Story of Lost Opportunities for Leadership and Economic Development

The document is an essay adaptation of a presentation given by Jerry R. Schubel at the World Ocean Council’s Sustainable Ocean Summit in Rotterdam, Netherlands on December 2, 2016.

A United Nations (UN) study indicated the U.S. has the greatest potential to expand offshore aqua- culture production, primarily because it has the largest Exclusive Economic Zone (EEZ) of all nations. The current status of marine aquaculture in the U.S. tells a different story. More than 90 percent of all seafood consumed in the U.S. is imported, mostly from Asia, resulting in an annual seafood trade deficit exceeding $14 billion. In 2014 the U.S. contributed just under 0.5 percent to the global farmed seafood supply. California ranks high among U.S. states, with the greatest potential and the greatest resistance to developing an aquaculture industry. It has the oceanographic conditions, the markets, and the scientific expertise. But it also has some of the strongest opposition from a misinformed public and a permitting process that discourages innovation and investment. Progress at the federal level is little better. Until the U.S. designates a lead federal agency for the permitting process, progress will be slow. 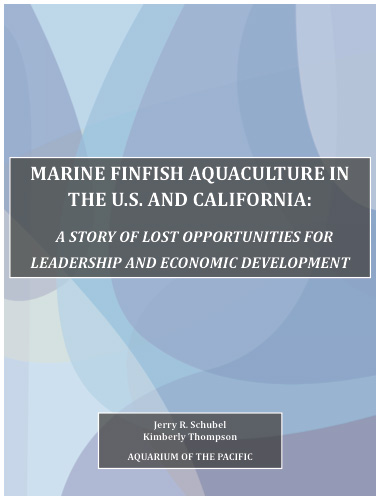 Marine Finfish Aquaculture in the U.S. and California (pdf)