Forum Report: Sato-Umi in the Anthropocene

On November 13-14, 2017, the Aquarium of the Pacific and the Honda Marine Science Foundation convened and facilitated a forum on “Sato-umi in the Anthropocene.” The forum was designed to explore a number of approaches to “integrated” coastal management, in particular those that cross the land-sea boundary, some of which have been practiced for thousands of years, to see if lessons could be extracted to elevate awareness and stimulate action to reduce vulnerability in the “new normal” of rising sea level. Sato-umi is one of these approaches. It has been used in Japan for thousands of years and is deeply rooted in the Japanese culture. It is a philosophy and a concept that recognizes the intimate conceptual and practical connections between land and sea. Ahupua’a is a similar approach that was used in Hawaii for thousands of years, generally before European contact and control. It, too, is deeply rooted in culture and was used to guide coastal development there to protect living resources and to benefit society. Both Sato-umi and Ahupua’a focus on the land-sea connection.

The theme of the Forum was proposed by Mr. Takuji Yamada, former President of Honda North America, and brought together experts from Japan and throughout the U.S. to explore the applicability of the concepts and philosophies of Sato-umi, Ahupua’a, and more generally Integrated Coastal Management to assess the roles
these concepts might play in achieving and sustaining a better balance between human uses and ecosystem integrity both throughout watersheds and in the contiguous water bodies in the Anthropocene.

In this report we present brief case studies of coastal systems where Sato-umi, Ahupua’a and Integrated Coastal Management have been applied successfully and search for the conditions and strategies that were essential to their success. We also identify examples of coastal systems ripe for application of the whole watershed
management embodied by these three principles, as well as examples where these principles could have been implemented, but were not, resulting in environmental damage to coastal resources. We present a variety of tools developed by NOAA and others for use in Integrated Coastal Management, explore what has limited their
application, and offer recommendations. 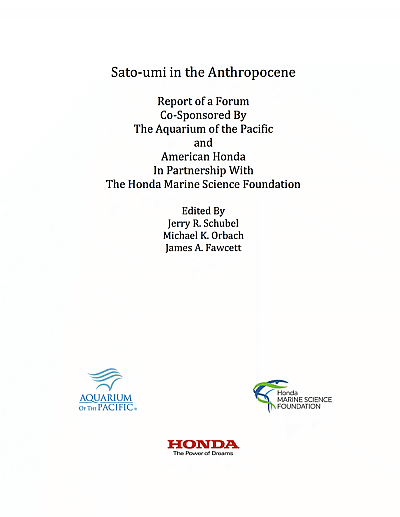