When we think of penguins, we often picture ice and snow. But only a few species of penguins live in Antarctica and withstand that continent’s coldest temperatures. Most penguins in the world—ten out of seventeen species—live in temperate areas and never see ice or snow. 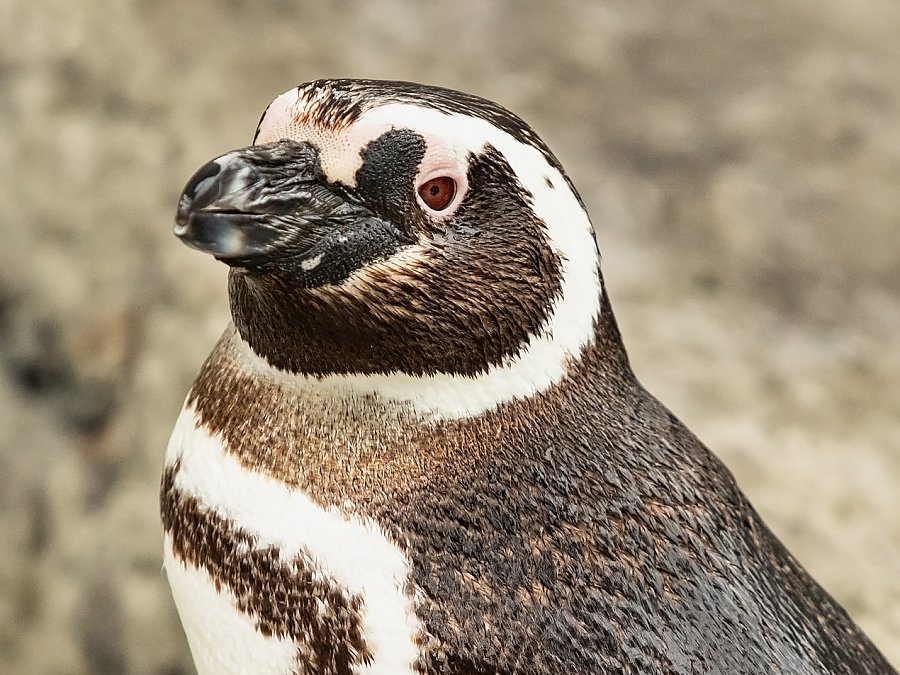 Penguins have existed on Earth for more than 50 million years, and over that time they have adapted to living in many regions of the Southern Hemisphere. They live along the coasts of South America, Africa, Australia, New Zealand, and Antarctica as well as on surrounding islands, including the Galápagos off the coast of Ecuador, where the northernmost penguins live.

Magellanic Penguins were named after the Portuguese explorer Ferdinand Magellan, who was the first to sail from the Atlantic Ocean to the Pacific Ocean in the mid-1500s through what is now called the Strait of Magellan. A temperate species, Magellanic Penguins are usually about two to two-and-a-half feet tall and weigh between six and fifteen pounds when fully grown. Their closest relatives are the other temperate penguin species: the Galápagos, Humboldt, and African Penguins.

Penguins are birds, and they have feathers and lay eggs. But unlike most other birds, they cannot fly. While flying birds are lightweight, penguins have thick, heavy bones, allowing them to dive and swim underwater. Their wings are more like flippers that are adapted to help penguins “fly” through the water. The torpedo-like shape of their bodies and their feathers help them swim rapidly. They have three hundred times more feathers than flying birds of the same size, with a layer of down that traps air for insulation and an outer layer of feathers that can lock together to form a water-tight covering. Their feathers also help control the penguin’s body temperature. They spend up to three hours a day preening to ensure that the feathers are clean.

Special thanks to P. Dee Boersma for her scientific expertise in reviewing this article. 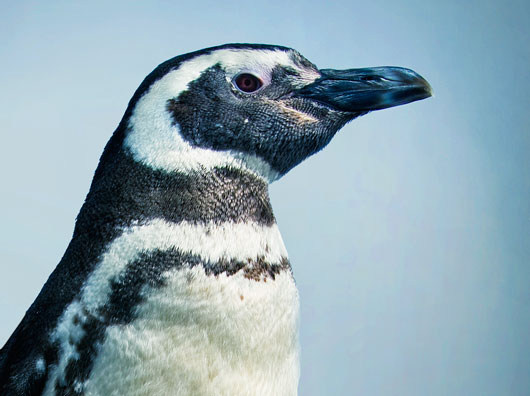 So why are penguins black and white? This adaptation is a kind of camouflaging called counter-shading, which makes it harder for both their predators and their prey to see them. When penguins are in the water, their white chests camouflage them from being seen from below against the lighter sky. From above, their black backs help them blend in with the darker blue ocean waters. In the ocean, penguins’ predators include seals, sea lions, and killer whales. 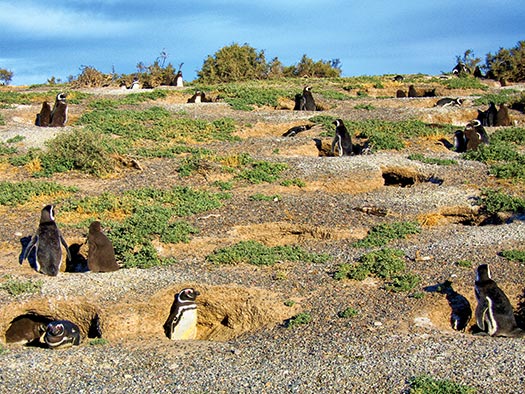 Magellanic Penguins build their nests during the breeding season along the rocky, sandy beaches of the southern coasts of Argentina and Chile and on the Falkland Islands. The largest colony of Magellanic Penguins, with more than 200,000 breeding pairs, is located at Punta Tombo in Argentina. If the nest has not been destroyed over the course of the year, Magellanic Penguins may use the same nest for several years. Magellanic Penguins nest in the open or under bushes and some burrow into the soil by lying on their bellies and digging with their feet. Breeding grounds may contain thousands of nests.

Penguins vocalize to recognize each other. Each penguin’s voice is as distinct as a human fingerprint. Many Magellanic Penguins are faithful to their partners. They nest once each year, usually laying their eggs in October. The female lays two eggs four days apart. The parents take turns incubating the eggs, lying on the nest on their bellies, and caring for the chicks once they hatch. The amount of time it takes for the chicks to grow and fledge depends on the availability of food and the parents’ success at foraging. 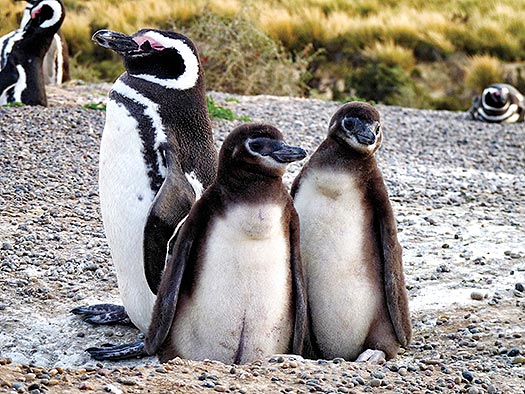 Penguin chicks have a high mortality rate. In some places they starve or are eaten by seabirds and small mammals. They can also freeze to death, a risk for the Antarctic species. One parent goes out to sea to feed while the other stays at the nest with the chick. Parents feed their chicks by regurgitating partially digested food. Penguin chicks leave the nest and their parents’ care once they have fledged. This involves losing the downy feathers they hatch with and growing a full coat of water-tight feathers. Fledging usually occurs after two to four months.

Adult penguins molt their feathers after the breeding season ends and chicks have fledged. All birds lose feathers and grow new ones, but penguins have adapted to molt and regrow all their feathers at once. Penguins go on a feeding binge to bulk up before molting. Because their feathers are not water-tight during the molt, they stay onshore and fast during the two to five weeks it takes for new feathers to grow in. During this period penguins are particularly vulnerable to predators on land. Depending on the region, penguins are hunted by foxes, leopards, and other small mammals as well as other seabirds, like gulls. Once the molt is completed, penguins are able to return to the sea and begin their travels in search of food. 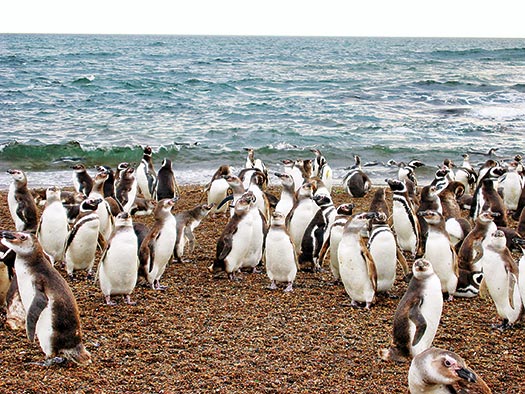 When they are at sea following the food supply, Magellanic Penguins migrate along the coasts of Argentina and Chile, reaching as far north as Peru on the Pacific side and Brazil on the Atlantic side. Penguins spend most of their lives out at sea searching for their favorite foods, including fish, squid, and krill. They depend on the cold, nutrient-rich ocean waters that carry vast schools of anchovies and krill.

These penguins can be distinguished from other temperate species by the two black stripes on their chests. Other temperate species have just one stripe. It is difficult to distinguish males from females, although adult males have thicker bills and are larger than adult females. Their vocalizations include loud braying calls that sound like a donkey as well as location calls at sea. 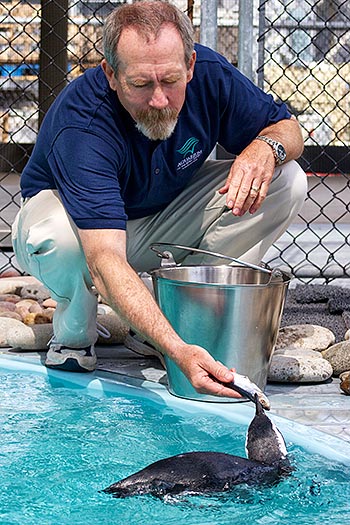 Magellanic Penguins are naturally curious and have excellent eyesight. In aquariums and zoos they are known to notice new objects in their enclosures or changes made to their routines. At the Aquarium for example, the penguins are used to seeing humans wearing the Aquarium uniform and are more hesitant around a visitor in different clothing. They are amenable to some training and will follow a trainer’s instructions to swim across a pool and back, for instance.

Be sure to visit the June Keyes Penguin Habitat at the Aquarium and witness the behaviors and personalities of these penguins firsthand.