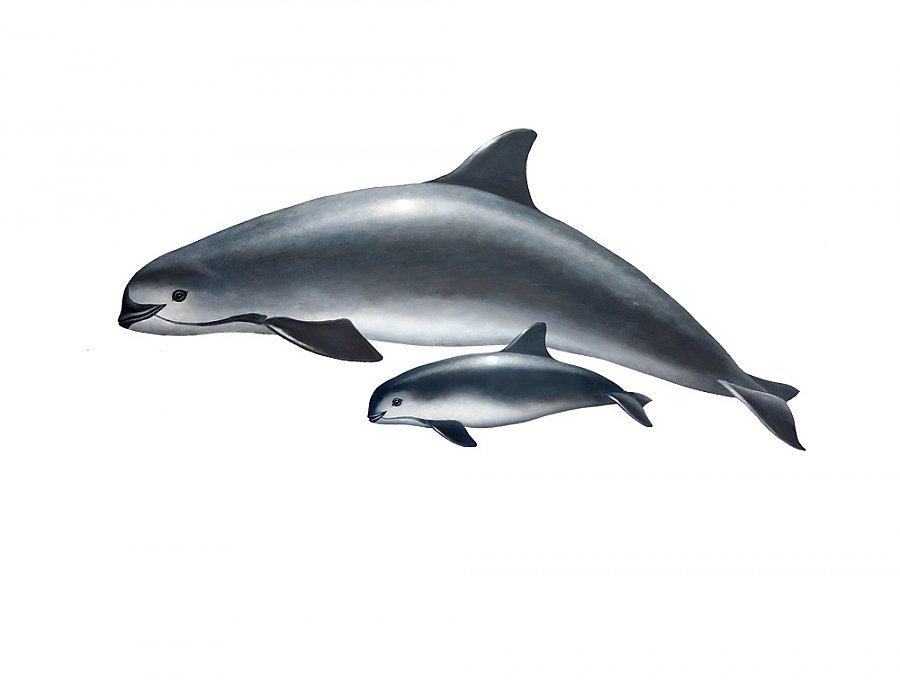 The Aquarium of the Pacific and a team of aquariums and zoos across the country are asking the public to get involved in order to help the smallest cetacean (whale, dolphin, or porpoise) on the planet. Found only in the northern part of the Gulf of California, Mexico, the vaquita porpoise is the world’s most endangered marine mammal. Scientists estimate that only about thirty vaquitas remain. This represents a decline of more than 92 percent since 1997. Unless Mexico extends the gillnet ban enacted in 2015 and enforces regulations to stop illegal fishing, the vaquita will be driven to extinction within five years, according to experts.

WHAT IS THE RISK?

For decades, the vaquita population has been declining due to accidental entanglement and drowning in gillnets used to catch fish (sold primarily domestically) and shrimp (primarily imported into the United States). However, since 2011, there has been a catastrophic decline of vaquitas amid a resurgence of illegal gillnetting for another endangered species, the totoaba. Air bladders from these fish are prized in the illegal wildlife trade in China, selling for thousands of dollars per kilo.

WHAT IS BEING DONE TO SAVE THE VAQUITA?

The government of Mexico is taking unprecedented conservation actions to stop the impact of both illegal totoaba fishing and legal gillnetting by local fishermen. Mexico’s president imposed an emergency two-year ban on gillnets throughout the range of the vaquita in May 2015. The Mexican Navy oversees enforcement and local fishing communities are receiving millions of dollars of compensation for lost income. However, the ban must become permanent if the species is to survive and recover. Importantly, new methods of legal fishing are also being developed. A handful of fishermen working alongside gear experts, government scientists, and nongovernmental organizations, are designing, testing, and implementing innovative new fishing gears that do not use the entangling nets to legally catch fish and shrimp without endangering vaquitas.

The United States is the largest importer of shrimp and seafood products harvested legally in the Gulf of California and seafood consumers can make a difference by purchasing responsibly-sourced seafood – wherever they shop. The Aquarium of the Pacific’s Seafood for the Future partners—Kings Seafood, Santa Monica Seafood, and Catalina Offshore Products—have agreed to purchase the vaquita-friendly seafood for sale in the U.S. when it becomes available.

“Seafood that is produced using the best available science, management, and technologies can be one of the most environmentally friendly sources of animal protein. We need to eat more seafood to support a healthy and sustainable food supply, but we must do so responsibly,” said Kim Thompson, Aquarium of the Pacific Seafood for the Future program manager. “In the case of the vaquita, that means buying the shrimp and seafood fishermen harvest with the alternative fishing gear, thereby supporting those who are working hard to implement the necessary conservation measures to save a species while sustaining their livelihoods.”

WHAT CAN YOU DO?

It is vital that consumers support the “Vaquita-Friendly” labeled seafood when it comes to the U.S. market. In the meantime, here’s what consumers can do to support conservation efforts for the vaquita and other species that may be impacted by unsustainable fishing practices:

The vaquita is just one of many species impacted by human activities. Ten years ago, the Baiji river dolphin in China became the first known cetacean (whale, dolphin, or porpoise) to go extinct, likely due to unsustainable fishing practices. Humans have been responsible for many extinctions on land, but surprisingly few in the sea. Despite this, humans have impacted virtually all major marine ecosystems. But all hope is not lost, and it is not too late to change the fate of ocean-dwelling animals facing extinction, such as the vaquita. Such efforts require collaborative solutions designed to ensure the health and well-being of the World Ocean and its inhabitants while sustaining livelihoods for those who depend on the local ecosystem services the ocean provides.

Last year, the Mexican government instituted a two-year ban on all gillnet fishing within the vaquita’s range, but illegal fishing for totoaba, a large croaker (also endangered) continues. The totoaba is fished to meet the black market demand for its swim bladder, which is highly prized for its perceived medicinal attributes overseas. “If Mexico managed to solve this problem for vaquitas, it would set an example for other nations, showing that fishermen can fish sustainably and coexist with porpoises, dolphins, and other sea mammals,” says Barbara Taylor, co-chief scientist of the vaquita survey and National Oceanic and Atmospheric Administration Fisheries biologist.

The Aquarium of the Pacific has been a leader in educating the public about the plight of the vaquita and is working with the Association of Zoos and Aquariums (AZA) to amplify conservation efforts for the vaquita among its more than 230 members through SAFE: Saving Animals From Extinction (SAFE). The goal of SAFE is to combine the power of AZA’s 183 million annual visitors with the resources and collective expertise of AZA members and partners to save animals, like the vaquita, from extinction. Learn more at: https://www.aza.org/SAFE/.

Seafood for the Future:

The Aquarium’s Seafood for the Future (SFF) program provides science-based information about seafood and its role in the global food supply to help businesses make informed seafood choices that benefit the health and well-being of fish, people, and the planet. Learn more at: