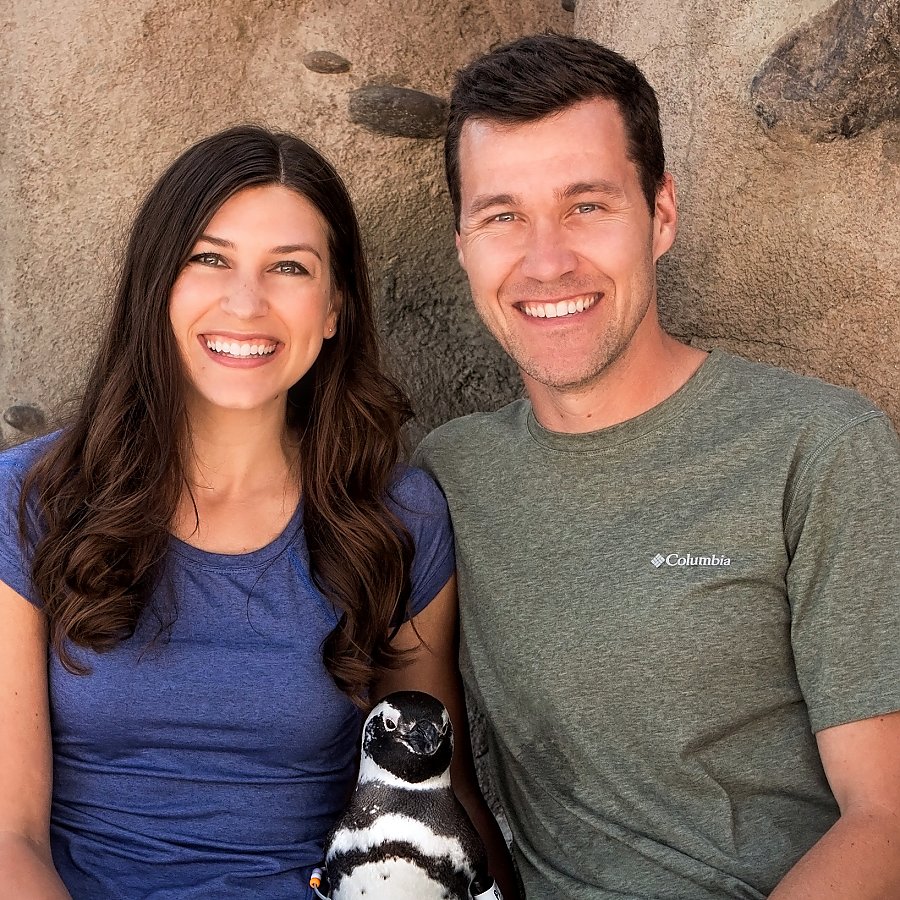 Hestermanns pose for photo with a penguin.

Many of our staff members spend their time outside of the Aquarium working on passion projects. Such is the case with Josh and Bethanie Hestermann, who recently published their second book titled Marine Science for Kids. Today Bethanie shares what it was like to write a book with her husband Josh.

While writing our first book, Zoology for Kids, my husband Josh and I had already decided we wanted our next project to focus on marine science. We were living in Chicago at the time, and by the time Zoology for Kids came out and we were ready to pitch the second book to our publisher, Josh had accepted a job as a mammalogist at the Aquarium of the Pacific. So, we moved to California.

When we pitched the idea for Marine Science for Kids in May 2014, our publisher was thrilled with the idea, and we felt like we were in a really good place to write the new book—right next to ocean!

At the Aquarium, Josh was continuing his career working with marine mammals by caring for seals, sea lions, and sea otters. I soon joined him on staff as a volunteer in the education department and got to be involved in the ocean science education that happens at the Aquarium every day.

Writing a book is a huge commitment and, for us, it took two years from start to finish for each book. The first part of the process involves tons of research about what’s already out there, what the market needs, and, of course, the subject you’re writing about. We checked out all the library books we could find about marine science that were written for kids and soon discovered a void. There needed to be something between basic picture books for young children and more formal textbooks for high school and college students.

That’s where we felt we would fit in with Marine Science for Kids, and our publisher agreed! We wanted to write a book that would be fun and engaging, yet more in-depth than other books that were already out there. Plus, we felt that kids really deserved an intelligent book that didn’t gloss over the science or shy away from using real scientific terms!

Once we established the overall idea of the book, we had to figure out a structure. Marine science is a vast topic, but after many brainstorming sessions, we finally decided on seven engaging chapters covering topics ranging from deep-sea ecosystems to freshwater life.

Each chapter opens with an anecdote that helps set the theme for that section. We also peppered in twenty-one fun activities that extend learning, along with beautiful photographs on almost every page and Cool Career sidebars that highlight real-life marine scientists.

One important chapter addresses the many issues facing Earth’s oceans and freshwater ecosystems. It explains the negative effects of plastic pollution and oil spill accidents, and it also inspires hope that kids can help conserve our oceans, lakes, and waterways.

While writing the book, we both maintained our full-time jobs—Josh as a mammalogist at the Aquarium and me as a freelance writer. It was easiest for me to wake up early and work on Marine Science for Kids while Josh, who is more of a night owl, preferred working on his tasks late into the night. There were times when it felt like all we did was work, write, and sleep.

Even though the book was demanding at times, it’s all worth it knowing that we may have a positive influence on kids and Earth’s marine and freshwater ecosystems. Marine Science for Kids is just as much about education as it is about inspiration. We hope our readers take away the key idea that that you don’t have to be an adult to make a difference, and kids can be a powerful force for conservation too!