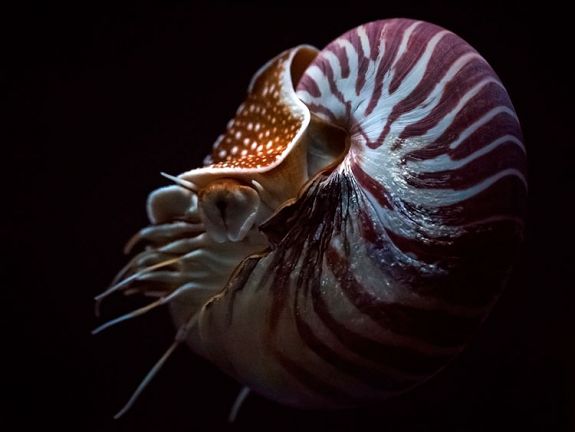 The chambered nautilus is not currently exhibited at the Aquarium.

The nauilius in most geographic areas spend daylight hours near the bottom of coral reef deep slopes to depths of 450 m (1500 ft) migrating vertically at night to shallower waters of about 90 m (300 ft) or less to seek prey. Recent studies have shown that individual population and habitat characteristics may determine daily vertical migrations of regional nautilus populations. Factors such as requirement for buoyancy regulation, preferred feeding habitat and predator avoidance may combine to create vertical migration patterns best suited to each distinct population and location.

This cephalopod with an external shell is considered primitive compared to its relatives, the octopus, squid, and cuttlefish. Its shell, which is produced by its mantle, is divided into compartments, ranging from four in a newly-hatched nautilus, to 38 or more in mature individuals. As the animal grows, its body moves forward and a wall called a septum is produced that seals off the older chambers. The body is contained in the last compartment—the newest and largest of them all. The animal can completely withdraw its body into its shell, closing the opening with a leathery hood. A nautilus does not have suckers on its tentacles like an octopus does. Instead its tentacles are lined with alternating grooves and ridges that allows it to grip objects.

The beautiful nautilus’ shell is white to orange, with white stripes and a central, black whorl.

This nocturnal opportunistic feeder eats shrimp, crabs, fishes, dead animals, and occasionally another nautilus. It is believed that prey is detected by smell since the animal lacks good vision. Food is captured by its retractable tentacles and passed to its mouth where a beak-like jaw tears it into pieces. Its radula, a file-like feeding structure, further shreds the food before it is swallowed.

Little is known about nautilus reproduction in the wild. Most information is based on observations made of animals in protected environments. The nautilus takes 5-10 years to reach sexual maturity, a very long time when compared to most other cephalopods. The male uses his tentacles to hold onto the female’s shell while using a specially modified arm to transfer a sperm packet into the female’s mantle cavity. The female lays several eggs, one at a time. Each emerges covered with layers of membranes that form a leathery protective covering. She uses her tentacles to attach each egg to a hard surface where it remains for 9-12 months before emerging as a 3 cm (1.2 in) hatchling. The eggs and hatchlings of the chambered nautilus are the largest of all cephalopods.

In addition to protecting the animal’s soft body, the shell has another important function which is to provide enclosure of a system that enables the nautilus to control its buoyancy. The older closed chambers of the shell contain an argon-nitrogen gas mixture and a liquid saline solution. The chambers are connected by a tube called a siphuncle that gives the nautilus the ability to change the ratio of liquid to gas which modifies its weight. These changes can result in whatever buoyancy it chooses: positive, negative, or neutral and are much like a submarine filling or emptying its dive tanks.

The nautilus moves in a see-saw motion using “jet propulsion” by alternately pulling water into the mantle cavity within the shell and blowing it out the muscular, flexible siphon beneath the tentacles. The way the siphon directs the water stream controls the animal’s forward, backward, and sideways movements.

Little changed over the past 500 million years, the chambered nautilus is considered a “living fossil”, like the horseshoe crab and the coelacanth. The relatively primitive creature swimming in the ocean today has been traced back to a time before there were bony fishes, and before dinosaurs roamed the earth.

The eyes of a nautilus are poorly developed compared to the complex ones of most other cephalopods. The simple, pinhole eyes lack lenses and probably form blurry images at best.

Unlike most other cephalopods that have a short life span, the chambered nautilus can live 16 or more years.

Although the ornamental shell trade continues to threaten nautilus populations and has resulted in major declines in localized populations, currently protection is still lacking except in Indonesia which banned collection in 1987.

June 2014: The U.S. Fish and Wildlife Service (USFWS) convened a workshop to address the biology and protection of the chambered nautilus. At that time chambered nautilus were not protected internationally under the IUCN Red List of Threatened Species because of lack of sufficient evidence about the populations. They also were not listed under the Convention on International Trade in Endangered Species of Wild Fauna and Flora (CITES) or protected specifically under U.S. domestic laws. The USFWS funded funding research to gain a better understanding of their current status and the impact of nautilus fishing and trade on wild populations. The USFWS collaborated with the National Marine Fisheries Service (NMFS), other range countries, researchers, and others in this study.

September 2016: Delegates to the 17th meeting of CITES will discuss and vote on protection of the chambered nautilus and if approved, will assign Appendix 1 or ii levels of protection. This nautilus species will then be projected in international trade. The USFWS has announced that the Service will support protection of this nautilus.

Chambered nautili are known as living fossils because they have remained virtually unchanged for millions of years.In 1997-98 paleontologists used DNA techniques to compare tissues from today’s animals to those of millions-of-years-old fossil nautiloids, dating to the time when California and Washington State were under the ocean. These studies confirmed the belief that the species Nautilus pompilius is a living fossil. The chambered nautilus (Allonautilus and Nautilus species) is the only living descendent of a group of ocean creatures that thrived in the seas 500 million years ago when the earth’s continents were still forming. It is even older than the dinosaurs!

Named after the chambered nautilus, the USS Nautilus launched in 1954 was the first nuclear-powered submarine in the world. This cephalopod was also the subject of Oliver Wendell Holmes’ famous poem, The Chambered Nautilus. The line of exercise equipment called the Nautilus™ got its name from its pulleys that are shaped like the cross-section of a nautilus shell.

In most geographic areas, the chambered nautilus migrates vertically at sundown from depths of 610 meters (2000 feet) to 91 meters (300 feet) to seek prey, returning to the deep ocean at sunrise.

The chambered nautilus, a cephalopod, is a relative of the ancient ammonoids and a modern relative of squid, octopus, and cuttlefish. Unlike its relatives, the nautilus has an external shell. It inhabits ocean waters close to the sea floor during the day, migrating to shallower water at night in search of prey.