Transport yourself to the coastal lowlands of Australia 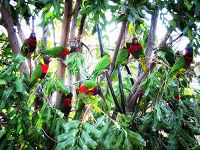 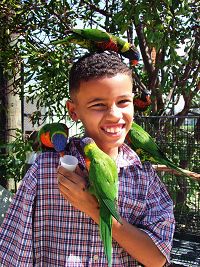 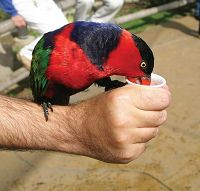 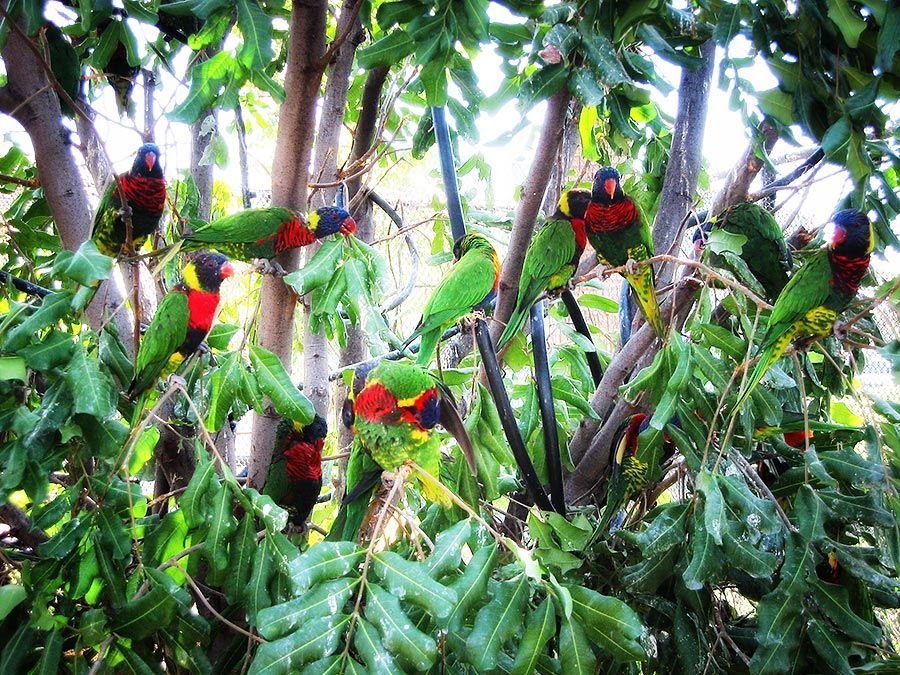 The Aquarium's aviary is home to approximately 140 lorikeet birds. 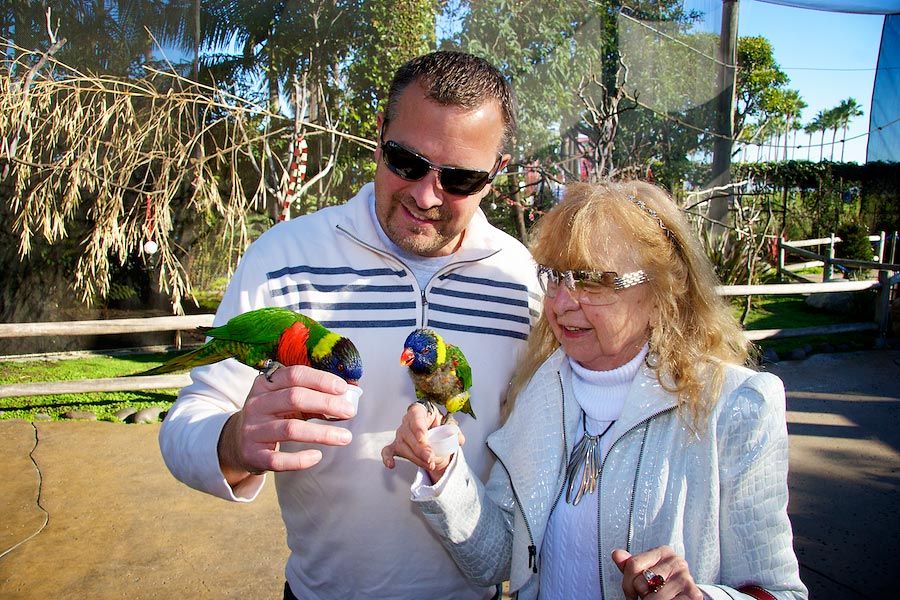 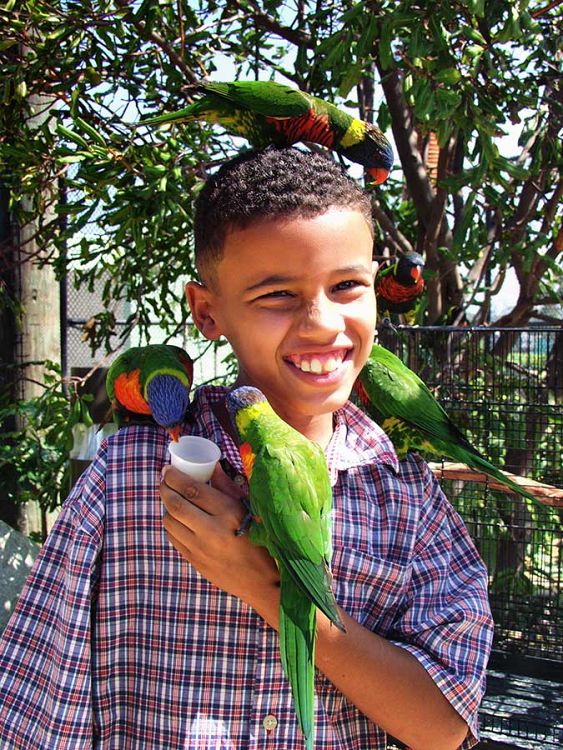 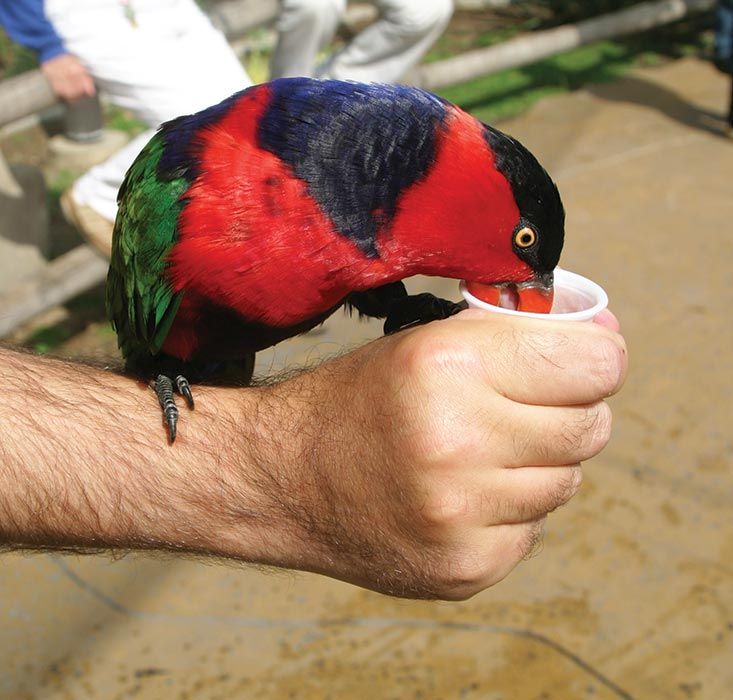 Transport Yourself to the Coastal Lowlands of Australia

Imagine walking down a winding path lined with a waterfall and trees. You hear chirping overhead. It grows louder and louder until you spot them—brilliantly colored lorikeets fill the air looking for a resting place. At last they find the perfect spot: your arm or even your head!

Transport yourself to the coastal lowlands of Australia when you enter Lorikeet Forest, a 5,400-square-foot outdoor aviary. More than 100 lively lorikeets fill the trees. Purchase a small cup of nectar, the lorikeets’ favorite food, to feed the birds as you walk through the exhibit. They will land on your hand, arm, shoulder or even your head to get a sip of sweet nectar!

Lorikeets spend approximately 70 percent of their time feeding. They can feed on thirty to forty eucalyptus flowers per minute! While searching for food, the birds can travel more than thirty miles daily, stopping in ten-second intervals to scan the area in search of food.

The lorikeet’s diet is comprised of nectar, pollen flowers, fruits, berries, and unripe grain. Their diet is limited to soft food because these birds have weak gizzards, which break up harder foods like seeds. Thus, they have a specialized tongue that allows them to easily consume their soft food and liquid diet. Tiny hair-like appendages called papillae form a U shape on the end of the lorikeet’s tongue. When the tongue is extended, these papillae become erect, like bristles on a brush, expanding the tongue’s surface area and allowing the birds to easily soak up nectar and collect pollen from the blossoms. Unique to lorikeets, these papillae have earned them the name “brush-tongued parrots.”

Another characteristic unique to lorikeets is their beak structure. Designed to easily extract hard-to-reach seeds from cones, the birds’ upper mandible has a pointed tip and is much narrower than that of their parrot relatives. For harder fruits found in rainforest trees, the birds scrape the fruit on the inside of their open bill and then removing the sweet juice with their specialized tongue. top

Home Base and Taking Wing 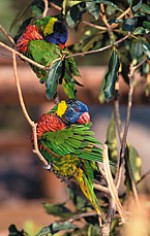 The lorikeets’ roost is a centralized location where, it is thought, the birds congregate to share information. Spreading the word about discovered food resources, finding potential mates, and teaching feeding techniques to inexperienced fledglings are possible “topics of conversation.” Roost sizes vary seasonally, some having as many as 50,000 birds!

In the misty morning hours the flock leaves the roost to begin its journey to the feeding grounds, which are generally found within a twenty-mile radius. The birds seem to find the way from their roost to their various feeding sites by using paths that tend to follow geographic features like hills, valleys, or rivers. Traveling flocks generally consist of sixteen members, while feeding flocks may include up to twenty birds. At times, when several traveling flocks land in the same location, you may see up to 1,000 lorikeets all at once!

Living in the treetops and searching for food requires long hours of flying over great distances. With rapid wing beats, the lorikeets have an advantage for high speeds and long-range flights at high altitudes. For shorter distances, the birds can also easily maneuver between the thick trees. Just before sunset, the lorikeets return to their roosts to settle in for the night before making their long journey again in the morning. top 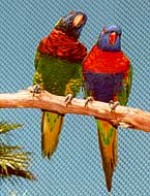 For lorikeets, mating and nesting require just as much planning as their feeding routine. Lorikeets will travel long distances in an effort to locate a suitable nesting site. They typically build their nests in tree cavities, often as high as 80 feet (25 m) above ground. Numerous tree hollows are investigated before one is chosen. To prepare the nest, they add a layer of wood dust at the bottom of the tree cavity.

The male will display courtship by arching his neck and bobbing his head, all the while emitting a low whistle. The female’s interest in mating will depend on how close she is to nesting. Once mating has occurred, the female lays a clutch, or group, of two or three white, oval-shaped eggs in the nest. The eggs are incubated by both parents for approximately twenty-five days before they hatch. Thought to mate for life, a pair of mating lorikeets can produce up to three clutches of eggs a season.

Both the male and female will feed the new hatchlings until they move into the communal roost. The young will leave the nest for the first time after seven to eight weeks, but may remain with their parents over the summer. Although lorikeets reach sexual maturity around nine months of age, most birds do not breed until they are two or three years old. In the wild, lorikeets have a life span of fifteen to thirty years. top

A Species In Danger

There are fifty-three species of lorikeets and about thirty-two subspecies of the Rainbow Lorikeet. At least thirteen lorikeet species are considered endangered or vulnerable to extinction. The destruction of lorikeet habitats for logging and agriculture as well as the introduction of rats and snakes to South Pacific islands are a major contributor to their decline. 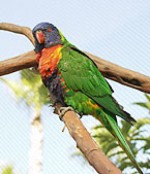 Unfortunately, because the lorikeets’ diet consists of apples, pears, and corn, they are responsible for a significant amount of crop damage and are considered pests by many. In Darwin, Australia, as much as 80 to 90 percent of tropical fruit crops have been lost to the Rainbow Lorikeets. In New Zealand, the capture of Rainbow Lorikeets is encouraged by the Department of Conservation. They pose a threat to other bird species that are indigenous to the area, so they have been declared an “Unwanted Organism” by the Biosecurity Act 1993. Pet owners are encouraged to keep their lorikeets in secure caging, otherwise strict penalties are enforced for anyone found releasing a lorikeet into the wild. Joining only a small number of species, Rainbow Lorikeets have been added to the Fifth Schedule of the Wildlife Act, meaning they are no longer protected.

Through educational efforts and by instilling a sense of respect for the beautiful lorikeets, we hope we are able to see their dazzling colors shine through the misty treetops for years to come. top 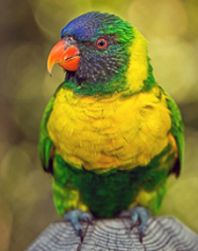 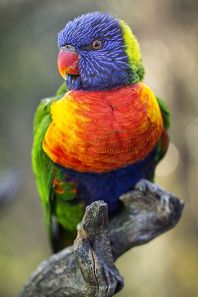 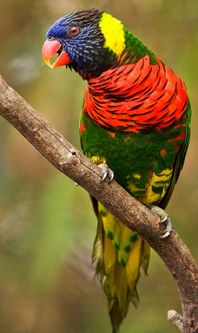