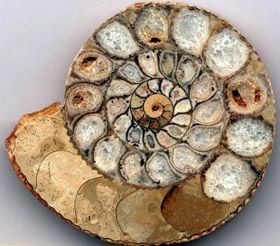 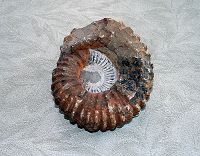 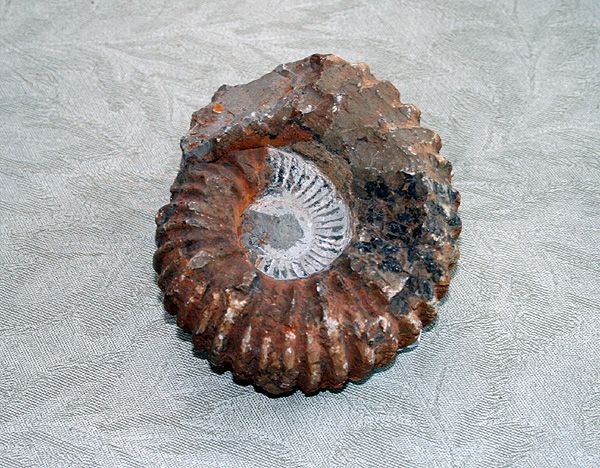 © L.Young, Aquarium of the Pacific

The fossil ammonites are no longer on display. To view ammonites visit the Los Angeles County Natural History Museum.

Ammonoid fossils are found around the world in a variety of marine sedimentary rocks that range in age from the Early Devonian (415 mya) to the Late Cretaceous (65 mya).

Ammonoids are descendants of the extinct, primitive coiled nautiloids and they are extinct relatives of modern squid, octopus, cuttlefish, and nautilus. Their shells were generally flat spirals containing a series of progressively larger chambers divided by thin walls called septa. The junction of each septum with the outer shell wall is called a suture and it is these sutures that reveal the internal complexity of the ammonoid shell. Attached to the inside of the keel of the shell wall was a thin calcareous tube-like structure called a siphuncle which passed through each of the animal’s empty internal shell chambers. The living animal added chambers to the open end of the coil as it grew and its body occupied only the newest chamber.

Voracious predators, ammonoids fed on a variety of marine creatures including fish, crustaceans, and, especially during the Paleozoic, trilobites. They probably migrated at night from the ocean depths to shallower areas to feed, just as the chambered nautilus does today. It is believed that they captured prey with their retractable tentacles and passed it to their mouth where a beak-like jaw tore it into pieces. Their radula, a file-like feeding structure, further shredded the food before it was swallowed.

Little is known about the reproduction of this species.

Like their modern day relatives, ammonoids swam by using jet-like propulsion. It is believed that by secreting gas and fluids into the hollow shell chambers through their permeable siphuncle that they could regulate the air pressure in the chambers and thus control their balance, buoyancy, and depth in the water column.

By examining bite-marks on ammonoid shells, scientists have determined that they were preyed on by large marine reptiles and fish. One reptile was the mosasaur, a giant snake-like reptile that measured up to 18 m (59 ft). It attacked the ammonite and extracted its body, leaving the shell to eventually sink to the ocean floor where it became fossilized.

Early in the evolution of ammonites the sutures were gently wavy lines but over time they became convoluted and more complex. The differences in the suture patterns help paleontologists to study ammonoid evolution.

The reason why the ammonoids that had adapted for millions of years became extinct while their more primitive relative, the chambered nautilus, survived is a puzzle to scientists. Many believe the reason may be related to the difference in the anatomic placement of the siphuncle, the tube which allowed transfer of fluid and air inside the chambers of the shell. In the nautilus, the tube passed through the central part of each partition and was therefore positioned in the better protected central part of the whorl. In contrast, in the ammonoids it was located next to the outer margin along the keel of the shell, where it was potentially more susceptible to injury. Another theory is that because ammonoids grew faster and had thinner shells, the shells were not as strong as those of the nautilus. Some paleontologists believe that extensive predation so reduced the numbers of ammonoids that there were not enough to survive the mass extinction of 65 mya.

Ammonoids were common in the oceans of the late Paleozoic and Mesozoic eras, from about 400 to 65 million years ago, becoming extinct at the same time as the dinosaurs. Although not accurately known, one estimate of the life span of the ancient ammonoids is 4-36 years.

Ammonoids are commonly used as index fossils. These are fossils found globally in great quantity and within a relatively limited time span, both of which make them helpful in dating rocks in widely separated areas. Knowing when particular species of ammonoid lived helps date rarer fossils of unknown age when they are found in the same rock formation as ammonoids.

Ammolite is a semi-precious gem formed by the outer shell of fossilized ammonoids. During the Cretaceous Period (65-145 mya) the shallow, warm Bearpaw Sea partially covered central North America from the Gulf of Mexico to the Canadian Arctic. This sea was bordered on the west by the developing Rocky Mountains. Today, this area includes ammolite-rich Alberta, Canada where the gem is mined.