One of our zebra sharks in Shark Lagoon. | Aquarium of the Pacific and K. Leonard 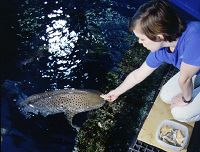 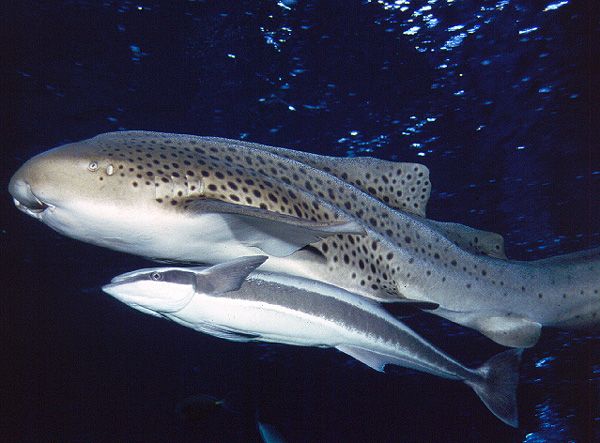 A zebra shark in the Aquarium's Coral reef with a sharksucker 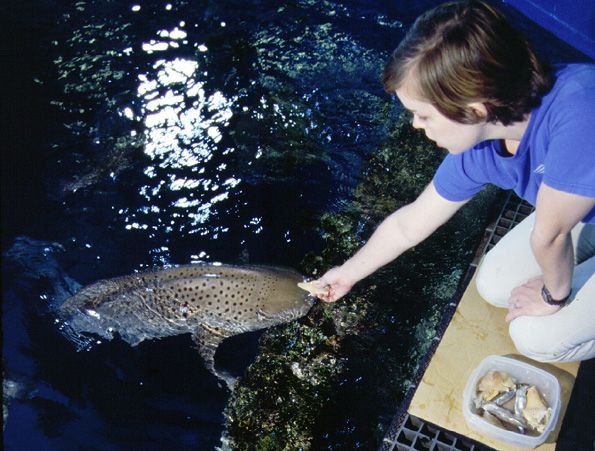 Handfeeding one of our adult zebra sharks at the surface of the Coral Reef water.

The Aquarium has zebra sharks on view in the Shark Lagoon and Tropical Reef exhibits.

Adult zebra sharks prefer inshore marine or brackish waters with depths from intertidal to 30 m (99 ft) where there are reefs and sandy, rubble, or coral bottoms. There is an unconfirmed report of a zebra shark living in fresh water in the Philippines. Juvenile zebra sharks inhabit deeper waters than adults seeking depths of 50 m (165 ft) to hide from predators.

Adults have a cylindrical body with a broad head and small mouth. Prominent longitudinal ridges run down their dorsal surface and on the flanks. A ‘face’ is formed on the ventral side of the head by the blunt snout, prominent nares, a small transverse mouth, and short barbels at the front of the snout. Grooves connect the nares to the mouth. There are five gill slits. The caudal fin is almost as long as the body. It has a deep terminal notch but the lower lobe is only slightly notched. There are two dorsal fins immediately adjacent to each other with the first much larger than the second. The large pectoral fins are very rounded.

Juveniles are dark brown or blackish with narrow pale yellow or white vertical bars and/or spots. They change coloration when they are 50 to 70 cm (20 to 27 in) in length. At this time they begin to develop their adult features. Their body ridges start to form and their bars fade, becoming black dots or open dark circles on a yellow to cream or light gray background, the adult coloration.

These sharks are nocturnal foragers. Their preferred prey is snails and bivalves but they also eat crabs, shrimps, and small bony fishes. Their flattened teeth with three raised points (cusps) and short jaws work together to grip, crush, and pulverize shelled invertebrates.

Zebra sharks reach maturity when the males are 1.5-1.8 m (5-6 ft) and the females 1.7 m (5.6 ft) in length. They are an oviparous species. The female releases one to four large dark brown or purplish-black egg cases that are about 17 cm (6.7 in) long and 5 cm (2 in) in diameter. Fine, hair-like fibers that cover both sides of the egg case anchor the case to the substrate where it will remain for about six and a half months (if not eaten by a predator). The zebra-striped pup is 20 to 26 cm (7.9 to 10 in) when it emerges from the egg case and is immediately independent, able to swim and hunt on its own.

This shark species is slow-swimming, moving with a pronounced eel-like wiggle. In areas where there is a suitable current they have been observed ‘surfing’, adjusting their fins to remain almost motionless in the water column.

Nocturnal sharks, they spend daylight hours lying on the ocean bottom, often in passes and channels through a reef crest where tidal flow brings in oxygen-bearing seawater. Open-mouthed and propped up on their pectoral fins with mouth and gills held above the substrate, they rest facing into the current.

Although usually solitary, zebra sharks do form loose aggregations of 20 to 50 sharks in shallow coastal areas during the breeding season.

The flexible body of a zebra shark gives it the ability to wiggle into narrow cracks, crevices, and channel in reefs to search for hidden prey. When a food item is encountered, the combination of a small mouth, thick throat, and gill muscles give the shark the ability to forcibly suck up prey.

The lifespan in the wild is reported to be 25 to 30 years.

Zebra sharks are listed as vulnerable to extinction on the IUCN Red List. The reason for the listing is largely human activities. They are heavily fished throughout their range except in Australia. They are taken by inshore fisheries using bottom trawls, gillnets, or baited hooks. They are sold fresh and dried-salted for human consumption and for fish meal. Livers are processed for vitamins and there is a large market for fins for shark-fin soup and oriental medicine. In Australia where zebra sharks are present in large numbers, they have a wide distribution, are not a target species, and are captured in only small numbers in prawn trawls. The IUCN Red List assesses the Australian population as of Least Concern.

Zebra shark, the common name of these slow-swimming, non-aggressive, bottom-dwelling sharks, is derived from their juvenile coloration: narrow bars reminiscent of a zebra’s stripes. When the sharks grow into adults, the bars become spots. Their common name in Australia is leopard shark.