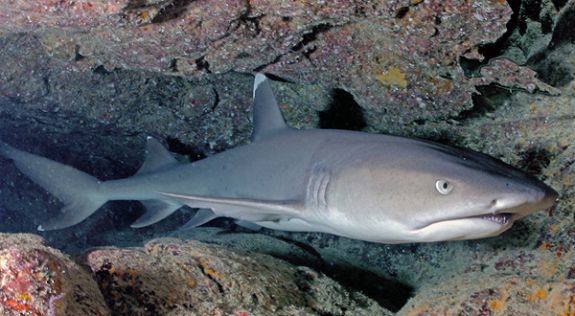 Whitetip shark under a coral reef ledge in the Northwest Hawaiian Islands. | Courtesy of NOAA 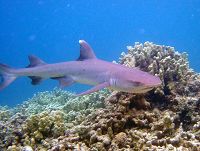 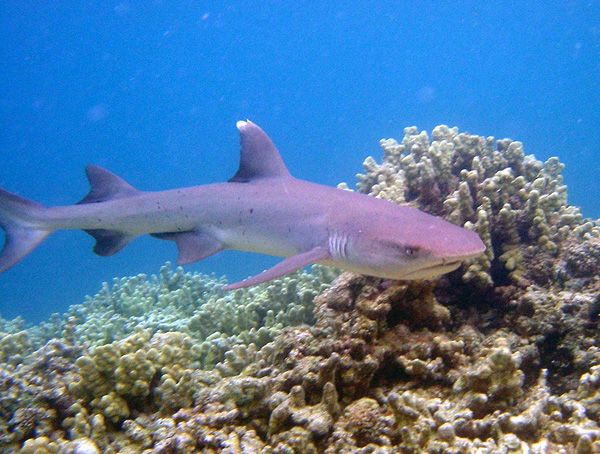 Our whitetips inhabit the Aquarium’s Shark Lagoon and Tropical Reef.

The whitetip reef shark is typically a bottom dwelling fish tending to prefer relatively shallow waters around coral and rock reefs with interspersed sandy areas. Their favorite reef configurations include caves and ledges that they use for protection. The species has been reported as deep as 330 m (1,083 ft).

Whitetip reef sharks have a slender fusiform body, an extremely short and blunt snout, a broad flattened head with prominent brow ridges, distinctively horizontally oval eyes placed laterally, and a down-turned semicirular mouth that gives this fish a rather dour expression. Spiracles are usually present, but may be reduced in size or absent. The fins are relatively large. The tip of the first dorsal fin and the tip of the slender upper lobe of the caudal fin are typically white, the characteristic markings from which the fish received its descriptive common name. Other fins may inconsistently have similar markings. The upper half of the body may be gray or grayish-brown fading to off-white or a creamy color on the ventral side. Small gray spots may be scattered over some or all of the body.

These fish are not fussy eaters and their diet consists of a large variety of small bony reef fishes, including eels, and various invertebrates such as octopuses, crabs, and lobsters.

Male whitetips become sexually mature at about 1 m (3.3 ft) in length. Females are only slightly larger when they mature. It is thought that maturity comes at about five years of age.

Time of the year for breeding varies from one geographical region to another. This species is placental viviparous. Fertilization is internal. Embryos receive their initial nourishment from the yolk sac followed by conversion of the yolk stalk into an umbilical cord and the yolk sac into the placenta. This connection to the mother shark provides them with nourishment and metabolic exchanges during the gestation period which lasts at least five months. Litters consist of 1-5 pups, most commonly 2-3, which range in length from 52 to 60 cm (20.5 to 23.6 in). There is no parental care after birth.

When swimming, this species displays a very active undulating pattern. They seem to be content with a relatively small home range and may spend up to a year or more in an area within 0.3 to 3 km (0.2 to 1.8 mi) of a home base. They are not aggressively territorial and are willing to share the space with others of their species.

Daytime is mostly spent resting. Individuals will gather in aggregations, frequently lying on each other or otherwise crowded together in caves, under ledges, or in other similarly protected areas. It is common for them to return to the same place every day for their rest period, only occasionally changing location. They may also be seen lying motionless on a sandy bottom.

They are not generally considered to be dangerous. They tend to be rather shy, but are sometimes curious and will cautiously investigate a diver until satisfied and then leave. They tend to become excited around spear fishers and can become aggressive if they identify food in the water. They have also been known to protect themselves if harassed.

Because this shark is most active during the night hours it probably relies less on its sight ability than its sonic and olfactory senses that are well developed in most sharks. Also, as in other sharks, it has the ability to detect minute electrical charges produced by potential prey using specialized organs called ampullae of Lorenzini that are located on the snout.

This species may live to 25 years or more.

The IUCN lists this species as near-threatened because of reduction in habitat and depth range, small litter size, and relatively late age of maturity.

Fisheries records are limited, but this species is fished and used as food in varying quantities wherever it occurs. Because of its relatively limited habitat, it is easily captured in shallow water gill nets and may also be taken by long line or other hook and line fishing. Its commercial demand appears to be limited but overfishing could become a problem as populations of other species decrease. It has on occasion been reported to be ciguatoxic.

In Hawaii this shark is regarded by some people as a guardian spirit, aumakua, and is treated with reverence.

Whitetip reef sharks belong to the family Carcharhinidae which first appeared 63 million years ago (mya), two years after the extinction of dinosaurs. Fossil evidence of whitetips have been dated to 42 million years ago.

The whitetip reef shark is slender and sleek, with characteristic white markings on the tips of several of its fins. These markings gave it its common name. It is an agile swimmer well suited for its mostly reef habitat existence.