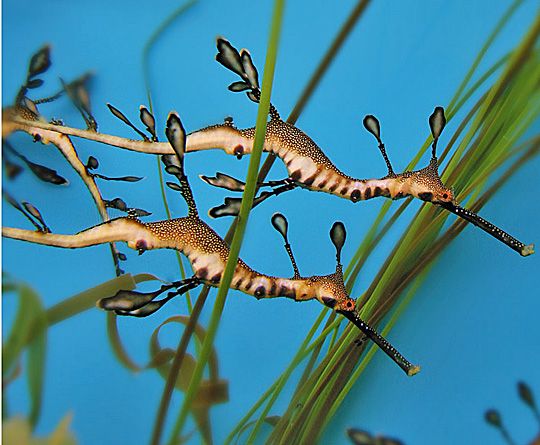 Seadragons like temperate water so the water in their habitat is colder than that in the rest of the Tropical Pacific Gallery exhibits. | Aquarium of the Pacific, B.Gray

Our aquarium was the first in the world to successfully breed weedy seadragons. Our juveniles were distributed to other aquariums and zoos in Minnesota, South Carolina, New Jersey, Texas, and Hawaii. Our experiences have been shared with other facilities so that successful breeding programs in protected environments can lessen collection pressure on wild animals. The Aquarium’s weedy seadragons are located in the Tropical Pacific Gallery.

This seadragon species inhabits temperate coastal waters where there are rocky reefs, sand patches close to the reefs, seaweed beds, and perhaps, seagrass meadows. The shallow coastal population fluctuates, influenced by fresh water runoff, rough seas, and food supply. In some areas fish stay in deeper water up to 25 m (82 ft), where visibility is greatest. They may be found in habitats where there are also sponges.

These fish have a small head, strong neck, long-thin pipe-like snout, and a prehensile tail that is more than half their length. The gill opening is a small round pore. The rounded, scaleless body is covered in hard bony plates. Their eyes are just behind and in line with their snout. Small leaf-like appendages protrude from their head, body, and tail. Number of appendages, color, and size vary with geographic location, depth and age. Their almost translucent fins are small. They have a few short spines that are used for defense.

Weedies in shallower waters are reddish-orange with yellow spots and purplish-blue bars. Those living in deeper water are brighter colored, often red-burgundy, and less leafy. There is some evidence that color is influenced by habitat and available food supply.

The maximum length of the weedy seadragon is about 45 cm (18 in).

Seadragons do not have teeth or stomachs and because they lack stomachs, they eat almost constantly and over wide areas, feeding on mysid shrimp and other small crustaceans, plankton, and larval fish. A seadragon uses its long, thin, tubular snout to create a strong suction with which to rapidly suck in the food item. It expands a joint on the lower part of its snout and swallows its prey whole. Special muscles in the snout can widen to accommodate different sizes of prey.

Weedy seadragons usually become mature in their second year of life when they are fully grown. The breeding season for weedy seadragons is in Australia’s early summer months. One brood is produced each season. Like their seahorse relatives, male seadragons brood the eggs. However, the eggs are incubated on the underside of the tail on a brood patch instead of in a brood pouch. The female lays 250-300 eggs that are 4 mm (0.16 in) in diameter and 7 mm (0.3 in) long. She deposits them in the skin of the male to be fertilized, covering most of the under and sides of his tail immediately behind his anus. His skin, soft at the time the eggs are first embedded, becomes hardened to form a cup around each egg to hold it securely for the 6-8 weeks incubation. Each egg receives oxygen via the cup’s blood-red tissue. The eggs are bright pink when freshly laid and darken as they develop. When hatching starts, the male releases only a few eggs at a time. He may take from hours to days to let go of the entire brood.

Fry unroll from their tight position in the egg capsule, coming out tail first. They have a very short snout, and lack leafy appendages. They settle out on the substrate in shallow water where they live off the still-attached egg capsule for about two days until their snout is more pronounced and they are ready to start hunting. They then fed on small zooplankton such as rotifers and copepods, eventually becoming large enough to hunt and eat mysid shrimp.

Usually solitary, these fish move to deeper water in the Australian winter when food is scarce. In late winter they migrate to selected shallow bays, forming congregations to pair and eventually mate.

The outer skin of seadragons is solid, limiting its mobility when fleeing from a predator. They also lack a caudal fin which adds to their weak swimming ability. Their flight consists of propelling through the water (‘swimming’) by rapidly oscillating their ventral and dorsal fins. Using their tail as a rudder, they propel themselves with their fins. They change the amount of air in their floatation or air bladders to hang vertically or move themselves up and down in the water column.

Slow-swimming with fragile bodies, seadragons depend on their camouflage to hide them from predators. Their leafy appendages, ability to change color to match their seaweed and seagrass habitats, and their prehensile tail with which to hang onto swaying plants make them less vulnerable to predators.

The swim bladders of these fish are very fragile and they cannot cope with sudden changes in water pressure or depth such as might occur in stormy weather. After a storm, many are found washed up on shore in a clump of seaweed.

In protected environments seadragons live for up to ten years of age. Their life span in the wild is not known but is believed to be five to seven years.

Seadragons are fully protected under Australia’s local, state, and federal legislation. Special licenses are required to collect or export them and in 2015 the Australian government stopped issuing such licenses

They are at risk from destruction of algae-covered reefs, seagrass meadows, and seaweed bed habitats by development, nonpoint source pollution, and agricultural fertilizer run-off. Urchin consumption of kelp beds and loss of giant kelp in Tasmania due to climate change is also a factor. They have been reported as bycatch in southeastern Australia trawl fisheries. In 2006 weedy seadragons were listed as near threatened on the IUCN Red List, primarily because of loss of habitat.

Inhabitants of temperate waters, increase of water temperature as a result of global climate change may impact their survival unless they can adapt to the changes.

The weedy seadragon is the official marine animal emblem of the state of Victoria in Australia. The emblem was selected by public nomination and was proclaimed by the governor of Victoria in October 2002.

Researchers doing population density studies have determined that individual seadragons can be identified by facial patterns.

Weedy seadragons are found only in Australian coastal waters where they are most commonly found in a thin strip of shallow water along the coastline. Although they appear to be seaweed when drifting in the water column almost motionless, weedy seadragons are actually bony fish. They are related to seahorses, pipefish, and seamoths.