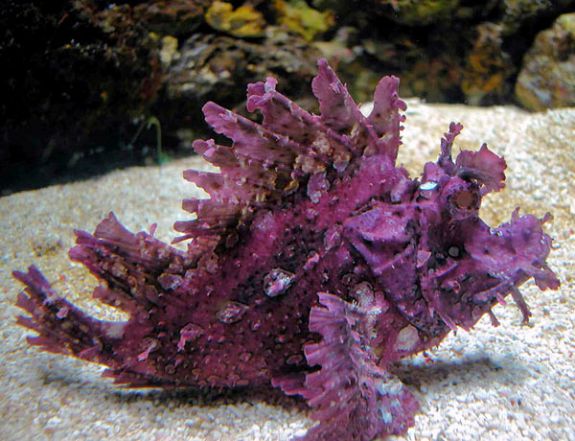 | Photo taken by K. Leonard. ©Aquarium of the Pacific

Northeastern Australia, East Africa, and other areas of the Pacific and Japan.

These fish are found in warm waters along coral reefs between 6 to 25 m ( ft) depth. They may also perch on top of coral,where even though they are in full view, they are difficult to spot because of their intricate camouflage.

Weedy scorpionfish have deep laterally compressed bodies with a distinctive head shape and high-set eyes. The mouth is are upturned. The snout is covered with tentacles. The body is covered with numerous skin flaps in a maze-like pattern. The flap colors can be in an array of colors from yellow to brown, green to black, pink, and purple. This elaborate design makes the weedy scorpionfish one of the most beautiful representatives of the scorpionfish family.

The weedy scorpionfish reaches a maximum length of 25 cm.

Weedy scorpionfish are primarily noctural, hunting for a meal prey at night. They feed mainly on ghost shrimp, mollies, guppies, small octopus, and other small reef animals. However, because of their large mouths, they can ingest relatively large prey as well.

Sexes are separate. From June to August, weedy scorpionfish migrate into deep water at depths of (110 to 300 ft) to broadcast spawn. After spawning, they return to their more shallow water habitat.

These fish exhibit cryptic behavior. Their specialized camouflage allows them to blend into their environment and remain virtually undetected by both predators and prey. For locomotion, they crutch along the bottom on their pectoral and pelvic fins. They rarely swim. When hunting, they remain motionless waiting for unsuspecting prey to approach within striking distance. Lunging forward, a weedy scorpionfish sucks in its victim. For added camouflage, the scorpionfish may sway back and forth mimicking debris or seaweed moved by the ocean currents.

Weedy scorpionfish can live to be more than 20 years old.

The weedy scorpionfish is not fished commercially or recreationally so it is not in danger of being overfished. As a coral reef inhabitant, it is directly linked to the coral reef environment and may be affected by the decline of reefs due to human activities, natural disasters, and global climate changes.

While waiting to ambush unsuspecting prey, weedy scorpionfish can remain in the same spot for weeks or even months at a time!

The weedy scorpionfish’s cryptic camouflage is an invaluable tool for hunting prey and avoiding becoming prey itself. Both prey and predators mistake the well camouflaged fish for a piece of seaweed.