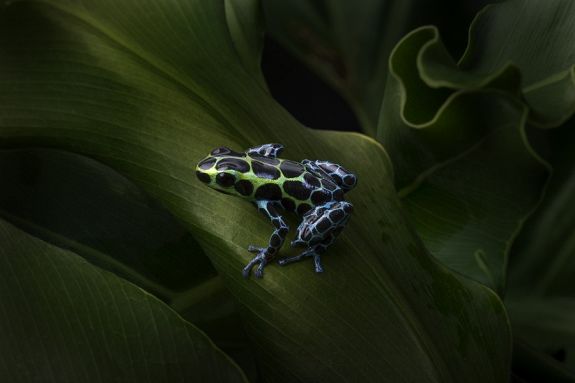 Our Variable Poison Dart Frogs are the southern morph. They are larger than other morphs and their spotting and coloration, especially where blue appears, are different. Captive-bred, they were acquired from a member of the Association of Zoos and Aquariums.

Native: Peru
Previously thought to be restricted to northern San Martin in Peru; however, following a 2011 field study, the range of this species has been greatly expanded. Now widely distributed throughout the east-Andean mountain slopes and adjacent lowlands of Peru and Ecuador, it extends well into the Amazon basin and has been observed as far west as La Pedrera, Colombia.

This poison dart frog species is semi-arboreal. It inhabits primary (undisturbed) rainforests in the summits of mid-level mountains. While it does inhabit the leaf litter on the rainforest floor, more often it lives above ground in a tree in the part of the rainforest that is humid and receives little sun (the understory of the canopy), or on bushes and shrubs.
Elevation: 2,970 to 3,950 feet.(900 to 1,200 meters) above sea level

Variable Poison Dart Frogs are small enough to be included in the group called thumbnail frogs. While coloration varies among the morphs, their back coloration most commonly is black spots on a background that gradually changes from a metallic yellow-green snout to a blue-green vent. They typically have a single large nose spot with two small spots at the tip of the nose and dorsal spotting or striping depending on the morph. Legs are usually metallic green to blue with very large black spots. The southern morph has larger spots than other morphs.

In the wild the Variable Poison Dart Frog’s diet includes ants, fruit flies, termites, young crickets, and tiny beetles. It is uncertain whether ants or beetles are the source of the chemical substances from which this poison dart frog derives the toxin that is stored in glands just under the surface of the skin. Their diet at the Aquarium does not include foods that have the chemical, so our frogs are not “poisonous.”

Mating takes place during the day, peaking after a rainfall. The only time males call is during the breeding season, when the intent is primarily to attract a female and court her. The calls are repetitive, short, buzz-like, and relatively low. When a female approaches, the male calls from an elevated perch and increases his call rate as she gets nearer. He then leads her to the breeding site, repeating his calls as they near the site and when they arrive.

The female lays two to six eggs under the surface of the pool of water that collects on a bromeliad or similar rainforest plant where the leaf connects to the stem. She then abandons the eggs. The male fertilizes the eggs by placing his vent against that of the female (facing opposite directions) while she is laying the eggs or by walking over the already laid eggs. Depending on the temperature, the tadpoles are ready to hatch in twelve to fourteen days.

Although all males are not parental caregivers, most are. These males return to the pool to transport the tadpoles to larger pools. Using his rear legs, the male opens the egg sac to free the tadpoles that then wriggle onto his back. He may use his back legs to push them onto his back. He carries one to six tadpoles at a time, usually placing a single individual in a new pool.

The tadpoles now begin to metamorphose into froglets. Their gills are grown over by skin, eventually disappearing to be replaced by lungs. Teeth and rear legs develop. The head becomes more pronounced and the body elongates. Front legs (arms) develop and the tail becomes a stub. At ten to twelve weeks old, with metamorphosis complete, a young frog or froglet leaves the water for a land habitat.

These frogs are primarily bromeliad-breeders, utilizing the rainwater that collects in the plant as an egg incubator and sometimes for tadpole growth if the “pond” is large enough. Bromeliads are abundant in some rainforest areas, such as high elevation mountain ridgelines. The frogs are able to reach bromeliads growing at low levels on tree trunks. Eggs are also laid in plants that have fallen to the ground.

Adult male Variable Poison Dart Frogs may use tactical reproductive parasitism to ensure survival of the most fit tadpole. This strategy takes place when the male deposits the tadpole or tadpoles he is carrying to a larger pool where there are other tadpoles, not always the same species. In the resulting competition, the tadpole that is the most vigorous and resistant to cannibalism, the most fit, usually survives.

Unknown in the wild. About five to six years in a protected environment such as a zoo or aquarium.

This species has a wide distribution, including areas where numbers are large and rainforests relatively undisturbed. The International Union for Conservation of Nature (IUCN) Red List of Threatened Species lists Variable Poison Dart Frogs as Data Deficient; however, the listing is based on 2004 field studies and the website states that its information needs updating.

Variable Poison Dart Frogs are currently (2017) listed as CITES Appendix II. CITES, the Convention on International Trade in Endangered Species of Wild Fauna and Flora, is an international agreement among governments. The United States is a CITES Party. CITES Appendix II requires that the government where the species is found must issue a permit before export. Captive breeding programs in several countries are now the major source of Variable Poison Dart Frogs.

Climate change: Many scientists believe that over time global climate change and rainforest degradation together could lead to increased temperatures and changing rain patterns in the Amazon basin. As a result of these changes in water availability and climate in the region’s rainforests, ultimately the animals and plants that currently inhabit the rainforests may be affected. Variable Poison Dart Frogs live in a wide range of mountain elevations. To escape increased temperatures at lower parts of the range, there is a possibility that frogs could move to higher and cooler elevations if there is still enough rain to water their breeding ponds and if given enough time to adapt.

Variable Poison Dart Frogs are bromeliad breeders. Bromeliads occur in abundance on tree trunks in higher rainforest elevations. Some bromeliad species can capture rainwater and store it in “water tanks” that the frogs use for breeding ponds. The long, curved, and overlapping plant leaves act as a gutter carrying the rainwater to the base of the leaves, where they connect to the stem to form a water reservoir. Very large bromeliads can hold two gallons of water, but the frogs can breed in as little water as a cupful.

The common name, Variable Poison Dart Frog, comes from the variability in coloration and patterns seen in this species. Once considered separate species, the frogs with different appearances have now been classified by taxonomists as the southern, spotted, and striped morphs. They are primarily bromeliad breeders, utilizing the rainwater captured by the plants as breeding ponds. The male is the parental caregiver. Variable Poison Dart Frogs are protected in the international pet trade.