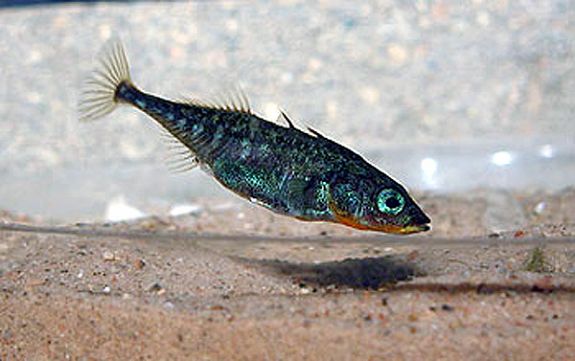 The Aquarium habitat for threespine stickleback is in the Northern Pacific Gallery.

They live in nearshore coastal waters in vegetated areas, usually over mud or sand.

The body of threespine sticklebacks is torpedo shaped and one quarter as deep as it is long. There are 28 to 33 (usually 30) vertically oriented scutes (bony plates) on each side and a single ventral plate on the lower surface between and behind the ventral fins. There are usually three free spines before the dorsal fin. The pelvic fin is reduced to a sharp spine and small ray. These fish are silvery-gray to bluish black in color with pale sides and yellow, white, or silvery bellies.

The maximum length of this saltwater subspecies is 11 cm (4.3 in).

This subspecies migrates from the nearshore ocean to brackish estuaries and to fresh water streams and rivers to spawn. During breeding season, males develop nuptial colors. The head becomes reddish, eyes blue, the dorsal side becomes a shining greenish-blue-black, and the ventral side, orange-red from nose to vent and up the sides. They establish territories, become solitary, and much more aggressive. The top of the back of female bodies turns brownish with transverse bands while the entire rest of the body turns reddish.

These fish leave the ocean to enter brachish water or freshwater streams to spawn, usually from April to July. The male builds about a 2.5cm (1 in) in diameter, barrel-shaped nest of fragments of aquatic plants, strands of algae, twigs, and debris in a sheltered spot. After cementing the materials together with mucous threads he spins from his kidneys, he makes small holes for an exit and entrance. He weights the nest down with pebbles. During the nest building process, he aggressively defends the nest against other males and not as yet welcome females.

Courtship begins when the nest is ready. When a female carrying eggs enters his territory, he swims near her in a zigzag dancing movement. If the female is attracted to him, she follows him to his nest where he entices her it to enter it by thrusting his snout into the entrance. Entering, she deposits 100 to 150 eggs in the central cavity. After the male has driven her from the nest, he fertilizes the eggs. He may entice a succession of females into his nest.

Over a 6 to 10 day incubation, the male takes care of the nest, cleaning and guarding it, and periodically doing a headstand to fan the eggs to aerate them. He may also use his mouth to clean the eggs. When it is close to the time for the eggs to hatch, he tears down the nest so the eggs break apart and scatter. After the eggs hatch, he tries to keep the fry close to the nest for protection.

The spines of these pugnacious fish are effective weapons used both in offense and defense against intruders or predators, often against fishes much larger than themselves. Threespined sticklebacks assume a threatening posture. They rush forward with raised dorsal spines and a wide, gaping mouth. If the intruder is not intimidated, sticklebacks becomes very still, point their head down, and jerk their body as if to bore a hole in the ground below. This display seems to be effective in driving intruders away.

Sticklebacks are one of the most studied fishes by ichthyologists and behaviorists. Some researchers believe that the two lineages of marine and freshwater are an example of evolution in action since records indicate their adaptations have occurred in only the past 10 years.

Pollution and loss of spawning habitat as a result of development may impact population density. At the present time a California freshwater subspecies, the unarmored threespine stickleback (G. a. williamsoni) is listed as endangered by the U.S. Fish and Wildlife Service.

The threespine stickleback is the only one of the three subspecies of Gasterosteus aculeatus that is marine, scaleless, and fully plated. Fish in this species are anadramous, living in the ocean but entering brackish water or ascending freshwater streams to spawn. The male threespine stickleback not only builds the nest, he also guards it, takes care of the eggs, and protects the newly hatched larvae.