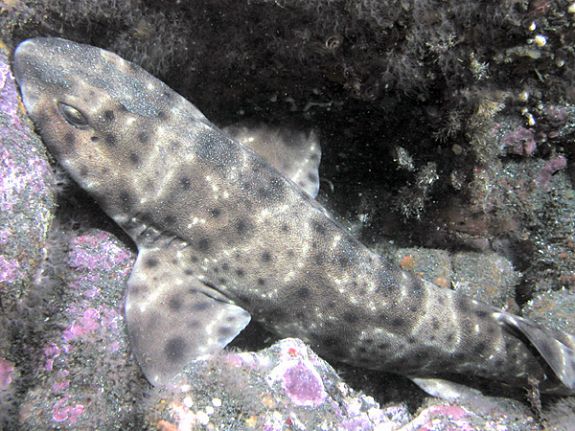 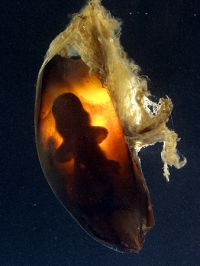 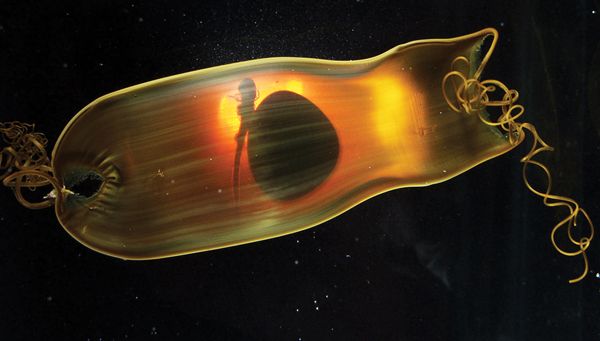 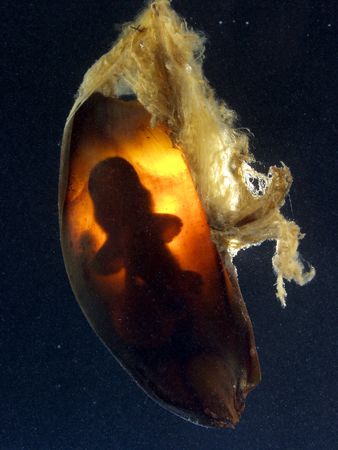 Eastern Pacific Ocean from central California to southern Mexico, including the Gulf of California. There is also a population along the coast of central Chile that some believe is a separate species.

Swell sharks are found in marine waters of temperate to subtropical temperatures where they prefer a boulder and rocky reef type substrate with liberal growths of algae, especially kelp. Although this species has been reported to a water depth of 457 m (1499 ft), it is most commonly found in water 5 to 37 m (16.4 to 121.4 ft) deep. Well-camouflaged, they frequent caves, shallow rock crevices, and crevices around kelp forests.

The swell shark is relatively easy to identify. A sturdy body tapers into a somewhat slender tail. The snout is short and rounded. This fish has a large mouth.The mouth that appears to be grinning contains upper and lower jaws that both have 55 to 60 similarly shaped, small, sharp, pointy teeth. The eyes of the swell shark are medium sized with a lower nictitating membrane and a small spiracle immediately posterior. The two close together small dorsal fins are well back on the body and opposed on the ventral aspect by the pelvic and anal fins. The caudal fin is sturdy, with a distinct sub-terminal notch.The body is covered with large spiky denticles.

Alternating bands of tan and brown form the base colors for this fish. The bands in some specimens may be broken into a reticulate pattern. There are numerous light, almost white, and dark brown spots thickly scattered over the whole body and fins.

Swell sharks are nocturnal feeders and are not normally seen engaged in feeding activity during daylight hours. Their primary food source consists of small fish, either alive or dead, and a variety of molluscs and crustaceans. They are not adept swimmers and do not commonly pursue prey, preferring to wait until food items come to them, When a meal is within range, they suck the item into their large mouths. They have been observed lying on sandy bottoms open mouthed apparently hoping that something worth eating will come along and find its way into the ready receptacle.

This species is oviparous, that is, eggs produced by the female protect and nourish an embryo until it grows to term and hatches. Fertilization is internal, but little is known about the mating ritual of swell sharks. After mating, two greenish amber eggs are deposited and become attached, often with the aid of the mother, to substrate items such as rocks and algae, via wiry tendrils of egg case material at the corners of the egg case. A large yolk, attached to the embryo by way of a yolk stalk, provides nutrition to the embryo during the gestation period, which averages 9-12 months and is, in degree, dependent on water temperature.

When the pup is ready for hatching, it has developed oversized denticles along its back which aid in the hatching process. Pups average about 15 cm (6 in) in length when born and are fully independent and ready to feed. They receive no parental care.

Poor swimmers, these fish tend to lead a rather sedentary life style. Their daytime hours are spent resting, while hiding in crevices, caves, holes, and under overhangs where they sometimes stack on top of each other like cordwood.

Their solitary feeding activities take place during night hours and are rather passive in nature as these animals prefer to let food come to them, rather than chasing after it.

As with most sharks this species adapts well to its mode of life. Good vision, especially for its nocturnal activities, sensitive olfactory abilities, and sensitivity to minute electric fields created by other animals provide it with the potential for food gathering and protective activities. Its coloration and marking patterns provide excellent camouflage to hide it from predators.

The IUCN Red List lists the swell shark as a species of Least Concern.

Swell sharks, young and old, are subject to predation by larger fish, including some other shark species. They are also food objects for seals and sea lions.Most people do not consider these fish fit to eat nor are they considered sport fish. They are rarely targeted by anglers, but are commonly taken accidentally as bycatch by some fisheries such as gillnets, crab and lobster traps, and trawls.

Swell sharks are harmless unless handled or provoked.

Swell sharks have a defensive mechanism that is resorted to if seriously threatened. A shark that feels a need for protection curves its body into a “U” shape by taking its tail into its mouth, and pumps water or air into its stomach. It can inflate or swell to about twice its natural size, which might lock it into a nook or cranny or increase its size enough to deter a would-be predator. When the danger is past, the swell shark makes a bark-like noise and expels the air or water, returning to its natural size. This behavior is the basis for the swell shark’s common name.

Swell sharks are relatively small, inactive sharks, fairly common to Southern California waters. The common name is based on their ability, when threatened, to engorge the stomach with water or air to about twice its natural size. Commonly found in kelp forests with rocky substrates where their drab color allows them to blend into the background. Generally shy and harmless unless aggressively threatened, these sharks attempt to stay clear of divers and snorkelers. Swell sharks are harmless unless handled or provoked.