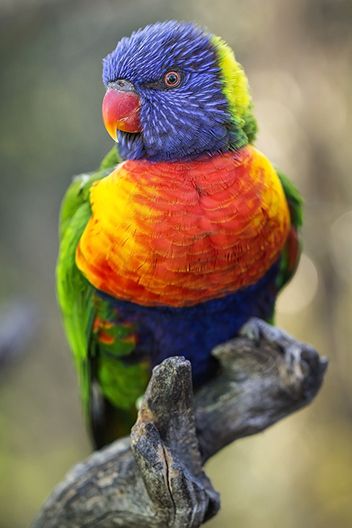 One of our Swainson's Lorikeets | Used with permission of Robin Riggs

Our lorikeets either came from the Aquarium’s breeding program or from U.S. captive breeding programs. None have been imported. All our lorikeets including Swainson’s have distinctive personalities and even respond to the names given them by the aviculturists who feed and nurture them.

Northeast to southeast Australia and northern Tasmania with an isolated population in Perth, Western Australia. The range is gradually increasing.

Swainson’s Lorikeets inhabit a wide variety of habitats, limited only by the availability of food. Normally lowland birds, they are found in scrub, open eucalyptus forests, rainforests, gardens and parks, and coconut groves. They can also be found in mountainous areas of Queensland and New South Wales (such as the Blue Mountains near Sydney, hence the name Blue Mountain Lorikeet). They are very common in the suburbs of Sydney.

Swainson’s Lorikeets are beautiful birds; in fact, they are often referred to as the “prettiest” of the Rainbow Lorikeets. They have a vibrant blue-to-violet heads with even brighter blue streaking. The collar at the back of the head is greenish-yellow. The breast is a mixture of red and yellow feathers. They have purple-blue , and bright orange breasts edged in yellow. The collar at the nape of their neck is greenish yellow, the under wings marked in orange and yellow, and their backs, upper wings and tails are green. They have orange bills and iris as adults. There is no difference in the appearance of males and females. Immature birds are duller in color with a dark brown-orange beak and iris. More color mutations have appeared in this subspecies of lorikeet than in any other of the lorikeets

Length” to 30 cm (11.8 in)
Weight: to 130 gr (4.6 oz)
Males and females are usually similar is size; however, males living in aviaries and similar protected environments can be slightly larger.

Their diet in the wild consists of pollen and some nectar, seeds, berries, fruits and soft-bodied insects and larvae. They are considered agricultural pests in some parts of their range due to their liking for orchard fruit and soft, unripe grains. They drink surface water and water trapped by leaves

Food is stored in their crop for short periods to be regurgitated to feed themselves, their partners, or their chicks. Because they have immature gizzards, they can only eat soft, non-fibrous foods. Their intestinal tracts are short and soft food is easy and rapidly digested. Since most of the food they eat is low in nutrients, they must eat frequently, and because most of what they eat is regurgitated liquid, they excrete liquid very frequently.

Our lorikeets are fed specially formulated nectar and some fruits.

These lorikeets usually become sexually mature at about two years of age.

It is believed that wild birds form life-long pairs. Courtship is elaborate. It includes wing fluttering to show underwing patterns, head bobbing, tail fanning, sway-walking, and beak-fencing. Edward’s Lorikeets normally nest high in unlined tree hollows. They are very territorial of their nests. In the Aquarium’s aviary they nest in specially designed nest boxes and sometimes in tunnels they dig under rocks and plants. Usually two, but occasionally three eggs are laid that are usually incubated by the female for about 23 days. However, the male may spend a good deal of time in the nest as well.

Chicks are altricial at birth, that is undeveloped and requiring parental care. Fed by their parents, in the wild they remain in the nest for 49-56 days. They become completely independent about 14 days later. In the Aquarium’s breeding program, some chicks are removed from their parents and are hand raised, to accustom them to the presence of people and to teach them to accept nectar from people.

These very busy birds spend a great deal of their time feeding and playing. They are known to fly long distances, in large flocks, along established flight paths, from their roosting sites to feeding sites. Noisy birds, they make a great variety of distinct and different sounds from twittering and chattering to screeching, hissing and clicking

Roosting sites may contain several hundred birds. The reasons for the large colonies is believed to be for sharing information about food resources, the security of numbers, or as a place for young birds to learn to find and eat different types of food.

The feet of these birds have two forward and two backward-facing toes. These, combined with their strong beaks, enable them to be excellent climbers, to hang upside-down, and in general to perform an astonishing array of acrobatics, especially while feeding.

Lorikeets do not have oil glands but instead preen using powder down. Special feathers with tips that constantly break down form a waxy powder that the birds spread through their plumage during preening.

Swainson’s Lorikeets are not considered to be in danger. In Perth, Western Australia they are officially listed as a pest because of their appetite for agricultural crops in the area. Export of these birds from Australia is prohibited without a special permit from the government.

It is believed that a Swainson’s Lorikeet was the first Australian bird to be painted by an artist. The painting was done in London in 1772. A preserved specimen brought back to England aboard Captain Cook’s 1771 exploratory voyage of the South Pacific was used as the model.

Our lorikeets either came from the Aquarium’s breeding program or from U.S. captive breeding programs. None have been imported. All our lorikeets including Swainson’s have distinctive personalities and even respond to the names given them by the aviculturists who feed and nurture them.