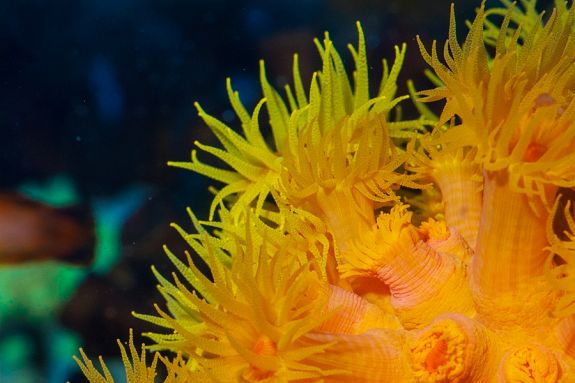 | Andrew Reitsma / Aquarium of the Pacific

Sun corals are on display in the Deep Water exhibit in the Tropical Pacific Gallery.

While they are native to the Indo-Pacific region, sun corals are an invasive species that has been introduced to all continents around the world, except Antarctica.

Sun corals can be found in shallow or deep water, cold or warm water. They are often found in many places too deep or dark for standard coral, such as shipwrecks, caves, and artificial structures. They can be found in waters deeper than 200 feet (61 meters). As they need to catch their own food, they require a strong water flow to allow for filter feeding.

Sun corals generally have an orange base and orange body with translucent yellow tentacles. They live in a colony with multiple polyps connected by a shared tissue base. They are a large-polyp stony coral that creates its own calcareous skeleton covered in corallites, which houses the polyps connected by a thin membrane. When not actively feeding, the polyps are closed up.

Sun corals feed on zooplankton in the wild, but will accept mysid and brine shrimp, as well as bits of fish, clam, and other marine proteins in an aquarium setting.

Sun corals reach reproductive age at around 1.5 years and have several different ways to reproduce. First, the parent colony can produce a new polyp bud, which can break away and form a new colony. Second, sun corals are hermaphroditic and can reproduce both sexually and asexually by releasing larvae into the water column, which will eventually settle as polyps that will create new colonies. Lastly, colonies can create runners (a thin tissue with no polyps) that grow away from the colony until they reach an unoccupied area to start growing polyps. While not a form of reproduction, a polyp can “bail” from its current colony under stressed conditions to settle down in another location.

Sun corals generally extend their tentacles only at night, but can be coaxed to extend them when they sense food in an aquarium setting. They are very susceptible to damage caused by algae; if algae grows on the coral, it will slowly die. As algae prefers light, the sun corals have an advantage by living in dark areas away from algae and other encroaching coral.

Tubastraea coccinea is able to be successfully grown on artificial surfaces, which has allowed it to attach to platforms such as oil rigs and boats. This has allowed the sun coral to become an invasive species worldwide.

This species has not evaluated by the International Union for Conservation of Nature. Considered an invasive species, this coral is displacing native corals and sponges. Some studies have shown that this coral uses chemical defenses to prevent predation and other invertebrates from settling near it. There is also a removal program in Brazil called Projeto Coral-Sol to physically remove the invasive species.

A non-reef building coral, sun corals are also known by names such as orange sun coral, orange cup coral, sunflower coral, and sun polyps. These stony coral polyps are notable for their beautiful orange and yellow coloration. Sun corals are also unique in that they can live without sunlight. Most corals contain the symbiotic algae zooxanthellae, which use photosynthesis to turn sunlight into food for corals. Sun coral does not contain zooxanthellae, so it must catch all of its food using its long tentacles. Sun corals eat zooplankton, generally extending their tentacles at night to feed.