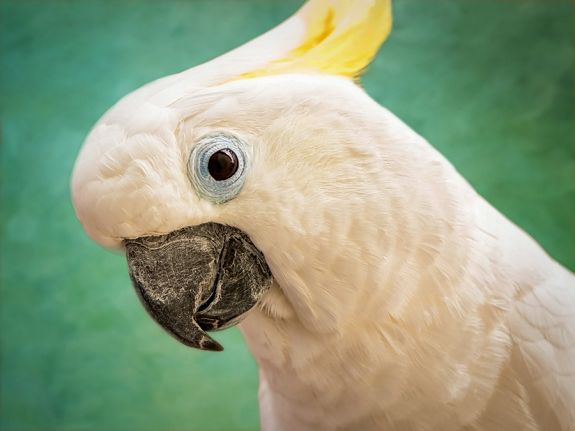 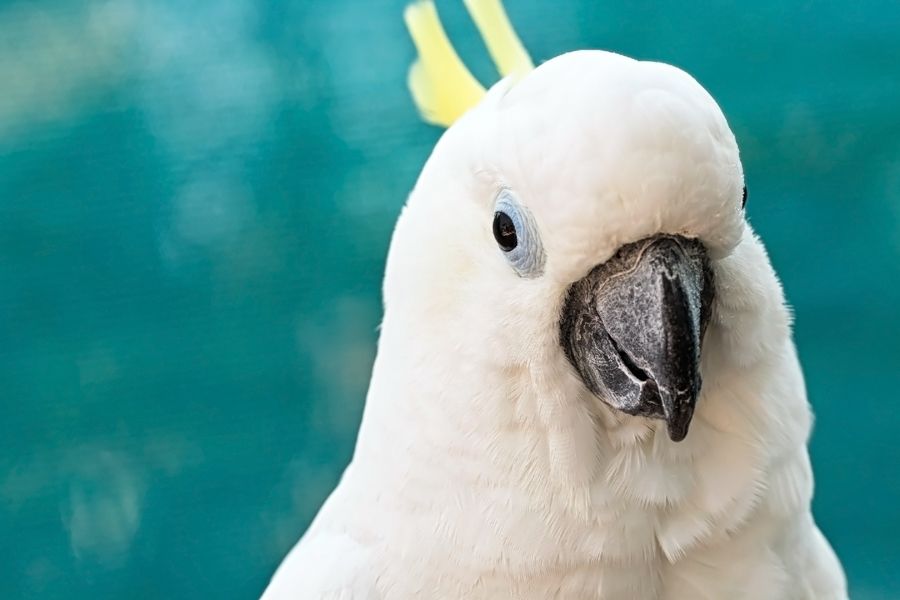 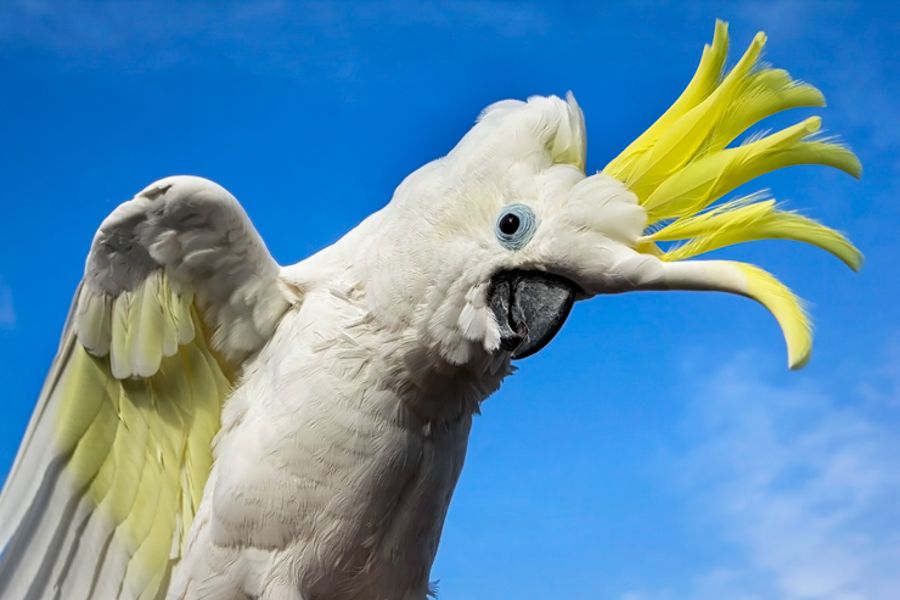 The Aquarium’s sulphur-crested cockatoo Lola (a male) is one of the ambassador animals that participate in meet-and-greets at various locations around the Aquarium, including regular appearances at the Pacific Visions entrance.

This species is found in Australia, Tasmania, New Guinea, and nearby islands. It has been introduced in New Zealand, Palau, and Singapore.

Sulphur-crested cockatoos live in tropical and subtropical rainforests and savanna areas. It can also be found in urban and suburban areas in parks and gardens.

This large white bird has a distinctive sulphur yellow-colored crest that may be erected or folded down on the top of their head. Its feathers are pale yellow under the wings and on the tail. Males and females are similar in appearance. Males have darker brown eyes and females have red tinted brown eyes.

These birds will feed on the ground and in trees, eating mainly nuts, fruits, seeds, blossoms, insects, and insect larvae. They will also eat newly planted and ripening grain crops.

This species reaches reproductive maturity at three to four years of age and breeds once a year in Australia. In northern Australia the breeding season is from May to September, and in southern Australia from August to January. They are monogamous. The courtship ritual includes crest raising, head bobbing, and moving the head from side to side in a figure eight pattern while uttering soft chattering sounds. The birds typically preen each other’s feathers prior to mating. This species competes with other birds for nesting sites generally in a high tree hollow. Typically a bed of wood chips makes up their nest. Incubation of their clutch of two to three eggs lasts from twenty-five to twenty-seven days, with both parents sharing incubation duties and raising the nestlings for the next nine to twelve weeks. The young fledglings will remain with their parents for a number of months after fledging. Little information is known about mating in areas other than Australia.

These birds are most active immediately following sunrise. Even though they may travel long distances to forage, they return to the same roosting area at night. They are very noisy birds, with a loud raucous call that can be heard for long distances. They are also intelligent and very curious. Large groups of birds will feed on the ground with sentinel birds in high trees taking turns acting as lookouts for predators. If a predator is detected, they let out a deafening warning call.

This species’ average lifespan in the wild is forty years. Sulphur-crested cockatoos can live up to 100 years in captivity.

It is no longer legal to import this bird into the United States, according to the Wild Bird Conservation Act.

This species is listed as Least Concern by IUCN and under Cites Appendix 11.

Sulphur-crested cockatoos are large birds native to Australia and nearby islands. They are white in color with a distinctive sulphur-yellow crest. The bird can hold this crest erect or folded down on the top of its head. A social species, these cockatoos often form flocks of a dozen to several hundred birds and have a very loud call that can travel long distances. They can live to 100 or more years. The International Union for Conservation of Nature (IUCN) lists this as a species of Least Concern.