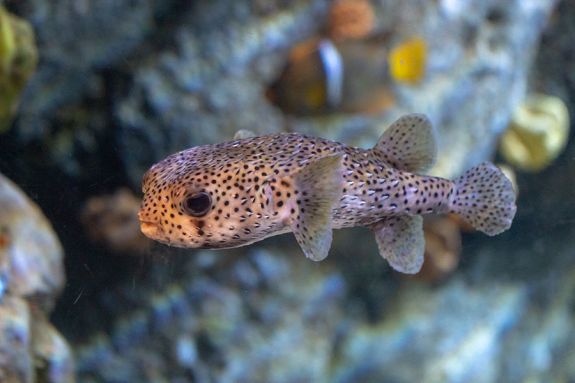 | Alice Hsieh/Aquarium of the Pacific

The Aquarium’s spotfin porcupinefish lives in the Gulf of California exhibit in the Southern California/Baja Gallery on the second floor.

These fish are found in the eastern Pacific from San Diego, California, to Chile, including the Galapagos Islands; in the western Atlantic from Massachusetts to Bermuda, and in the northern Gulf of Mexico to Brazil. They also live in the western Indian Ocean, from the Red Sea to Madagascar, Mauritius, and Reunion.

These fish are typically found around lagoon and seaward reefs and in holes and caves in shallow reefs.

Spotfin porcupinefish have a thin, round, expandable body with small fins. The body is covered in long spines that lie flat against their body when it isn’t inflated. When inflated, the spines stand out away from their body. There are approximately twenty spines nearly in a row between the snout and dorsal fin. While these fish lack pelvic fins, their rounded anal and dorsal fins are near the caudal fin. Typically, they have a dull brown, grayish tan to green body color covered in small dark spots or makings. A dusky ring surrounds their pale belly. They have strong jaws with teeth fused together. There is a slight difference between male and female color and body shape.

These fish breed once a year, typically between May and August. They are broadcast spawners. A female with ripe eggs is will be pursued by multiple males, bringing her to the surface where she will release her eggs. All of the males will then fertilize the eggs. The eggs typically hatch five days after fertilization. On the first two days, the larvae live off of the yolk still attached to them. After that they have fully functional eyes and mouths. Their body color is mainly orange. Larvae have a thin shell until they are approximately 10 days old, when they will metamorphose into spiny juveniles. Teeth, fins, and fin rays are formed within three weeks of hatching. The juveniles are brown to olive green in color, helping to camouflage them in their seaweed hiding places.

The porcupinefish has a nocturnal solitary lifestyle, spending most of its time resting near the ocean floor in shallow waters.

The spotfin porcupinefish has teeth that are fused into a single beak-like structure capable of cracking shells of snails and sea urchins and tearing the limbs from crabs.

When threatened, the fish will inhale large amounts of water to “puff up” and make itself two to three times larger and sticking out their spines to deter predators.

The skin, liver, intestines, and gonads contain large amounts of tetrodotoxin, one of most potent neurotoxins in nature. Ingesting it can cause nausea, numbness, and muscle weakness with mild exposure and in severe cases even death.

Spotfin porcupinefish live for approximately ten years in the wild.

This species has not been evaluated by IUCN.

A typically bashful fish, the spotfin porcupinefish has an expandable thin body covered in spines. When threatened, they swallow water to make themselves much larger. As they enlarge, the spines become erect, which makes the fish appear unappetizing to a predator. Its internal organs are extremely toxic. Their flesh is eaten as a type of sushi called fugu, which may result in fugu poisoning. This fish is not evaluated by the International Union for Conservation of Nature (IUCN).