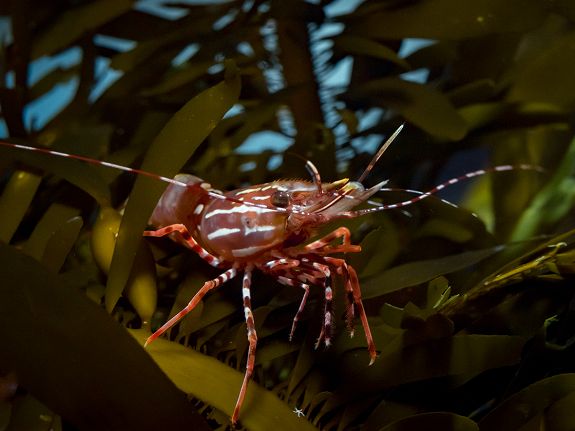 Northeast Pacific from San Diego, California to Unalaska Island, Alaska, and in the Sea of Japan to the Korean Strait.

This species is found at depths of intertidal to 485 meters (1,600 feet); however they are usually well below the intertidal zone. Adults inhabit deep rocky or sandy bottom areas of the ocean, while juveniles are usually bottom dwellers. Though they are found in different depths.

Spot prawn have a body configuration similar to most crustaceans. They have five pairs of swimming legs (pleopods), five pairs of walking legs (pereopods), the front pair of which has claws, and numerous pairs of head appendages. The second pair of pereopods of these invertebrates have a feature that distinguishes this spot prawn species. The left one of the pair is longer than the right one. T, their external skeleton or shell is molted periodically to enable them to grow. The front part of the exoskeleton is called the carapace. It covers the head and protects the prawn’s vital organs. There is a long, serrated spike called the rostrum on top of the front of the carapace.

Reddish in color, this species has longitudinal white stripes on the carapace and distinctive white spots on the sides of the first and fifth abdominal segments. Their pereopods and antennae are banded dark red and lighter red or white. Juveniles may be red, brown, or green. The abdomens of juveniles are smooth and shiny while the carapace is covered with a fuzzy layer of short, fine hair.

Spot prawns are carnivores that feed on smaller live organisms and are also scavengers on dead, decaying organisms. Their primary diet includes worms, algae, small mollusks, sponges, and other shrimp.

Breeding occurs in late October. Before fertilization, the female spot prawn molts. Her new shell is structured to be able to brood her eggs on her abdomen. She attaches the eggs to her body with hair like structures called setae. She broods the eggs for four to five months with hatching usually occurring in March or April. The planktonic larval stage lasts for about three month when they settle to the bottom to become juveniles.

Juveniles feed in shallow water during summer. In their second fall, the carapace of a juvenile lengthens to 2.8 centimeters (7 inches) and they become males. They stay males until their carapaces grow to 3.3 centimeters (8.4 inches) in length. When this growth occurs, the males all become females. Females may mate only once and die while males may mate several times.

Spot prawns migrate vertically at sundown to mate and to find prey, returning to deeper ocean waters for safety when the sun rises.

They can use the muscular tail or abdomen as an escape mechanism in sudden backwards-directed flicks, but the usual method of locomotion is their swimming legs. Spot prawns spend a great deal of time buried in the seafloor’s bottom sediments. To help them breathe, some of their head appendages can be joined together to form a funnel. Oxygen-containing water is drawn down this funnel and over the gills enabling the prawn to breathe while buried in the sediment.

There is evidence that spot prawns, like some other crustaceans, may change color depending on growth, habitat coloration, and time of day. This color change is due to color pigments in tiny, specialized cells called chromatophores in the skin of the prawns.

Males may live to 4-5 years of age. Females are believed to die after brooding eggs once.

Changes in ocean chemistry, (ocean acidification), may be affecting the availability of the calcium needed by organism such as crustaceans to build shells. Scientists have documented changes in pteropods and oysters and intensive research is being done studying impacts on other shell-builders.

Harvesting of spot prawn for seafood is an important fishing industry on the west coast of North America. Arcording to the Aquarium of the Pacific’s Seafood for the Future, spot prawns are harvested by well-managed pot gear fisheries that produce minimal bycatch and habitat impacts. Most incidental catch is released unharmed or can be legally sold in markets because they are not endangered or threatened species.

In California, the spot prawn fishery is a restricted access trap fishery that is regulated under a tiered permit system and seasonal closures. The tiered permit system limits the number of vessels and traps and sets landing limits according to the tier. California issues a total of 28 permits for the commercial harvest of spot prawns; however, in 2012 there were only 20 active vessels harvesting spot prawns.

Learn more at: Seafood for the Future.

In the low light levels of the deep ocean, red prawn, Acanthephyra pelagica, appears black, making them invisible to potential predators. The deep ocean waters inhabited by this prawn species act as a filter that removes the red component of the color spectrum leaving the blue component. The combination of the red coloration of the prawn and blue light in very deep waters makes the prawn appear black and therefore invisible to most other marine life that cannot “see” red.

Panda us platyceros, is the largest species of shrimp found in ocean waters off the west coast of the United States. All these prawn are males during the first few years of life and all change to females. They do a nightly vertical migration to shallower waters at night to find prey, returning to deeper water at sunrise to hide from predators. They also migrate seasonally to breed.