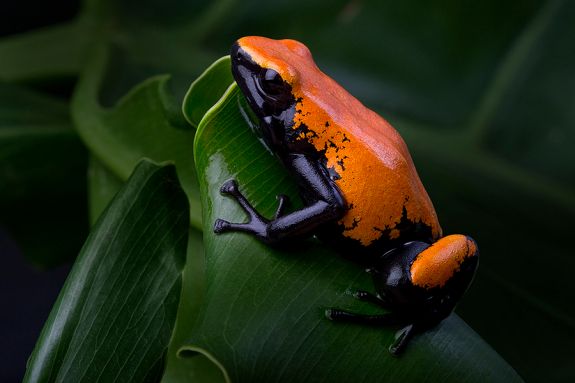 Look for this species in the middle tree cylinder in the FROGS: Dazzling and Disappearing exhibit in the Tropical Pacific Gallery. Our aquarists have provided them with a habitat that is as close as possible to that of their wild counterparts—humid, warm, and dark.

Found in northern and northeastern areas of Brazil in states of Para’, Maranhao, and Tocantins.

This terrestrial frog lives in leaf litter on the forest floor.

This showy, medium-sized frog is shiny black in color with orange, yellow, or red “splashed” on its back. Their coloration depends on their location within their range. Red coloration may vary from bright red to wine colored. Some may have two or more colors “splashed” on their backs. Others may have light blue or whitish color on their back. Those that are all whitish are known as “moonshine”. The underside is black and toe pads are enlarged.

These frogs average 1.7 inches (4.3 cm) in size. Females are slightly larger than males.

They feed primarily on insects.

These frogs are sexually mature at about eight months, with breeding typically taking place when the frogs are at least a year old. Males use their low, sustained buzzing vocalization to attract females to a deposit site where she will lay her eggs to be fertilized by the male. In approximately two weeks, the four to eight eggs will hatch into tadpoles. These tadpoles will be transported to a pool of water by the male. After sixty to ninety days, the tadpoles will metamorphose into adult frogs.

These poison dart frogs are mainly active during early morning or late afternoon hours. Known as climbers, they may be found in the dense rainforest understory.

Their bright coloration serves as a warning to predators not to eat them.

While their lifespan in the wild is unknown, these frogs can live twelve or more years in captivity.

Splashback poison dart frogs are listed as a species of Least Concern by IUCN. This frog is currently abundant in its area, but may be affected by habitat loss, deforestation, and flooding from dams.

This showy, medium-sized frog derives its name from the irregular, brightly colored pattern “splashed” on its back. This terrestrial frog is found in the rainforests of Brazil. It has many variants (morphs) classified by the percentage of color covering their backs. The frog on display at the Aquarium is an orange morph. Though listed as a species of Least Concern by International Union for Conservation of Nature (IUCN), this frog is threatened by habitat loss, including deforestation and flooding caused by dams in the area.