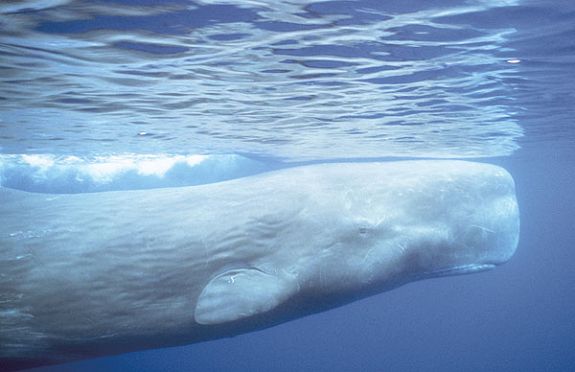 Due to the space requirements for these intelligent and dynamic animals, we do not exhibit live whales or dolphins. The sperm whale is featured in Whales: Voices in the Sea, an interactive kiosk.

World wide in both hemispheres from tropical to polar ice-free waters. In the U.S. Hawaii and California north to the Bering Sea and Maine to the Gulf of Mexico.

These pelagic whales are found in areas of the ocean close to the edge of the continental shelf in water that is at least 200 m (655 ft) deep, but preferably much deeper. They venture close to shore only where there is deep water and prey.

The large boxlike head of sperm whales has a blunt snout that may extend 1.5 m (5 ft) beyond the tip of the lower jaw. The skull contains the largest brain of any animal in the world weighing as much as six times that of a human’s brain. The head of an adult male is often heavily marked with circular scars from encounters with squid suckers. The single S-shaped blowhole is located forward on the head and off center to the left, a placement that gives this whale a distinctive blow that projects forward and to the left at a 45o angle instead of straight up. The short broad flippers have rounded tips and are about 1.5 m (5 ft) long. The squat dorsal fin, actually no more than a large bump, is about two thirds of the body length back from the nose and there is a series of small knuckles or bumps along the spine from the fin to the flukes. Most females and some immature males have roughened callous-like patches on the dorsal fin which adult males do not have. The large, triangular-shaped flukes can measure as much as five m (16 ft) wide, the widest of all the cetaceans.

The lower jaw is long, narrow, underslung, and very small compared to the rest of the head. Males usually have 22 to 25 curved, conical-shaped, functional teeth on each side of the lower jaw that are 7.6 to 20 cm (3-8 in) long. The upper jaw contains a series of sockets into which the lower teeth fit. Males may also have a few tiny, weak, non-functional teeth hidden behind the gums. Females have fewer teeth than males.

The upper body of these whales is dark in color, varying from pale gray to dark gray to a dark blue-black. There are often streaks of lighter colors on the body. In sunlight the body may appear to be brownish. The underside is a lighter color and may have white patches. There are white areas around the mouth. The skin posterior to the head region is wrinkled or prune-like in appearance in contrast to the smooth skin of most whales.

Sperm whales are believed to forage primarily on or near the ocean bottom using their highly developed echolocation to find food in the dark depths. Their main food is large and medium-sized squid and occasionally giant squid, but they are opportunistic feeders and will prey on octopus, skates, crabs, bottom-dwelling sharks, and a variety of fishes such as rockfish, salmon, and cod. They are believed to eat 907 to 2,721 kg (1,999 to 5,999 lb) of food a day. There is evidence that some of the clicking-creaking sounds made by these whales are powerful enough to stun prey.

Female sperm whales become sexually mature between seven and thirteen years. They usually reproduce about every four to five years. Males reach puberty at nine to ten years of age but are probably not high enough in social status in a breeding school to mate until they are 25 to 27 years old.

The breeding season is fairly long extending from January to August in the Northern Hemisphere, and July to March in the Southern Hemisphere. During the breeding season from one to five mature males may associate with a nursery school. They are extremely competitive for the mature females including exhibiting intensive physical aggression against other challenging bulls. At the breeding grounds females have been observed breaching but only in the presence of males, apparently a mating behavior.

Gestation averages about 15 months and calves are most commonly born in temperate and tropical waters in summer and autumn. At birth calves are 3.4-4.9 m (11 to 16 ft) long and weigh about 907 kg (1,999 lb). Calves may start taking solid food before they are a year old; however, they may also continue to nurse until they are three years old or even older. Mothers ecolocate to keep track of their calves.

Anatomical and physiological adaptations enable sperm whales to make these long deep dives. These include a flexible ribcage that enables their lungs to collapse safely under increased water pressure; a large blood volume very high in oxygen- carrying hemoglobin; an increased amount of myoglobin, a protein that stores high levels of oxygen in muscle tissue; and the ability to direct oxygenated blood to areas of critical need such as the brain when oxygen supplies are depleted which is also when metabolism rates decrease. In addition the blubber of sperm whales is 15 to 30 cm (5.9 to 11.8 in) thick. It insulates the whales so they can dive to great depths in water that is just above freezing and allows them to maintain a high core body temperature without losing heat to their surroundings.

Sperm whales are believed to have a life span of 50 to 70 years.

Sperm whales have two natural predators, killer whales and large sharks, but by far, their greatest predators are humans. These cetaceans were once the mainstay of the open ocean whaling industry, especially those in the northeast United States. Sperm whales were killed every year from about 1690-1987, peaking with a kill of 29, 300 in 1963/64. They were mainly killed for the superior oil (obtained from their blubber) which burned brightly and cleanly in oil lamps and was an excellent lubricant for delicate instruments; the spermaceti, a waxy substance from an organ located in the head that when solidified made the finest grade of candles; and ambergris, a material from the lower intestine used in perfume manufacture and literally worth its weight in gold.

The United States banned commercial whaling in 1972 with the adoption of the Marine Mammal Protection Act which is still in force. In 1984 the International Whaling Commission (IWC) placed a moratorium on commercial whaling of sperm whales along with other great whales. The sperm whale is the only toothed whale under the management of the IWC. Now in 2006 there is a concerted effort being made by a number of countries to resume commercial whaling.

The IUCN Red List lists this species as vulnerable while the U.S.’s Endangered Species Act lists sperm whales as endangered. Whalers selectively sought and killed the large breeding age males, upsetting the male-to-female ratio which subsequently caused a decline in the birth rate. Recovery of some populations of sperm whales, particularly in the Southern Hemisphere, is still impacted. Today’s principal threats to sperm whales are entanglement in gill and drift nets set for other species, chemical and debris pollution of the ocean, collisions with ships, and noise pollution from ship engines and military SONAR testing.

Ambergris is a foul smelling, fatty material produced in the lower intestine of some sperm whales apparently in response to irritation from accumulated squid beaks. It was highly prized for its ability to hold the delicate fragrance in expensive perfumes. On contact with air it took on a pleasant, musky odor. Synthetic materials have replaced its use in the perfume industry. Ambergris floats and today ambergris excreted by a sperm whale is occasionally found washed up on beaches. It is still valuable even though replaced by synthetics.

Whale teeth, an art form: Whalers prized sperm whale teeth as a base for an art form called scrimshaw. After extraction from the tough gums, the teeth were filed or scraped smooth and carefully polished with shark skin, pumice, or wood ash followed by engraving with a sharp instrument such as a sail maker’s needle or awl. The design was commonly outlined in black pigment obtained from a mixture of carbon from the bottom of the try pots (blubber rendering pots) and whale grease, or soot or lamp-black and oil. When available, other color pigments such as green and red were occasionally used. President John F. Kennedy was an avid scrimshaw collector.

Spermaceti is a semi-liquid wax like substance found in the spermaceti organ or case in the front of and above the skull of a sperm whale’s head and also in a structure called the junk at the front of the whale’s head above the upper jaw. The junk spermaceti is more solid. Processed spermaceti had many uses: as a very fine lubricating oil for delicate instruments, additive in motor oils and rust-proofing materials, in many pharmaceutical compounds, manufacture of high quality, smokeless candles, and later as a base for cosmetics, etc. The exact function of the spermaceti-filled organs is still not known. It may be an aid in controlling buoyancy or in echolocation, or as a battering ram for use in fights with other males.

Largest of the toothed whales, the deep-diving sperm whale is also the largest toothed animal in the world. The species name, macrocephalus, Greek for “big head”, describes one identifying characteristic of this whale. The male’s head is typically about one third its total body length (e.g., 5.2 m (17 ft) in a 15.4 m (51 ft) long male). The common name was derived from a milky-white substance called spermaceti contained in an organ in the whales’ head which was though to contain sperm. The size of the whale’s head is attributed to the size of this organ that can weigh 13.6 tonnes (15 tons) and contain 3.6 tonnes (4 tons) of oil.