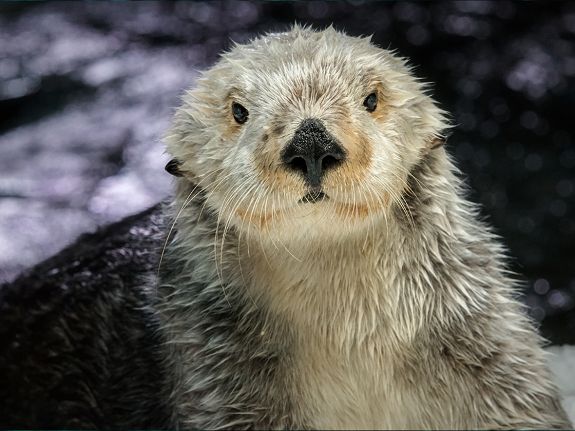 Our sea otters are all rescued animals that could not be returned to the wild after being nursed back to health. The Sea Otter Habitat is located in the Northern Pacific Gallery.

Distribution is dependent on the geographic location of the subspecies. Southern sea otter: along the coast of northern California just south of San Francisco to Santa Barbara County in central California; Northern sea otter:: along Alaska’s Aleutian Island chain (native) to Prince William Sound and south to Oregon; Asian sea otter: Kuril Islands and along the eastern coast of the Kamchatka Peninsula.

These coastal animals spend almost their entire life at sea and most of the time on the water’s surface. They typically stay within 1-2 km (0.6-1.2 mi) from shore in primarily shallow waters that are protected from coastal winds, have rocky bottoms, and are 15 to 23 m (50 to 75 ft) deep. They usually have a coastal home range of 8 to 16 km (5 to 10 mi).

Reproductive females and territorial males are mostly found in kelp-dominated regions while juveniles and non-territorial males occupy sandy habitats. They occasionally haul out onto land to rest. In kelp they are camouflaged; find food; can wrap themselves in the kelp to remain stationary; and find protection from strong winds and waves.

Recent research using tracking with GIS supplemented by historic data sets has indicated that the foraging and migratory ranges for southern sea otters are about 603 km (375 mi) from the Gaviota coast in Santa Barbara County to Half Moon Bay in San Mateo County. Males mostly occupy and forage in the waters of the southern and northern boundaries and females and their offspring in the central coastal range.

Sea otters have a narrow skull with a wide rostrum and long nasal bones. They have pronounced canine teeth. Their facial vibrissae (whiskers) may reach 10.2 cm (4 in) in length but are usually worn down to about 5 cm (2 in). Their dexterous front paws have retractile claws while the claws on their flat, webbed hind feet that act as flippers do not retract. They have a flat, blunt tail that can be about one-fourth their total body length.

An otter’s dense fur can be brown, black, blonde, and even silver in coloration and facial hair may turn white with age.

Sea otters have a high metabolism and need to eat large amounts of food in order to keep warm in their cold water habitat. In the ocean, sea otters eat 25 to 30 percent of their body weight each day.

The diet preferences of otters varies but most sea otters eat only two or three types of food. Otters mostly feed on invertebrates such as sea urchins, squid, octopus, crabs, mussels, abalone and other mollusks usually in waters less than 25 m (82.5 ft) deep. Sometimes they eat birds. Female otters frequently pass on their preference for certain food items to their offspring.

Females become sexually mature at three to four years of age and males at four to five. They breed in the water throughout the year. Mating may appear violent when the male will grab the female from behind, clamp his jaws on her head, neck, or nose and upper jaw. The pair thrashes and rolls with the females head under water most of the time. Mating can last up to 20 minutes.

Females give birth about every other year. Gestation is approximately six to nine months, depending on the time of implantation of the egg in the uterus. Pups are born in the water and weigh 1.4 to 2.3 kg (3 to 5 lb) at birth. They are covered with shaggy yellowish to light brownish colored fur, called lanugo. Their eyes are open. They have the ability to float but cannot dive because of their buoyancy. A pup is very dependent on its mother. She nurses and grooms the pup while she swims on her back and supports the pup on her chest. The pup is nursed for two to three months on milk containing 20 to 25 percent fat and starts to eat bits of solid food at about six to eight weeks. While the female hunts for food she may often place the pup on top of kelp, wrapped in strands to keep it from drifting.

At six months of age, sea otters are able to care for themselves. Young males leave to find a bachelor group while females will remain in the area in which they were raised.

Extensive observations made by researchers at USGS’s Western Ecological Research Center have shown that, depending on population status and food availability, southern sea otters usually spend 40 to 50 percent of the time resting, about 10 percent grooming, 2 to 20 percent interacting, 1-5 percent traveling, and 20 to 40 percent feeding.

Southern sea otters are well adapted for life in the water but they walk slowly and are quite awkward on land. They often lie on their backs and move by paddling their hind legs, traveling only about 1.6 km (1 mile) an hour. While swimming underwater, they close their ears and tuck their front limbs tight to their bodies and move using their hind limbs and tail in an up-and-down motion. They dive to 36.6 m (120 ft) below the surface, usually in search of food. Dives usually last under a minute, but can last up to four minutes. They feed and groom for most of the day, taking a 2-4 hour rest in the middle of the day. They usually sleep or rest through the night on their backs in the water. When resting, sea otters sometimes tie themselves with kelp fronds to keep from drifting.

Sea otters are social animals that live in groups of 12 to 100+ called rafts. These rafts are made up of either males or females and their young. Otters may play with one another, rarely fight, and usually ignore other marine mammal species.

Lacking blubber, sea otters rely on dense, fine, short insulating underfur and coarse outer guard hairs to aid in heat conservation and to keep warm. Because their fur is crucial to their health and survival, a sea otter has to spend a portion of its day grooming. Using its sharp claws as a comb, the otter scratches and brushes its fur to untangle and clean it. Its loosely jointed skeleton allows it to twist, roll, and squirm to reach every part of its fur, even on its back. It also has the advantage of a coat that is so loose, it can be pulled around to clean areas that are hard to reach. In this grooming process a layer of insulating air bubbles is trapped between the otter’s warm skin and the cold water. This shield of trapped air is the otter’s primary defense against heat loss. The otter rubs hard with its paws to trap the air next to its skin. It may also blow air into its coat.

Having a constant need to stay warm in water temperatures that can range between 1.7o and 15.6o C (35o and 60o F), sea otters do not shed their hairs seasonally. They lose a few old hairs at a time and grow replacements throughout the year.

Otters eat at the surface of the water. As food items are found, usually on the ocean bottom, otters maximize their dive time by stashing their catch in loose folds of skin under their forelimbs that form hidden “pouches”. The more food that can be gathered per dive, the less energy is wasted. Sea otters are one of the few animals known to use tools. Rocks, broken shells, and other objects are used for breaking, prying loose and smashing open a food item.

The outer fur hairs cling together when wet, maintaining a thin outer layer that keeps the underfur and the skin dry. The outer fur has an oil coating which also repels water. The fur of the sea otter is believed to be the most fine and dense fur of any animal. There may be up to one million hairs in one square inch of sea otter fur.

Humans are the primary source of the rising nonpoint pollution levels in California’s coastal waters. Pollution from agricultural and urban runoff and industrial and municipal discharges are believed to be causative factors in the very slow to stagnant population growth of southern otters. Runoff from the land that enters the marine environment contains chemicals, sediments, excess nutrients, and other contaminants harmful to these marine animals. In addition animal waste from land animals such as raccoons, possums, and domestic and feral cats can contain bacteria, parasites, and viruses that cause disease.

Major non-human predators of sea otters include sharks, killer whales, coyotes, brown bears and even eagles. Southern sea otters have been killed illegally because of the belief that they compete with commercial fishers and divers collecting sea urchins commercially.

Predators of sea otters include sharks and killer whales. Sea otters dive or play dead when they sense danger, or may signal alarm by raising a forepaw. The Alaskan subspecies have predators on land such as coyotes or brown bears. Bald eagles have been observed swooping down and grabbing sea otter pups.

“Cautiously optimistic” says Tim Tinker, a research biologist with the U.S. Geological Survey’s Western Ecological Research Center about the recovery of the southern sea otter. His statement is based on the results of the 2013 survey of the sea otter population. The count of 2,882 otters just off the California mainland is an increase of 90 compared to the prior year, up more than 3 percent. However, scientists also are now including a population of previously uncounted otters at San Nicolas Island, bringing the total to 2,941. The survey is conducted annually and uses a three-year average to smooth out variations in counting methods. Once near extinction, the otters’ population must exceed 3,090 for three consecutive years to be considered for removal from a federal threatened species list. .

Sea otters are unique among other animals in the weasel family Mustelidae in that they are able to live their entire life in water, have no functional scent glands, and do not make dens or burrows. At one time researchers suggested that they belonged in the family of earless seals such as the harbor seal.

Sea otters, the smallest and most recently evolved of all marine mammals, are in the family Mustelidae that includes weasels, ferrets, badgers, skunks, freshwater and sea otters, and minks. There are three subspecies: the northern (Alaska) sea otter Enhydralutris kenyoni; the Asian sea otter E. l. lutris; and the southern sea otter E. l. neresis. The genus name, Enhydra, comes from the Greek for “in water”; the species name, lutris , from the Latin word for otters; and the subspecies name of the southern sea otter, neresis, means sea nymph or swimmer.