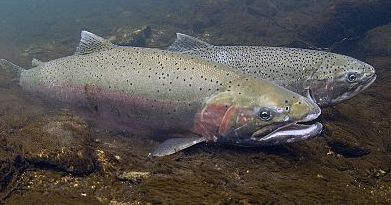 The Southern California Steelhead Story exhibit contains rainbow trout obtained from the California Department of Fish and Wildlife (CDDW) hatchery and may contain steelhead seasonally. The exhibit consists of three habitats utilized by the fish in their life cycle; freshwater upper and middle elevation of the San Gabriel River watershed and brackish water in an estuary at the river mouth..

Rainbow trout are also illustrated on The Wave, a mosaic tile mural in the Rios de la Vida (Rivers of Life) fountain in the Aquarium’s front plaza that tells a graphic story about the watershed of our Los Angeles and San Gabriel Rivers.

Habitat needs vary depending on the time in the life cycle. In the freshwater phase, freely flowing, cool, clean, highly oxygenated water is essential. Eggs are hatched in streams with gravel bottoms. In the first several months of life the small fish tend to prefer shallow areas with rock and boulder bottoms. Juveniles prefer areas with protective debris and will eventually find pools with a variety of hiding places such as tree roots, boulders, and undercut banks. Juveniles ultimately make their way to estuarine waters and to the ocean.

Steelhead have the typical, but perhaps more slender, salmon appearance. A small adipose (fatty) dorsal fin forward of the tail helps to identify them as a salmonid fish.

Color varies relative to geographical area, but in general the body is shiny silver, shading to olive or black on the back. There are small black spots along the side and back above the lateral line, extending onto the large, square tail. During the spawning season the fish exhibit a pink to red horizontal stripe along the sides of the body.

Newly hatched fish derive nutrition from their yolk sac. When this is depleted, they feed on stream-borne prey such as algae and zooplankton, including insect larvae and adults, and other small invertebrate forms. In fresh water the diet of adult steelhead includes a variety of invertebrates, fish eggs, and small minnows. In the ocean, they consume smaller forage fish such as herring, anchovies, and sardines. They also feed on squid, shrimp, and krill. Their ocean diets are much richer nutritionally that their freshwater diet.

Sexually mature adults move from their stay in the ocean to freshwater streams, usually but not always, to headwaters of the watershed where they were hatched. If environmental conditions are not satisfactory, the fish may enter another river or may even skip the spawning season. Time of the spawning run and number vary from one area to another. In Southern California there is a winter run occurring January through March, the period when the area experiences most of its rainfall. In some areas there may be a small spring run of relatively immature fish that wait until the following winter to spawn.

A gravel stream bottom with freshly flowing, well-oxygenated water is the preferred spawning habitat. Using her large broad tail as a fan, the female clears debris from a bottom area to form a depressed, clean gravel nest called a redd. She deposits up to 2,000 eggs in the redd that are immediately fertilized by an accompanying guarding male. The female then moves just upstream of the spawning area and with water pressure from her tail, covers the eggs with fresh, clean gravel. At the same time she is forming another redd. Over a period of several days to a few weeks several redds may be created and up to a total of 12,000 eggs may be deposited.

Egg incubation time is usually three to eight weeks, depends on environmental conditions, primarily temperature. Newly hatched trout, (called alevens or sac fry), stay in the redd for three to four weeks, receiving nutrition from a large yolk sac on the underside of their body. When the yolk sac is depleted, the fry are about 2.54 cm (1 inch) long. They then emerge from the gravel as tiny but fully formed trout and begin to seek prey. Some of these fry will develop into steelhead eventually going to sea and some into rainbow trout that will stay in freshwater habitats. It is estimated that only five to ten percent of hatchlings will survive to adulthood.

Unlike salmon, which die after spawning, steelhead (mostly females), may spawn for two or three seasons.

Although it varies depending on season and spawning time, mature adults may enter the river immediately on reaching its mouth; however, some fish take their time to do so. Small groups usually enter throughout the spawning season: but in drought conditions, waves of fish may enter when rains have restored access.

Research studies have shown that steelhead may swim upriver at rates of three to twenty-four miles per day. The rate is dependent on the physical characteristics of the river that influence how much energy the fish has to expend swimming upstream.

Prior to their entry into the ocean, juveniles undergo a process called “smoltification” that physiologically prepares them for the change from fresh to saltwater. They lose their rainbow trout coloration and become more silvery or steely. The tail becomes more paddle-shaped than forked, a better shape for ocean swimming. The body becomes a more sturdy than streamlined shape and the eyes grow larger. In addition to changes in appearance, physiological changes take place that enable the steelhead tolerate the salty waters of the ocean.

Estimated to be to 11 years.

Steelhead have natural enemies such as predatory birds and other fish species that feed on eggs and small fish, but by far their greatest enemy is humans. Overfishing and coastal development are the major factors that have resulted in the 1996 designation of six of the twelve designated geographical steelhead groups of the west coast states as threatened or endangered under the Endangered Species Act.

Construction of hydroelectric dams blocked fish runs of these anatropous fish. Delimitation of forests for lumber caused excessive runoff that silted some streams and rivers to a point where they were unusable by spawning fishes. The demand for agricultural water increased, changing and decreasing water flow patterns. Habitat degradation from domestic and industrial pollution has also been part of the picture. Unfortunately, none of the problems mentioned have gone away, but have for the most part increased.

In 2012 NOAA published the Southern California Steelhead Recovery Plan, the basis if which is to recover anadmomous steelhead, and ensure the long-term persistence of self-sustaining wild populations from the Santa Maria River to the U.S.-Mexican border, and ultimately remove them from the Endangered Species List.

Today there are small steelhead farms in Nebraska, Maine, and British Columbia.

Steelhead migrating from the ocean to the east and west forks of the San Gabriel River’s tributaries to spawn have to navigate past the industrial and residential development of 15 cities as they swim 60 miles upriver.

Some hatchlings parented by steelhead develop into rainbow trout that will never see the ocean. On the other hand some offspring from rainbow trout will spend most of their lives in the ocean as steelheads.

Steelhead are members of the salmon family that includes all salmon species, trout, and char. Southern California steelhead are the only members of the salmon family native to Southern California. They are anadromous fish, that is, they hatch and live for a part of their life cycle in fresh water, migrate to the ocean where they spend to mature, and return to a freshwater stream, usually the one where they were hatched, to spawn. Unlike their salmon relatives, they usually do not die after spawning.