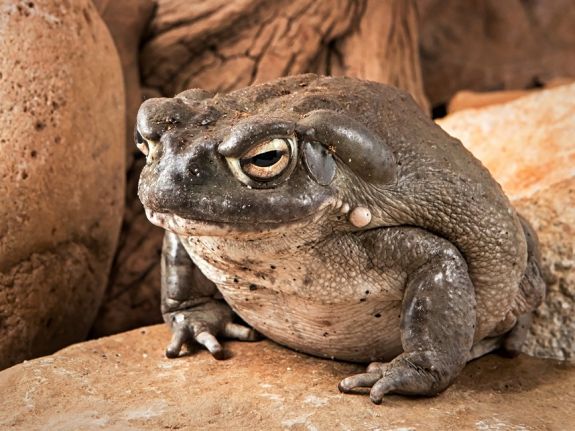 This frog can be found in a variety of arid habitats, including creosote bush-mesquite lowlands and grasslands to groves of sycamore, oak, or walnut trees in mountain canyons and deciduous forests in Mexico. It takes refuge in rodent burrows during extreme heat or cold. It is typically found near permanent water sources, including man-made ditches and canals, but also may be found near temporary water sources such as temporary rain pools.

This large toad’s dorsal color is greenish-gray to dark brown, often with small brownish or orange spots. The ventral side is cream colored. It has fairly smooth skin for a toad, with some warts. It has distinct cranial crest curves above each eye and prominent, elongated parotoid glands on each side of the back of the head and on its hind legs. There is a white bump on each side of its mouth.

Sonoran desert toads feed on spiders, insects, lizards, mice, snails, centipedes, and other amphibians in the wild. At the Aquarium we feed them crickets, horned worms, roaches, and pinky mice.

Mating occurs at night from May to July, mainly during spring and summer rains. Mating may be independent of rainfall where there is a permanent water source available. Males gather at water sources and call to the females with their low-pitched, hoot-like call. When the male is joined by a receptive female, she lays up to 8,000 eggs in a long gelatinous string in the water. Fertilization is external. Tadpoles hatch in two to twelve days and metamorphose into toads in approximately one month.

These nocturnal toads remain underground during the heat or cold of the day, depending on the seasons.

If this toad feels threatened, it secretes a white, milky, liquid hallucinogenic toxin from its parotoid glands under its jaw. If ingested by a predator, it can cause nausea or even death.

This toad’s estimated lifespan is nine years or more in captivity. There have been some wild-caught toads found to be over fifteen years old.

There is no current conservation work regarding this species, but it is listed as endangered by New Mexico’s Department of Fish and Game. This species may be affected by habitat loss and pesticide use.

Sonoran desert toads, also known as Colorado River toads, are the largest North American toads. They have fairly smooth skin for a toad, with few warts. Skin color is typically greenish-gray with a creamy white underside. They have prominent parotoid glands that secrete a potent toxin. They live in the southwestern U.S. and northern Mexican desert.