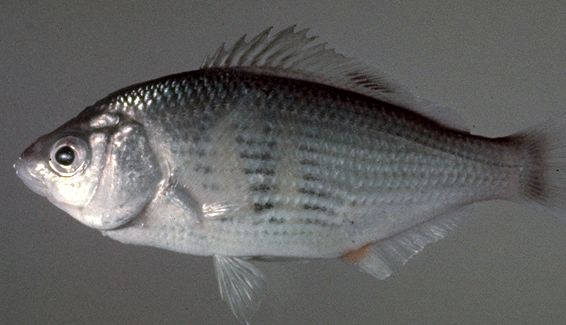 These fish prefer shallow water and are commonly found in bays around eelgrass, oil platforms, pilings of wharfs and piers, and in back waters. They are able to adapt to brackish and fresh water. They are most common in depths from the surf zone to 15 m (50 ft) but do go as deep as 61 m (200 ft).

Shiner surfperch have a strongly compressed, elongate, rather deep body, an upward slanting small mouth, relatively large eyes, and a single continuous dorsal fin with slightly longer spines than the soft rays. Their body is generally silvery with a dusky to greenish back. The scales on the middle of their sides toward their head have back dots on them which form eight longitudinal stripes. Especially in females, these stripes are often interrupted by three pale yellow vertical bands. They often have a dark spot on the lip below the nostril. Their dorsal and caudal fins are usually plain or dusky.

Maximum size of these fish is about 18 cm (7 in). Females grow faster than males and are larger.

Male shiner surfperch reach sexual maturity almost immediately after birth and females when about one year old. However, females can be inseminated soon after birth, carrying the sperm in their ovaries until the time is suitable for fertilization to take place.

Like all other surfperches, shiners are viviparous, that is, they do not lay eggs but bear live young. The male silver surfperch fights off other males when he is doing his courtship dance. Internal fertilization is aided by a thickening in front of the male’s anal fin. This “nipple” is used to transfer milt into the female. The female surfperch stores the male’s sperm in her body until her ova are mature (sometimes up to 6 months). Fertilization then takes place. The eggs are incubated and hatch inside the female’s body. The female continues to carry the developing larvae for nearly 12 months. When she gives birth, the young emerge as fully-developed, miniature replicas of the adults.

In some parts of their coastal range, these fish move onshore-offshore depending on the season, swimming in shallow water in the spring, and moving to deeper water in the fall. They school during the day but seem to disperse at night.

The relatively large size of newborn shiner surfperch improves their chances of survival.

The life span of these fish is about eight years.

The California Department of Fish and Game regulates the fishing season in parts of California and the bag limit for shiner surfperch throughout the state.

Shiner surfperch are probably the number one fish caught by young fishers along the California coast. This fish can live in both salt water and fresh or brackish water found in coastal wetlands.

About sixteen species of surfperch are found in Southern California waters. The most common surfperch found along the California coast, shiner surfperch typically live in loose aggregations in shallow waters of eelgrass beds, around pilings, piers, oil platforms, and in the back waters of bays and sloughs. They are able to tolerate a wide range of salinity. These medium-sized fish are generally silvery colored with a dusky to greenish back. The International Union for Conservation of Nature (IUCN) lists it as a species of Least Concern.