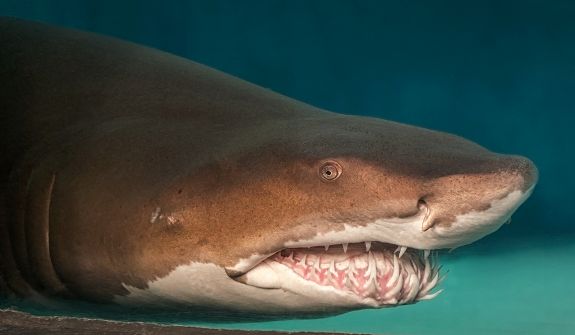 Our sand tiger shark’s habitat is Shark Lagoon. Mahi mahi and sardines laced with vitamins are fed to it by means of a long pole. This feeding technique is called target feeding.

Sand tigers are mainly found in temperate and tropical waters in shallow bays and sandy coastal waters and on rocky or coral reefs to depths from the surf line to about 190 m (625 ft). They spend most of their time near the bottom. In some areas these sharks make seasonal migrations associated with reproduction, moving to warmer waters to give birth.

They are light-brown to gray colored on their upper body gradually fading to a white color below. Juveniles have small yellowish-red or brownish spots scattered on the rear of their body and tail that fade with age.

Sand tiger sharks are ovophagous. Females have two uterine chambers where 16 to 23 eggs each are fertilized internally. Early in development the embryos receive their nourishment from their egg yolk. When they are about 10 cm (4 in) in length, the yolk is exhausted. At the same time the mouth of the embyro becomes functional and teeth are formed.

Eggs hatch in the uterine chamber when the embryos are about 17 cm (6.7 in) in length. The largest and most advanced embryo in each chamber (usually the first hatched) kills and consumes younger developing siblings (intrauterine cannibalism). After preying on their siblings, the two remaining embryos feed on any eggs present. After a gestation period of eight to nine months, two pups are born, one from each uterine chamber. Pups are 95 to 105 cm (37 to 41 in) long at birth.

Sand tiger sharks have the lowest reproductive rate known for sharks. They produce only two large pups, one from each uterine cavity, every two years.

They are strong but slow-moving, relatively sluggish sharks that spend most of their time near the bottom looking for food. They swim to the surface of the water to gulp and swallow air, retaining it in their stomach to create near neutral buoyancy that allows them to remain virtually motionless above the ocean floor. They are the only known shark to do this.

Usually not aggressive unless provoked, they have been known to be less tolerant of divers with spears and fins.

Like most sharks, sand tigers are able to detect electrical signals emitted by potential prey in the water column or substrate with specialized electrosensory organs on the sides of their head and lower jaw called ampullae of Lorenzini that enable them to find prey in murky water. They also have acute senses of smell, touch, and hearing. They have good vision, are very sensitive to low-light conditions, and are able to discriminate between light and dark objects. Their adaptations of electrical reception, smell, and hearing combine to make them efficient and feared predators.

The countershading of their body is a protective camouflage. If a predator looks down at the shark, its dark top blends into the dark ocean below. Viewed from below, the light color of the bottom of its body blends into the ligher water column above.

These sharks are known to live as long as 10 years in a protected environment. There has been a report of one shark that lived to be 16 years old. Life span in the wild is unknown.

Sand tiger sharks are listed as endangered on the IUCN Red List. They are protected in the United States, Australia, and New Guinea.

Fished commercially in all areas of their range, they are being pushed to commercial extinction because of overfishing. Their predictable habits, schooling, and low reproduction rates have all contributed to their serious population reduction.

The effective range of a shark’s ability to detect electrical signals is about 20 to 30 cm (1 ft.)

Sand tiger sharks are also known as spotted raggedtooth, ground, or gray nurse sharks. It is rumored that aquariums are the source of the “tiger” in the sand tiger name. Originally called sand sharks, the tiger was added to make them seem more ferocious. All sharks in this family swim slowly with their mouths open, exposing long, narrow, needle-like teeth. A fearsome sight, indeed!