Round Stingray (Round Ray) 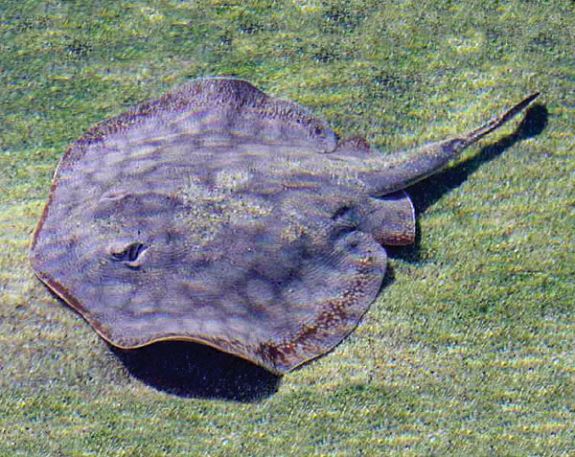 One of our round rays in the Ray Touch Pool. | © Aquarium of the Pacific 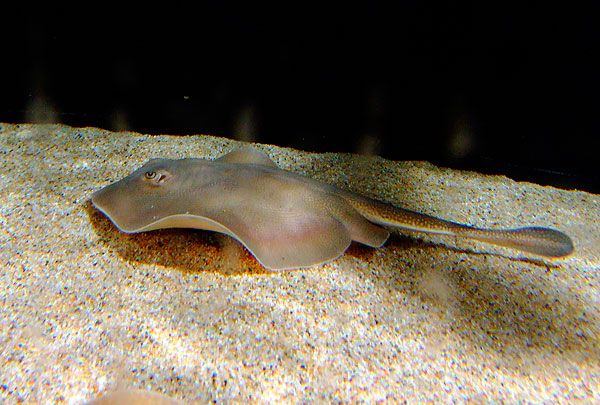 © H. Ryono, Aquarium of the Pacific

Our round stingrays feed on a diet of diced shrimp. Occasionally they also get capelin (a small smelt-like fish), clams, and squid. Round rays are on view in the Shorebird Sanctuary exhibit and in the Ray Touchpool on the second floor outdoors.

Round rays prefer sandy or muddy bottoms, but are occasionally found in rocky reef areas. They most commonly inhabit water depths from intertidal to less than 15 m (50 ft) in depth, but may also be found in water as deep as 91 m (300 ft). It is not unusual to find them in greater numbers at estuary mouths and shallow bays during breeding and pupping times of the year. Sloughs and beaches are other favorite areas.

As its common name implies, this ray’s smooth body or disc is nearly round. It does not have a dorsal fin. Its sturdy tail is less than half the length of its body and ends in a true caudal fin, unlike the thin whip-like tails of other stingrays that usually lack a caudal fin. The eyes and spiracles are on top of the head and the mouth, nostrils, and gill slits are on the ventral side. The sting is located on top of the tail about half way back from the base of the tail. An average sized ray usually has a spine that is 2.5-3.8 cm (1-1.5 in) in length.

Round rays vary in color from tan to brown to gray and from plain to spotted or mottled with varying pattern shades giving them a dappled appearance. The dappling is diffuse in most round rays, but in some, the patterns are well defined. The underside is a solid whitish or light yellow color.

The largest round ray reported had a total length of 58.0 cm (22.8 in). Maximum reported weight is approximately 1.3 kg (3 lb). Most round rays are much smaller than this and more commonly seen with a disc diameter of 25.4 cm (10 in) or less.

This species feeds mostly during the day, relying on sight and smell to locate prey items. The mouth and large fins are used to remove bottom sediment when exposing buried food. The diet consists primarily of bottom dwelling invertebrates such as worms, shrimp, amphipods, clams and other small mollusks, and small fishes. Although predominantly bottom feeders, they have been observed in the upper water column preying on small fishes.

These rays reach sexual maturity at two and a half years of age. Breeding is most common in March and April in southern California in temperate water, but may vary depending on location and water temperature, e.g., it takes place from February to March in the Gulf of California.

The electroreceptors of males become particularly sensitive during the breeding season and they localize a buried female by detecting her bioelectric fields. Fertilization is internal. Rays use a form of aplacental viviparity (formerly known as ovovivipary) referred to as aplacental viviparity with histrotroph; aplacental—without a placenta; viviparity—live birth; and with histotroph—some nourishment from uterine milk (histotroph) secreted from appendages in the female’s uterine wall.

Gestation lasts for about three months. Research has shown that initially, the embryo receives nourishment from the yolk sac. At about 45 days it also begins to be nourished by uterine milk. At two months of gestation the half depleted yolk sac shrinks and during the third and last month of gestation, the fetus receives all its nourishment from histotroph.

One to six pups are born live. The number of offspring depends on the size of the mother; larger females have more pups. The newborn vary in disk width from 6.3-8.0 cm (2.5-3.1 in). They are miniatures of the adults and independent at birth.

Round rays are good swimmers, propelling themselves by undulating the edges of their oversized pectoral fins. They are capable of substantial bursts of speed if needed. They cover themselves with mud or sand, leaving only the eyes and spiracles exposed, an excellent camouflage technique.

These rays are not aggressive and although they will permit some degree of approach by divers, they seem to prefer maintaining a safe distance from intruders.

The venom apparatus of stingrays is called the sting. It consists of the spine, its sheath, and venom glands. The spine is the rigid dentin surface of the sting. It is covered with a thin sheath of skin. The barbs are the backward facing serrations along the sides of the spine.

A groove on the underside of the ray’s spine contains the venom. When the spine is lying flat against the dorsal surface of the ray’s tail, it is bathed in a mixture of venom and mucus secreted from glands in the tissues. When the tail is stepped on or the ray encounters danger, it raises its tail, trashes it, and “strikes” with its sharp pointed spine. The sheath of skin breaks apart as it enters the skin of the victim, releasing the free-flowing venom. The serrated barbs help to tear the sheath and broaden the victim’s wound.

These animals are well adapted to their preferred habitat. Their flat bodies and coloration blend well with flat or slightly rough substrates and their dark backs and light undersides (countershading) provide a degree of camouflage when viewed from above or below. The spiracles on top of the head permit water inlet even when they are essentially covered with sand or mud.

Life span of these rays is estimated to be about 10 to 12 years.

These round rays are not included in the IUCN Red List.

Round rays are preyed on by northern elephant seals and larger fishes such as giant sea bass and sharks, especially leopard sharks. When fishing for bottom fish, recreational fishers commonly catch rays. They usually release them, but some fishers kill the ray before attempting to remove their fishing gear. They are infrequently used as food. There are minor commercial fisheries in Baja California and the Gulf of California.

A practical technique to avoid being stung when entering ocean waters where there is known to be congregations of stingrays is for waders to perform the “sting ray shuffle”, that is, to keep the feet flat on the bottom and shuffle along. If contact is made with a ray it will most likely swim off very rapidly. Generally not life threatening, a stingray wound can be serious and in extreme cases can cause a variety of systemic symptoms and complications.

The inshore waters at Seal Beach, California have the dubious distinction of having the most concentrated population of round rays on the Pacific Ocean’s east coast. As might be expected, it is also credited with having the greatest number of stingray incidents of any place in the world. Males are found in the warm waters of the outfall of the San Gabriel River in the spring, remaining until the fall. Females usually stay in the area for only a few weeks in June and July.

The round stingray is probably the most numerous of the rays in its distribution area and is the most likely to be involved with stingray injuries to waders and swimmers. The genus name, Urobatis, is based on two Greek words, oura’ and batis’ that translate as tail and ray.