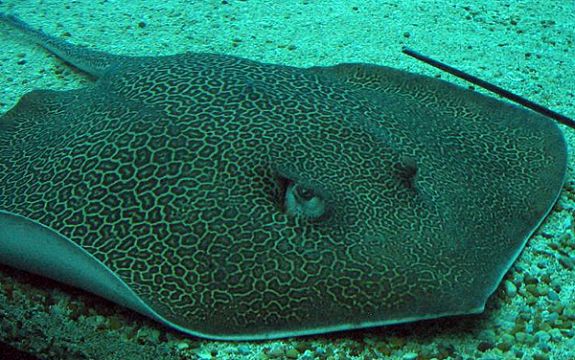 Our reticulate whipray, a female, was donated to us by the Landry’s Downtown Aquarium in Denver, Colorado. Our aquarists brought her from Denver to Long Beach by truck, a trip so long that a relief team of aquarists took over in New Mexico. Our ray, which weighs close to 136 kilograms (300 pounds), is one of the largest animals in the Aquarium’s habitats. She feeds on a diet of sardines, clams, squid and sometimes mahi. She lives in the large exhibit in Shark Lagoon.

A tropical and subtropical water inhabitant, like most rays this species prefers a substrate of sand and mud. They are commonly found in shallow lagoons and estuaries, off sandy beaches, and in the sandy areas of coral and rock reefs. They may also be found in deeper water to 50 m (164 ft). Although generally considered a marine species, they have been observed in fresh water.

The reticulate whipray is a large, disc-shaped ray with a moderately pointed nose and a very long, slender tail that may be three times the body length (if no harm has occurred to it as often happens). There is usually one sting, a highly modified dermal denticle, close to the base of the tail. The sting has sharp saw-tooth edges over about 75 percent of its length. Each tooth faces backward like a barb on a hook. In adults there is a row of flat denticles along the midline of the back.

The upper surface of juveniles is a base color of light brown with well-delineated dark spots. As the ray ages, the spots modify in size and shape and develop the close black and brown reticular pattern of the adults. The ventral side is white. The tail has black and white colored bands behind the sting.

These rays are bottom feeders for the most part. Their diet consists primarily of small fishes and a variety of invertebrates including crabs, bivalves, worms, shrimps, and sea jellies. They use their pectoral wings to uncover hidden prey.

Sexes are separate and fertilization is internal. Reproduction in whiprays is called ovoviviparity or aplacental viviparity with histotrophy. In its early developmental stage, the embryo receives its nutrition from the egg yolk. Then it breaks and sheds the thin membrane of the egg capsule and receives its nourishment from a fluid called histotroph or ‘uterine milk’ which is secreted from villi, appendages in the wall of the female’s uterus. These uterine extensions also provide the embryo with oxygen and remove its waste.

Three to five pups are born during the summer months. At birth they are about 90 cm (35 in) in total length with a disc diameter of about 20 cm (7.9 in). The pup emerges tail first with its pectoral fins wrapped around its body. Its spines are pliable and encased in sheaths, preventing injury to the female during birthing. The natal sheath is discarded and the spines harden soon after birth. The pups resemble miniature adults and are independent at birth. Mating occurs again shortly after the birthing process.

These rays swim by moving the edges of their pectoral wings to create S-shaped waves that move vertically from head to tail creating a flying motion. The tail is thought to be used for balance and steering and to support the sting. Bottom dwellers, they use their wings to uncover buried prey and to cover themselves with silt. When buried, they avoid inhaling mud or sand by breathing through spiracles on the top of the head instead of through their buried gills.

The sting, spine, and barb are different parts of the ray’s venom apparatus. The sting refers to the entire structure consisting of the spine, its sheath, and venom glands. The spine is the rigid dentin surface of the sting. It is covered with a thin sheath of skin. The barbs are the backward facing serrations along the sides of the spine.

Two grooves on the underside of the ray’s spine contain the venom-secreting material. When the spine is lying flat against the dorsal surface of the ray’s tail, it is bathed in a mixture of venom and mucus. When the tail is stepped on or the ray encounters danger, it raises its tail and “strikes” with its spine. The sheath of skin breaks apart as it enters the skin of the victim, releasing the free-flowing venom. The serrated barbs help to tear the sheath and broaden the victim’s wound.

This species has not been evaluated by the IUCN Red List.

Not highly regarded as a food fish, it still has fairly high commercial value. It is commonly taken in ray fisheries and may be marketed locally. It is not uncommon for it to be taken as bycatch in trawling operations and other types of fisheries. Because of its size and strong swimming ability, it is favored as a sport fish by some fishermen. Leather made from the hide of the reticulated whiptail ray is considered to be of high quality and is used in the manufacture of belts, purses, boots, and other useful items. The tail is sold as a curio and parts of the fish are used in Asian homeopathic medicine. These rays are heavily preyed on by sharks, especially hammerheads.

Scientists believe that the high nutrient value of the lipid and protein-rich uterine milk (histotroph) that nourishes stingray embryos is the reason for their 3,000 to 5,000 percent weight increase during development. Rays are the only vertebrates that have such a remarkable weight gain during fetal development.

In 2002 fossilized coral estimated to be 350 to 400 million years old was found when a low tide exposed it on a reef off the coast of Alaska’s Prince of Wales Island. Fashioned into polished slabs for inlays in men’s jewelry, it was named stingray coral. The pattern on the cut surfaces was thought to resemble the pattern on the skin of reticulate whiprays.

The reticulate whipray is also called the leopard ray, honeycomb stingray, and reticulate whiptail ray. It is one of about 20 ray species in which the common name includes whipray. This ray’s dorsal side is covered in an intricate pattern of conspicuous dark spots from which it gets the reticulate part of its common name. It inhabits tropical and subtropical waters in sandy areas of coral reefs and in lagoons and estuaries.