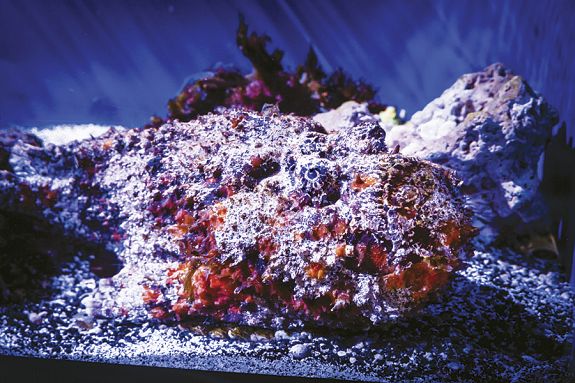 Stonefish are on view in the Jewels exhibits in the Tropical Pacific Gallery. | Andrew Reitsma/Aquarium of the Pacific

This species lives in the Indo-Pacific Ocean, from the Red Sea and East Africa to French Polynesia, north to the Ryukyu and Ogasawara Islands, and south to Queensland, Australia.

Reef stonefish live in reef flats and shallow lagoons with rubble or sandy areas and in small pools during low tide, where they are well camouflaged on the substrate.

Their warty, scaleless skin is commonly brown or grey, possibly with patches of orange, red, or yellow and occasionally covered in algae. Reef stonefish have a robust body. The eyes are separated by a deep depression. They have a large upturned mouth and fleshy pectoral fins. It has twelve to fourteen needle-sharp, dorsal spines with a venom sac at the bottom of each of spine.

Commonly grows up to 16 inches (40 centimeters).

These fish feed on other reef fishes and bottom-dwelling invertebrates.

Reef stonefish are solitary except during the mating season, when they will aggregate with others. The female will lay her gelatinous egg mass while swimming across the seafloor. Males will then follow, releasing their sperm as they swim over the newly laid eggs.

Except for the mating season, this is a solitary fish. It will use its pectoral fins to scoop out sand to partially bury itself and stay motionless, waiting for prey to pass by. When prey passes by, the fish will suddenly open its large mouth, sucking in the prey. It is more active at night than during the day.They only use their venomous spines for defense, injecting venom into its victim like hypodermic needles.

The stonefish’s coloration, skin texture, and upturned mouth help it blend in perfectly with rocky areas on the seafloor. This camouflage is an adaptation that allows the fish to use ambush to capture prey.

This species can live between five and ten years.

While this species has not been evaluated by the International Union for Conservation of Nature (IUCN), it faces threats from pollution and habitat loss.

One of five stonefish species, this well-camouflaged fish is one of the world’s most venomous. It is typically found motionless on the seafloor, appearing to be a stone or piece of coral. Their scaleless, warty skin is commonly brown or grey, possibly with patches of orange, red, or yellow and occasionally covered in algae. Their thirteen dorsal fins can inject an extremely poisonous venom. This solitary fish is found in the Indo-Pacific Ocean.